Interviewed at their home in Greenpoint, where the two also host small Pizzeria LaFerrera gatherings on the weekends for groups of new and old friends. Jason LaFerrera is a web developer with HyperHyper and his wife Molly Baker is a freelance graphic designer. 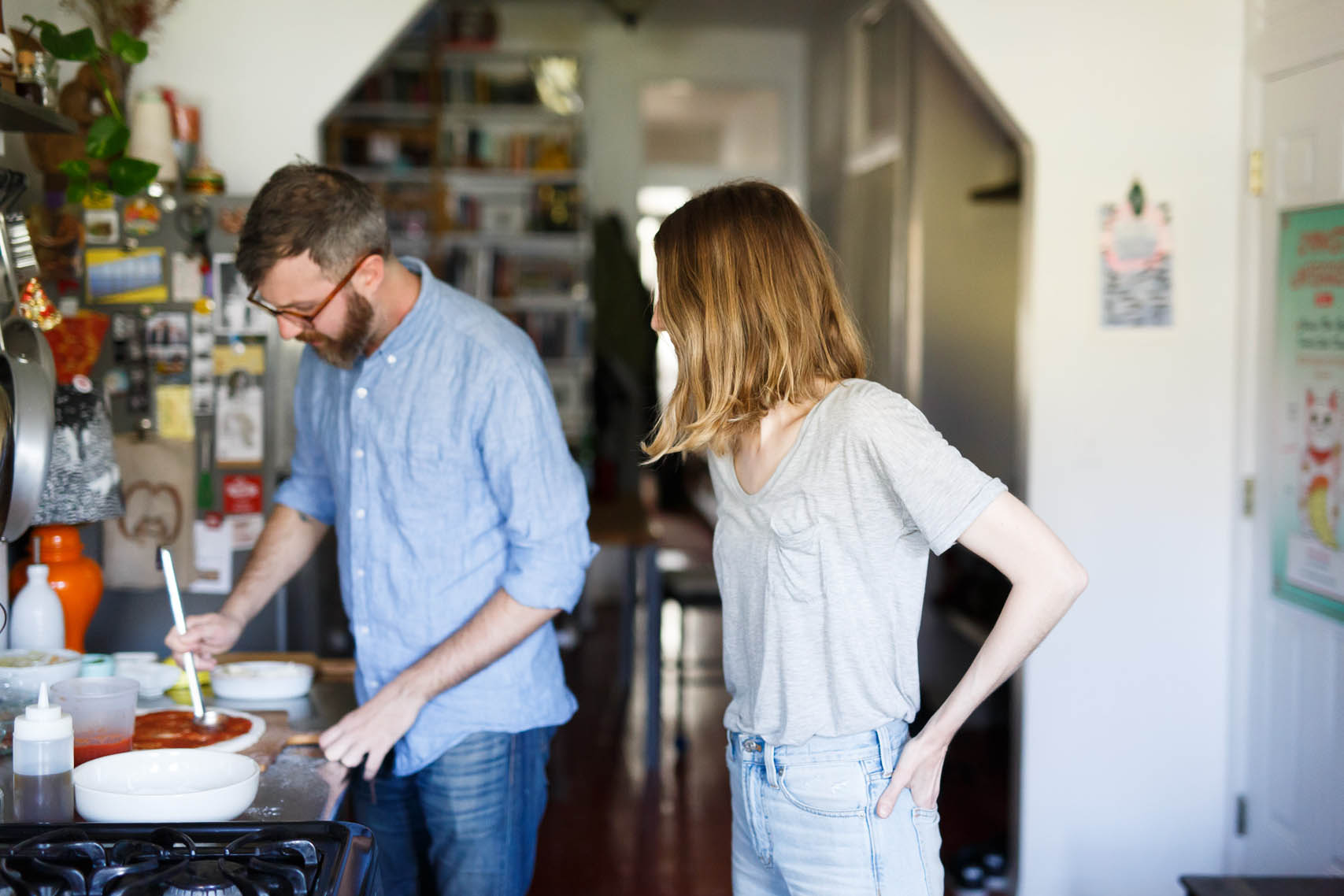 Before there was pizza

JASON: We both had been living in Richmond for a very long time and overlapped. And when I moved to New York, Facebook was like ‘people you may know’ and I was like ‘I know who that girl is. Sure, I’ll add her as a friend. Sure, I’m going to start flirting with this girl.’

MOLLY: I definitely knew his name. I had never hung out with him, but I was aware of him.

JASON: We had mutual friends. I was teaching at the time. When I was in Richmond, I was working at this restaurant, and recording bands and Molly dated this dude that was in a band.

MOLLY: I was the front row girlfriend. 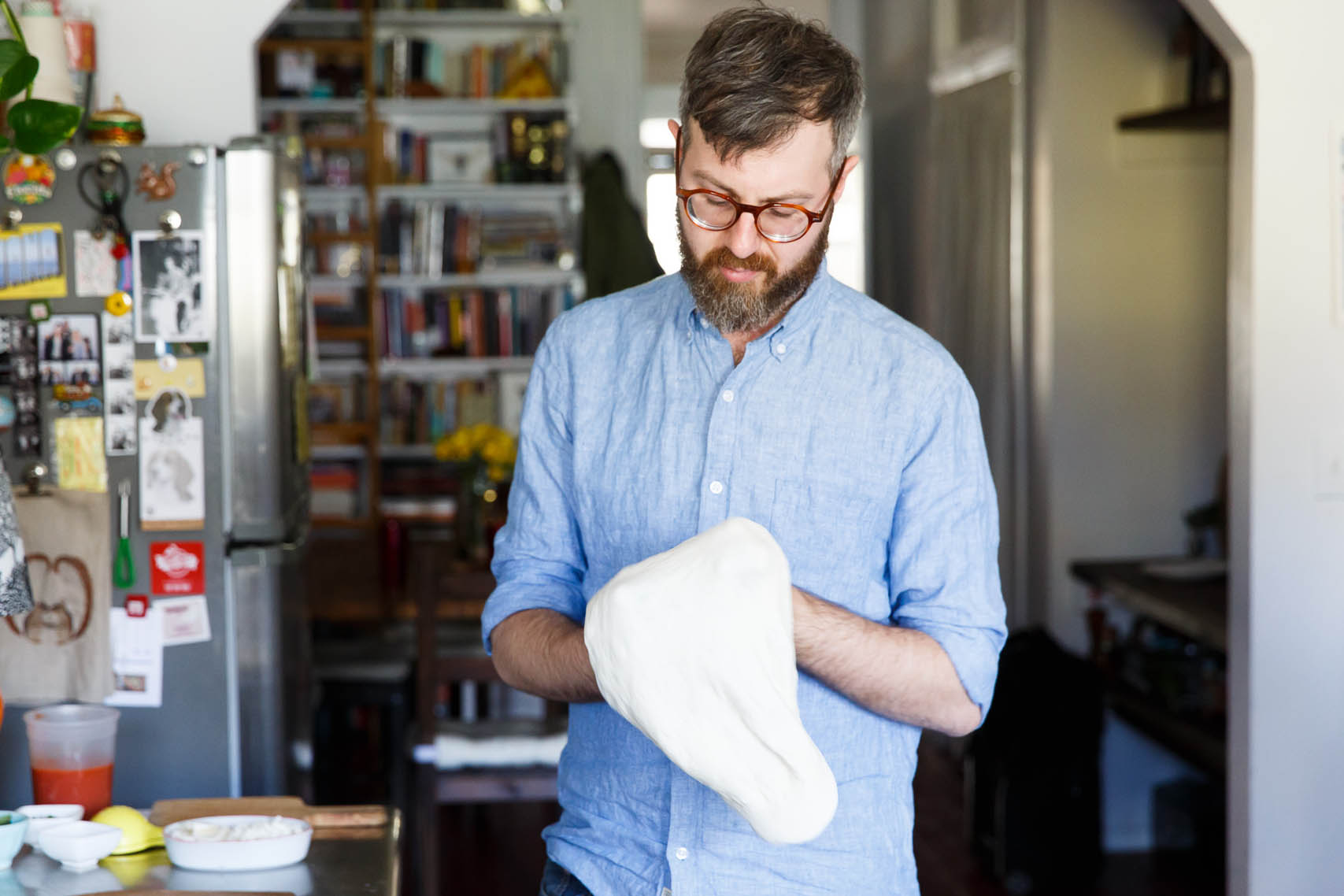 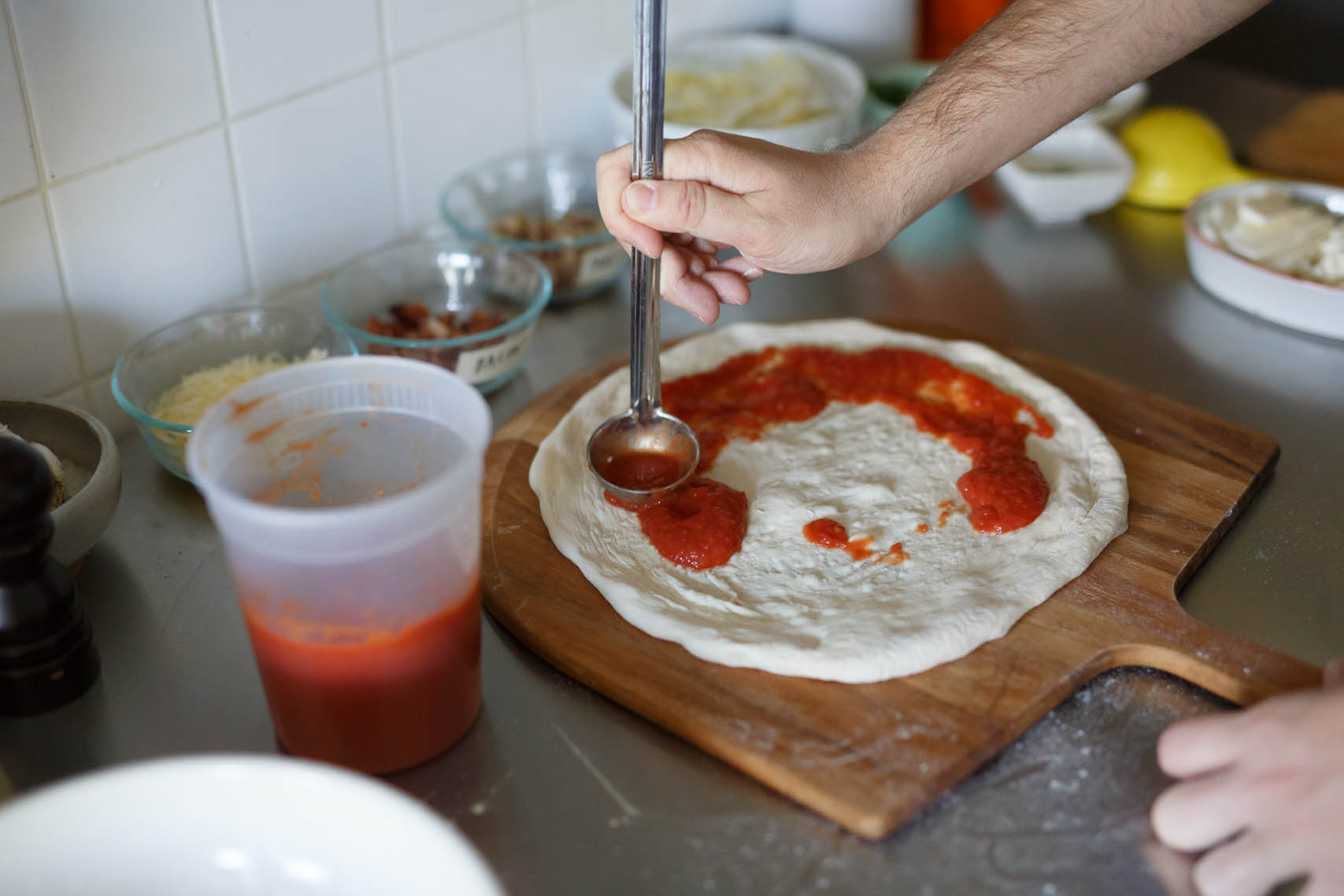 JASON: I then moved to Morocco for three years. I was teaching math there. It was this American high school. Everyone was getting ready to go to US colleges. So I was like I should really finish my degree. That’s when I moved to New York. I didn’t know anyone.

JASON: So started flirting on messenger.

MOLLY: Jason was finishing up school and super busy, so we couldn’t really do anything officially. Then we made a pizza date. 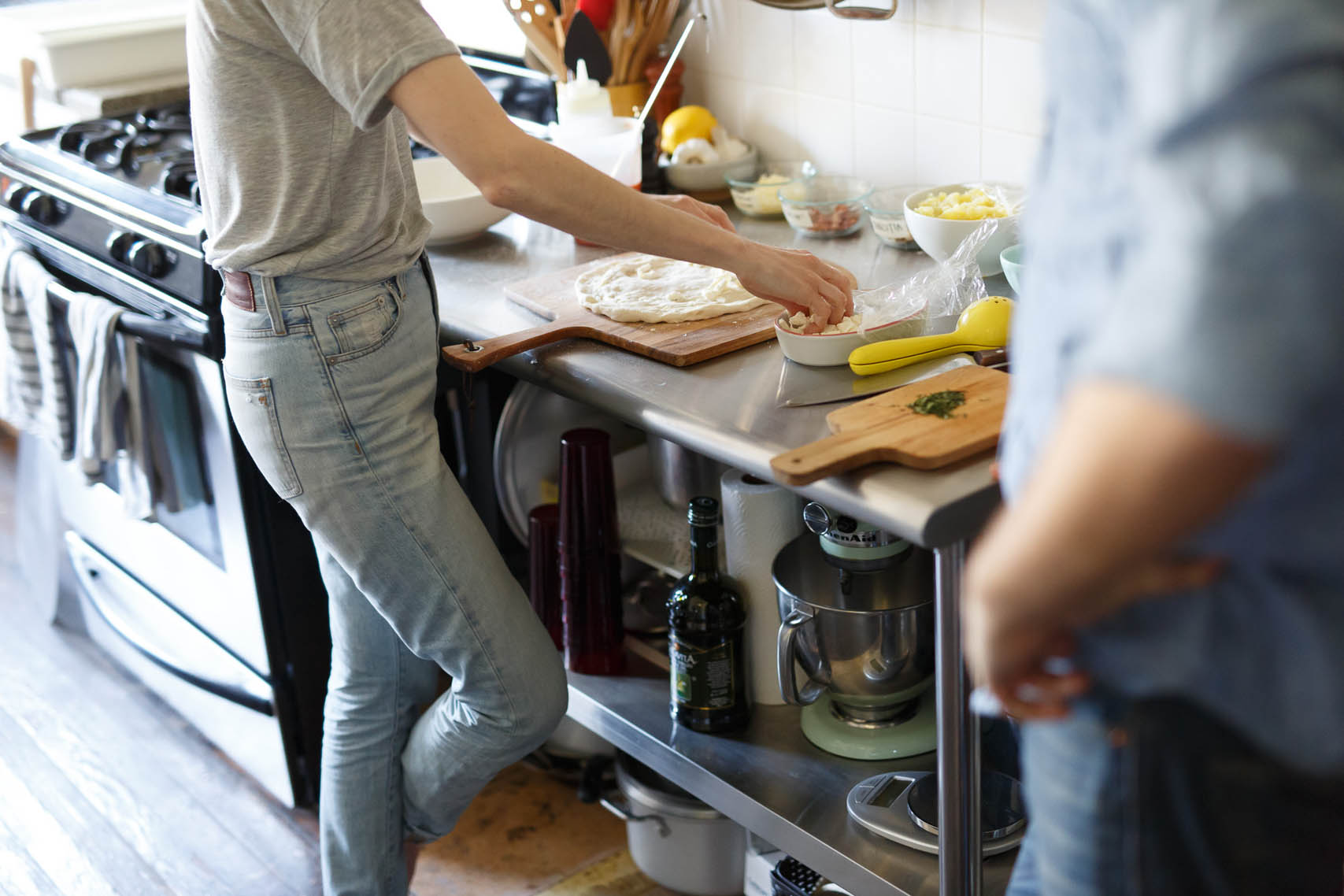 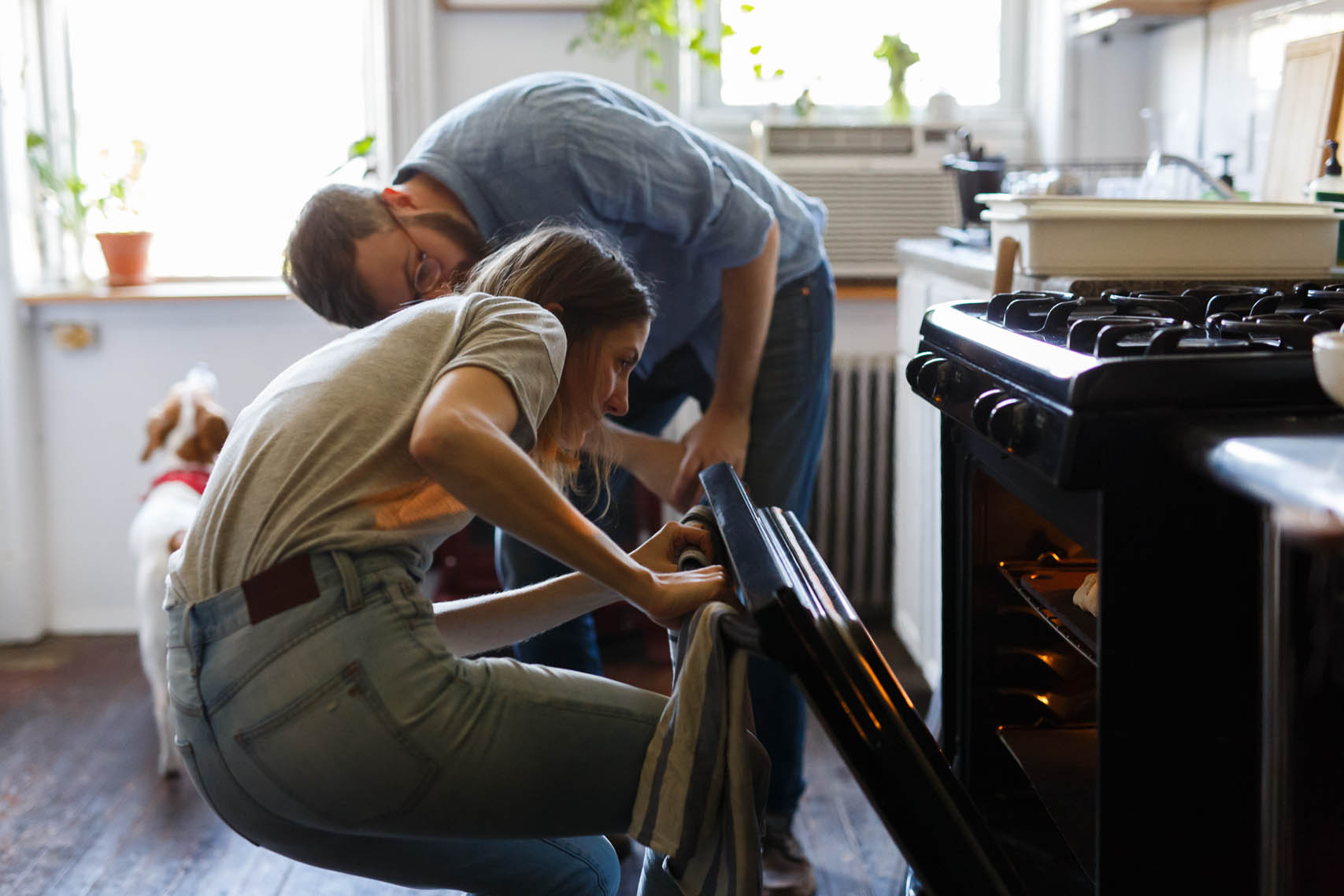 JASON: All of our chats were like ‘check out this pizza thing.’ Our relationship started pretty fast.

MOLLY: It was super natural. It wasn’t awkward. On our first date we hung out until 6am.

MOLLY: It was really chill. I was like ‘that was too easy.’ 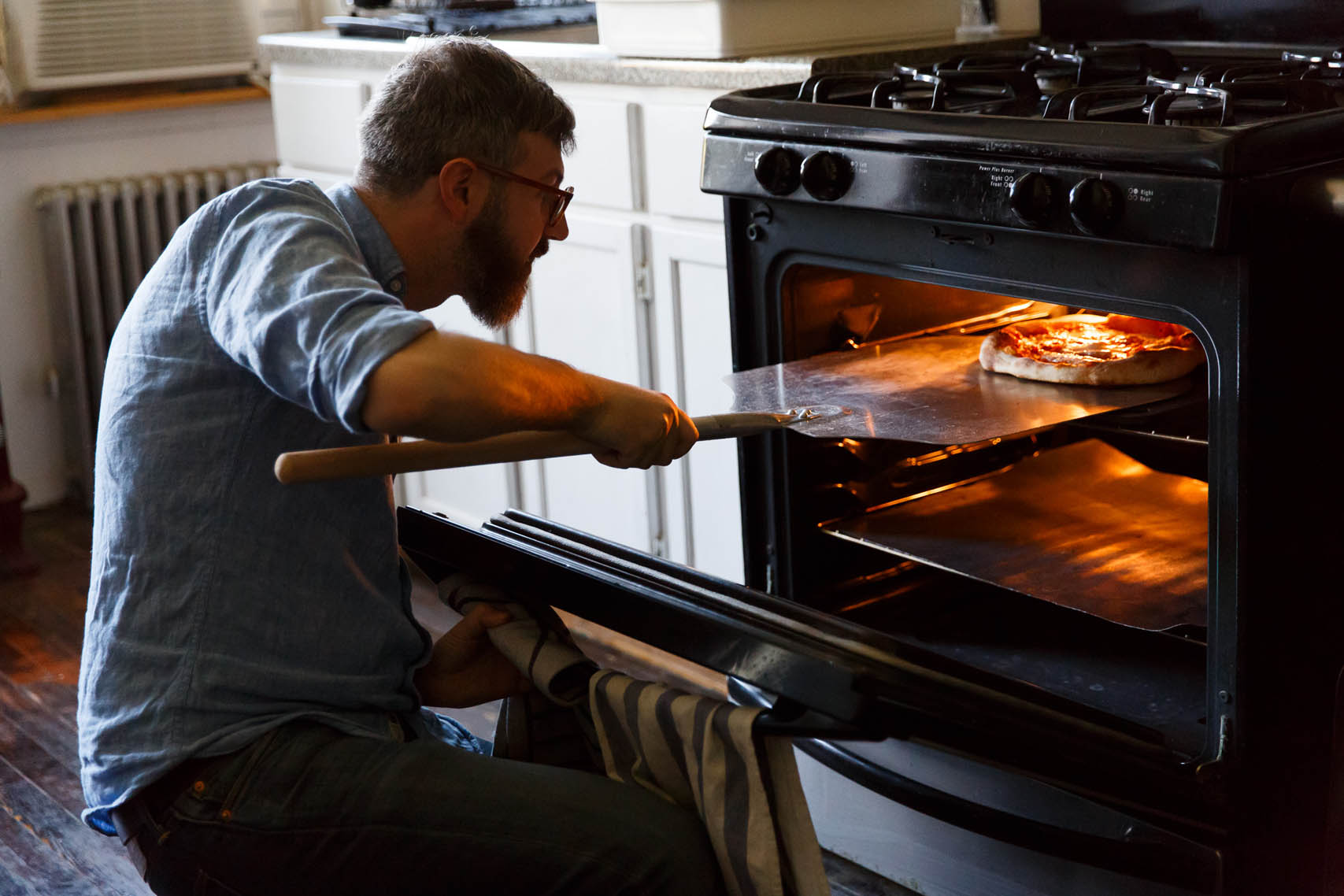 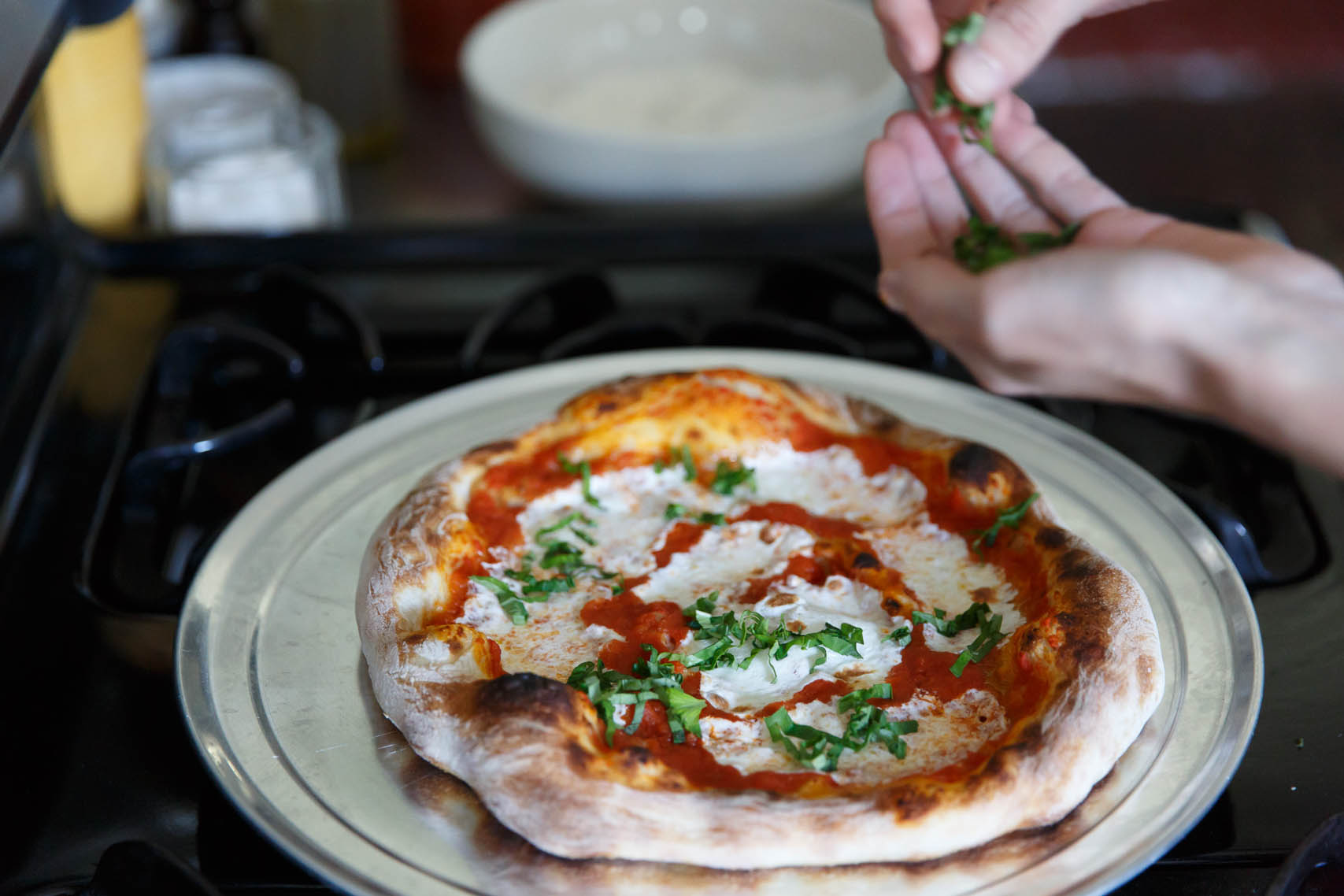 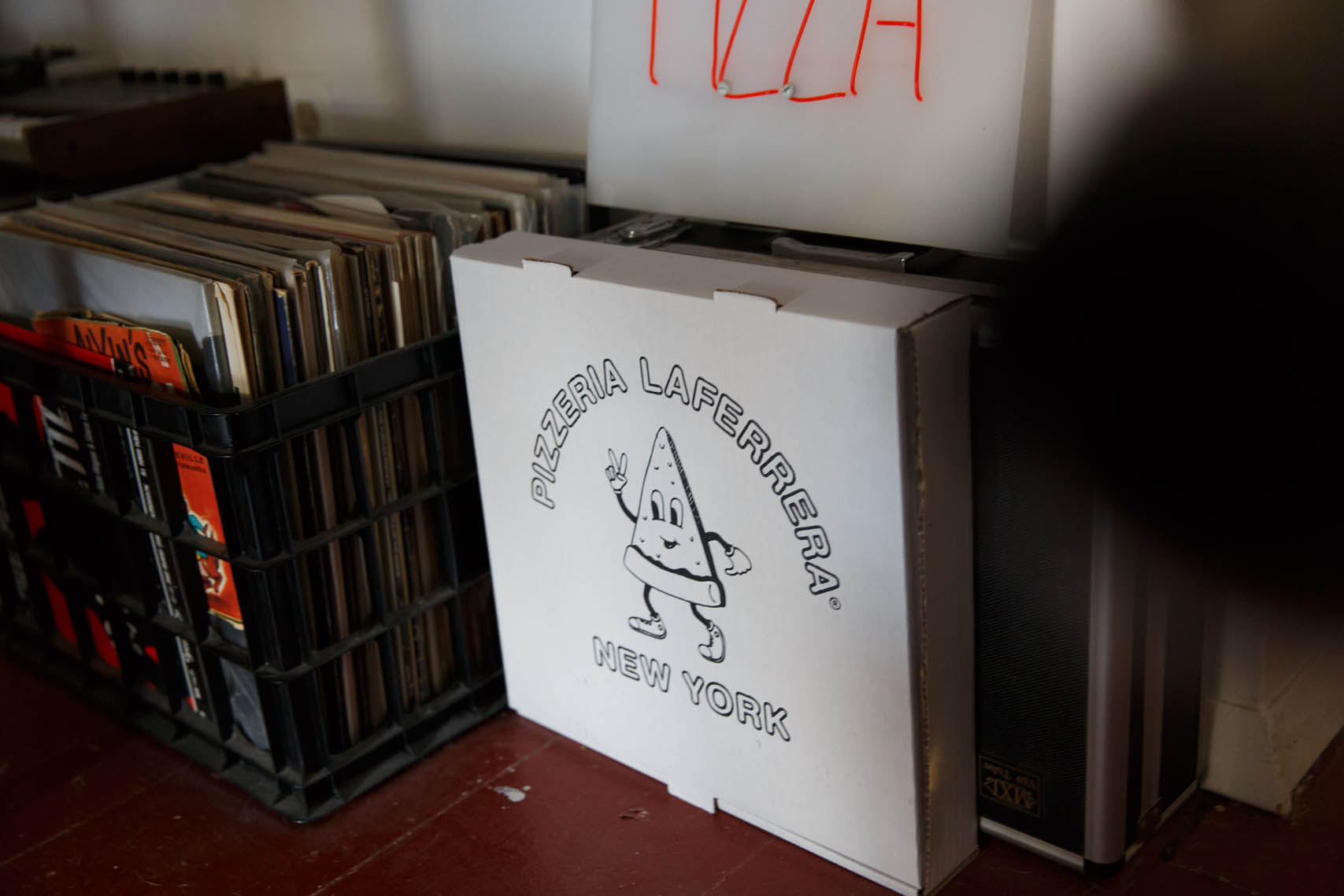 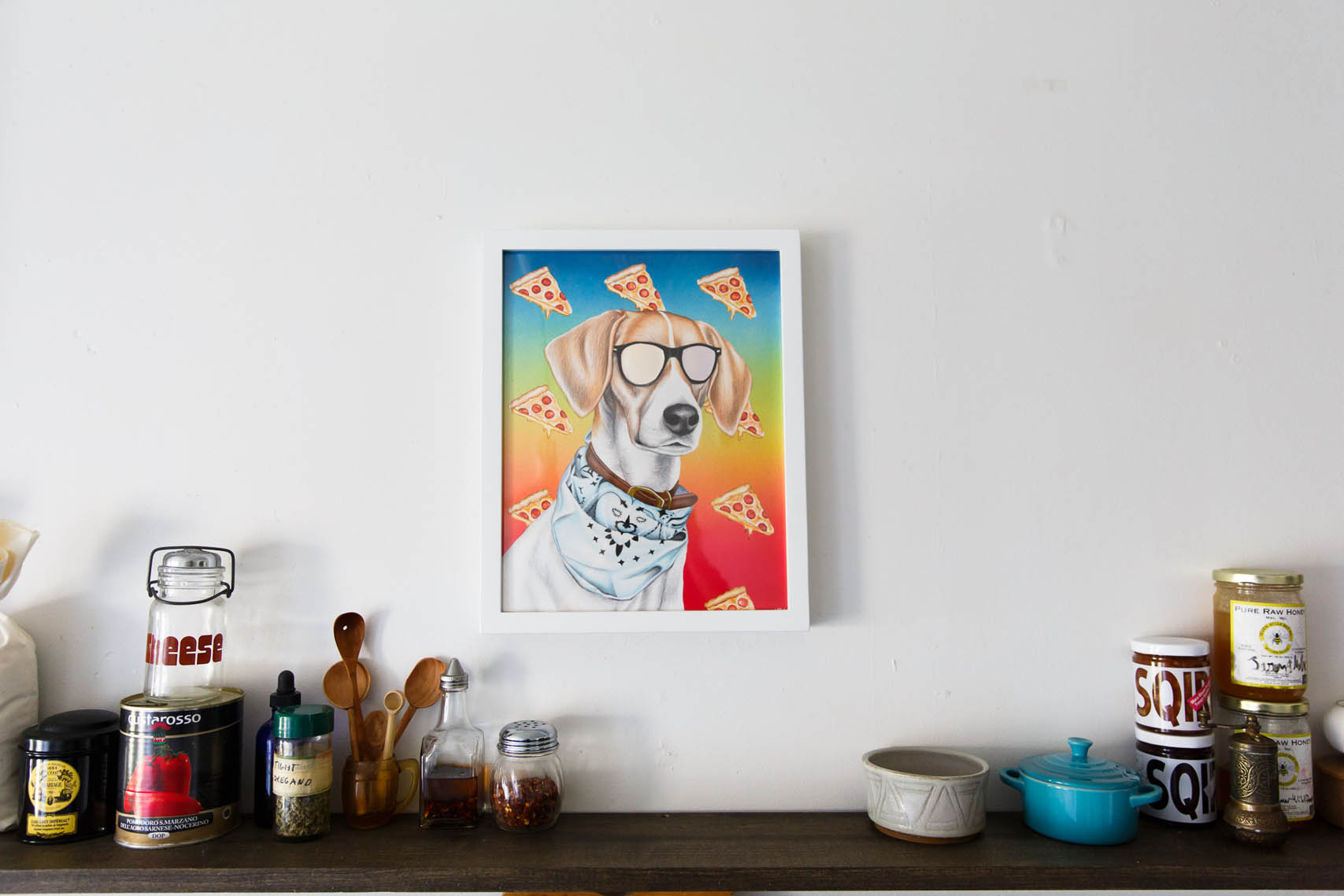 JASON: I was working at a project for Vice at the office. We went to Paulie Gee’s for our date and then I was like let’s keep hanging out. But we didn’t want to go to a bar so I was like let’s go to the office there are video games there. We watched the sunrise.

MOLLY: Everything was so natural. There weren’t any decorations on love. I haven’t had to work really hard. Things progressed smoothly. When we first started dating, I had been working full time and then I quit. I started working with a friend and we were both in this limbo in our lives. So we both moved to Bushwick to this crazy loft space like ‘let’s live and work together.’ When the whole living with roommates thing wasn’t working for me Jason's lease was ending. We were both ready to make a change and had been spending all our time together...so we moved in.

JASON: We moved into the apartment above my old apartment. It was a seamless transition.

MOLLY: I found this space when Jason was in Shanghai for work and I was Craigslist stalking. I ran over here with my checkbook and was like ‘ok we’ll take it.’

Everything was so natural. 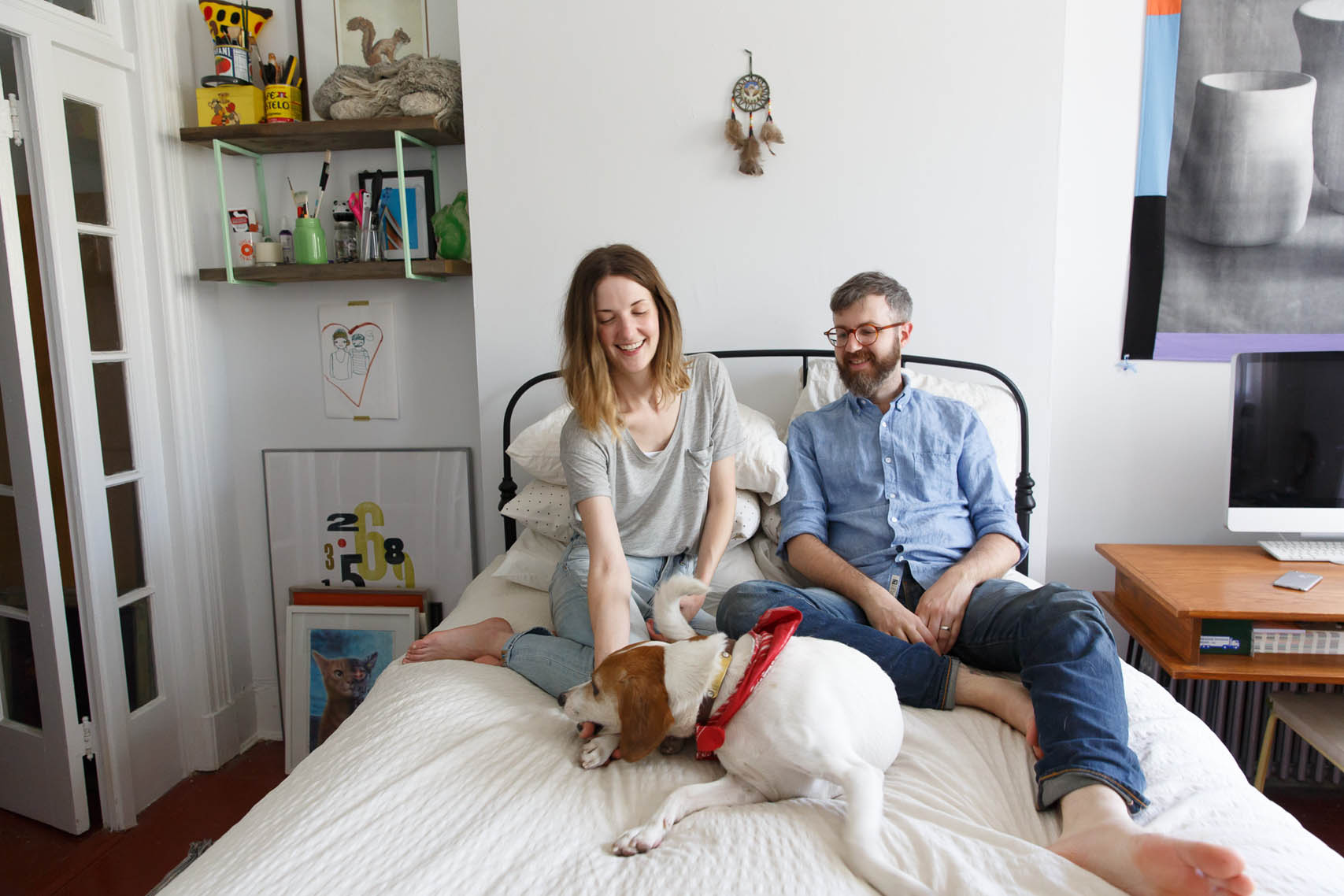 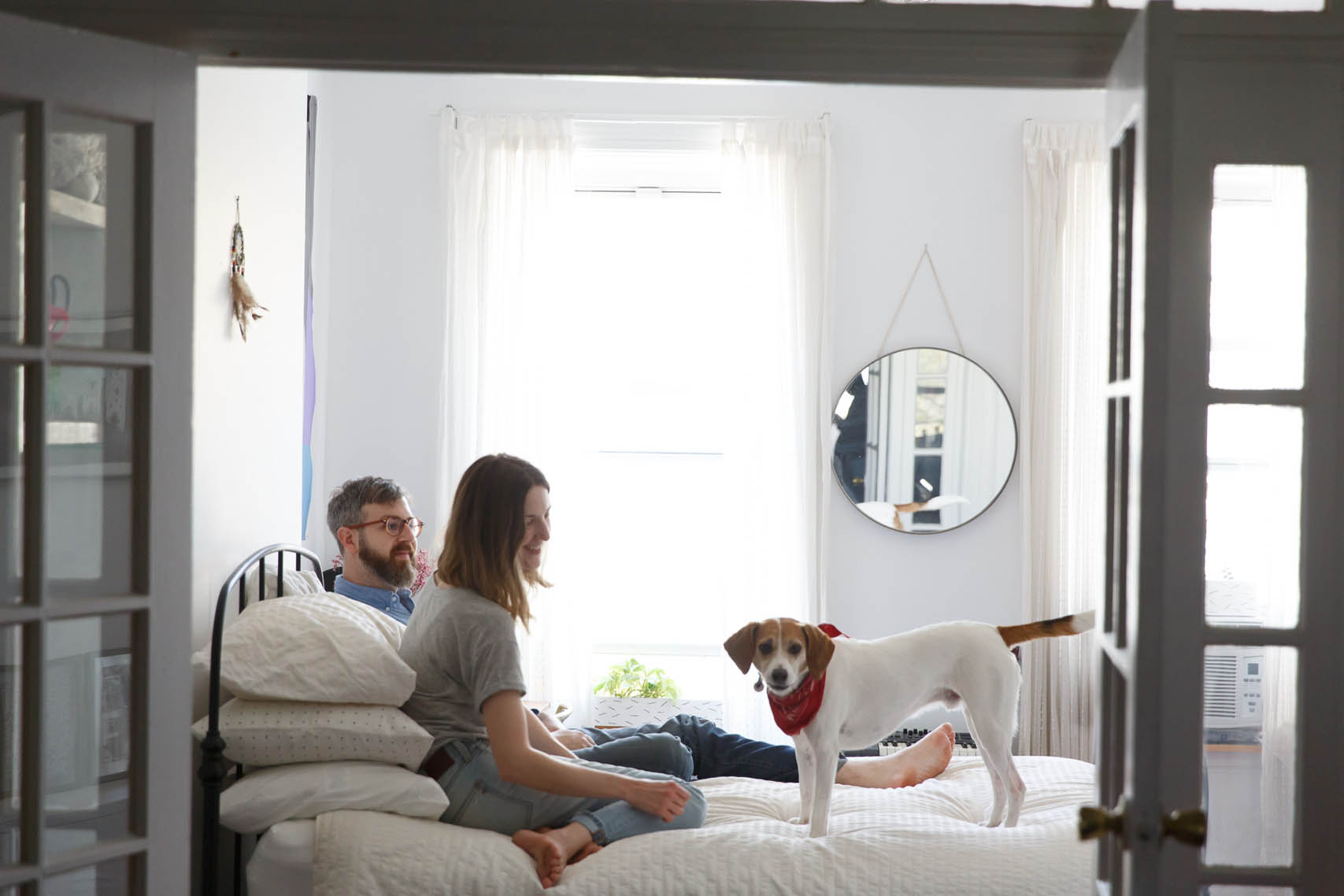 JASON: My buddy, Champ, worked at Schematic forever and Schematic got acquired and a bunch of people jumped ship. He and a few other guys started HYPERHYPER right when I was finishing school. When I went back to school I went for math but took one computer science class and was like this is what I want to do. Champ was living in New York and was like you should work for me. He hired me straight out of college and I learned really fast. Everyone kind of has an idea and you make it up as you go along. Now I only do Phhhoto stuff. We had a holiday party three years ago and Champ and I figured out how to make a photo booth. Now it is its own company.

MOLLY: I work from home. I sit at the coffee table or dining room table. I’m now working a lot with this friend I met when I was working at Martha Stewart. We’re really lucky to have friends that are doing awesome things. We have a really rad community of people that are doing fun things.

Everyone kind of has an idea and you make it up as you go along. 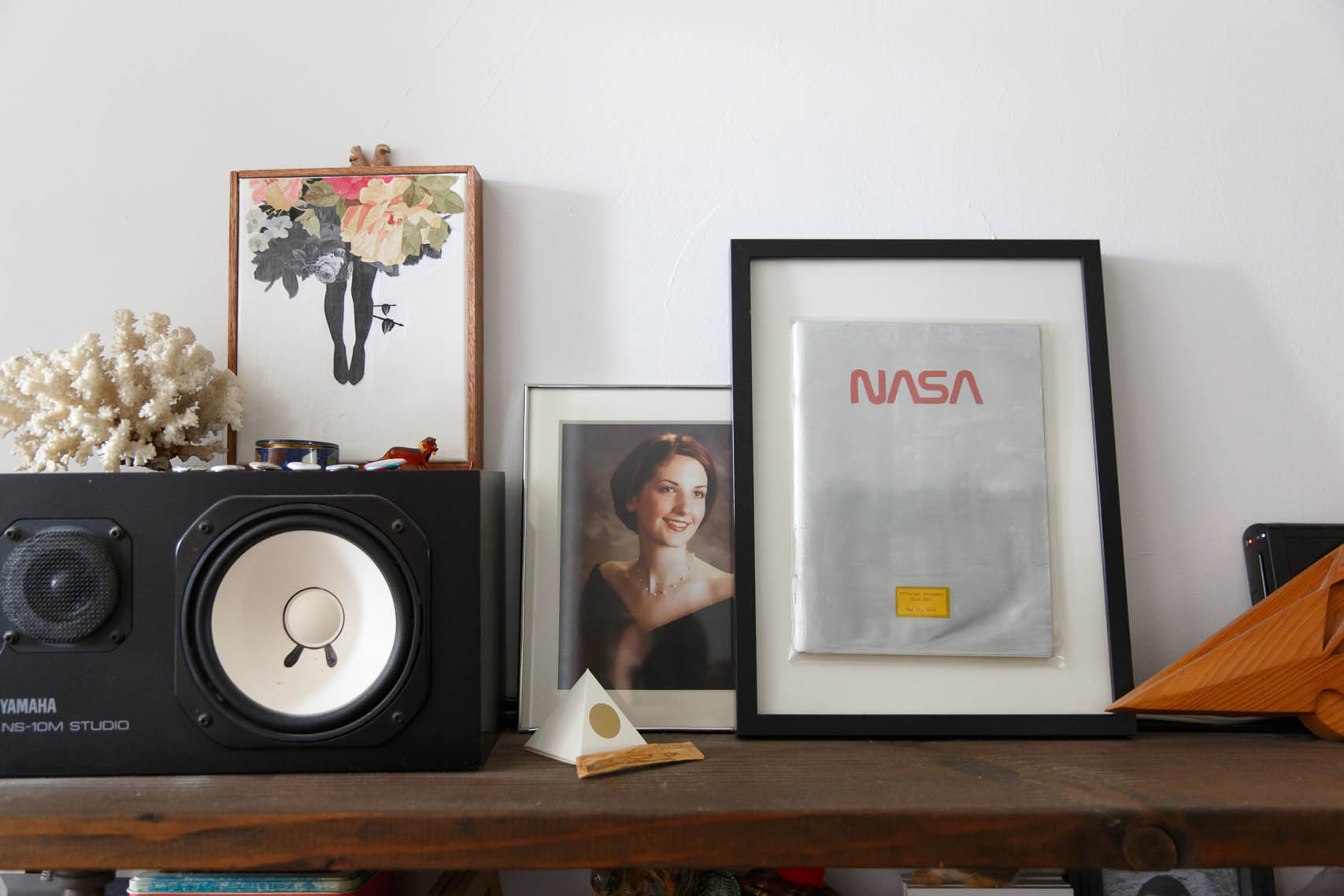 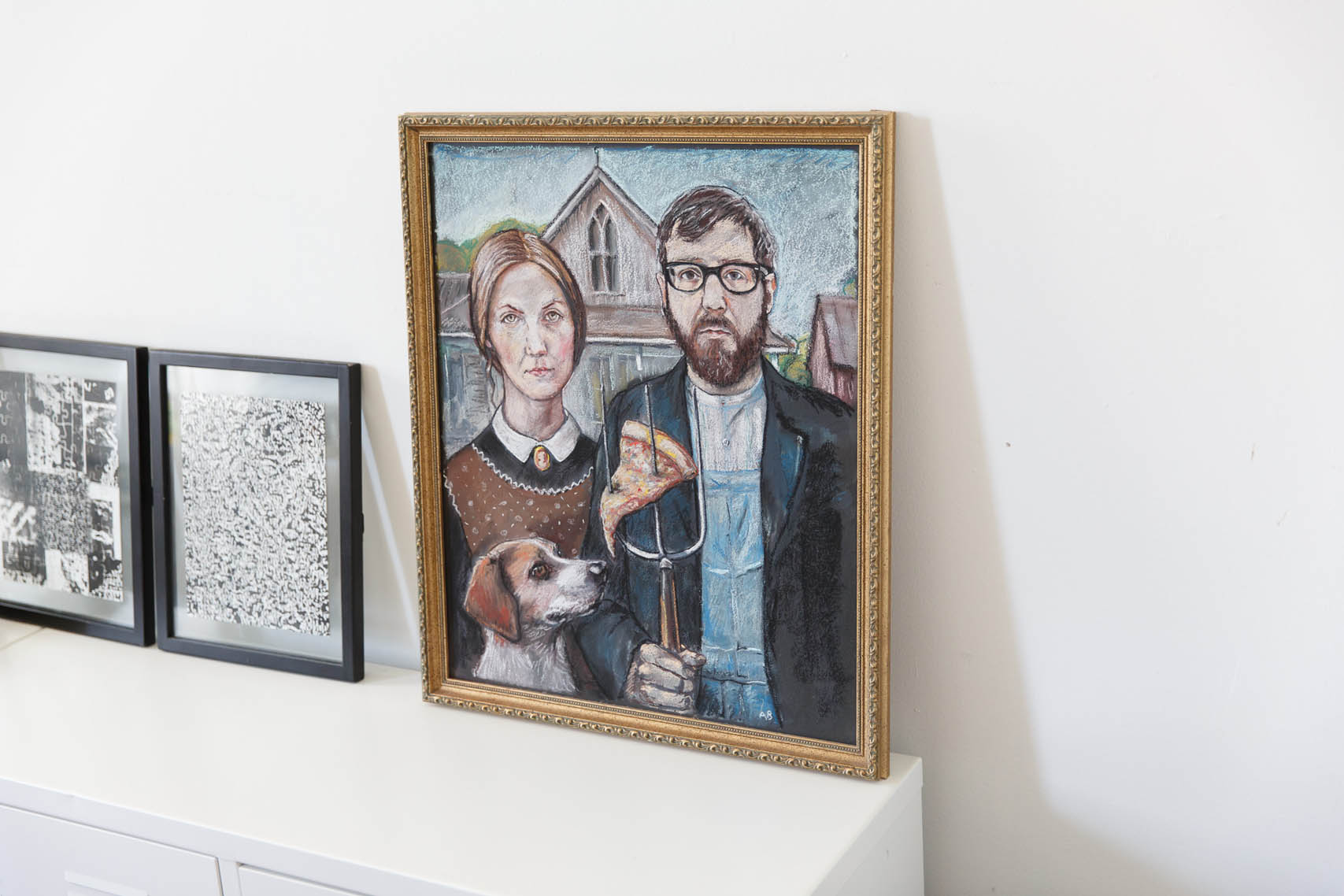 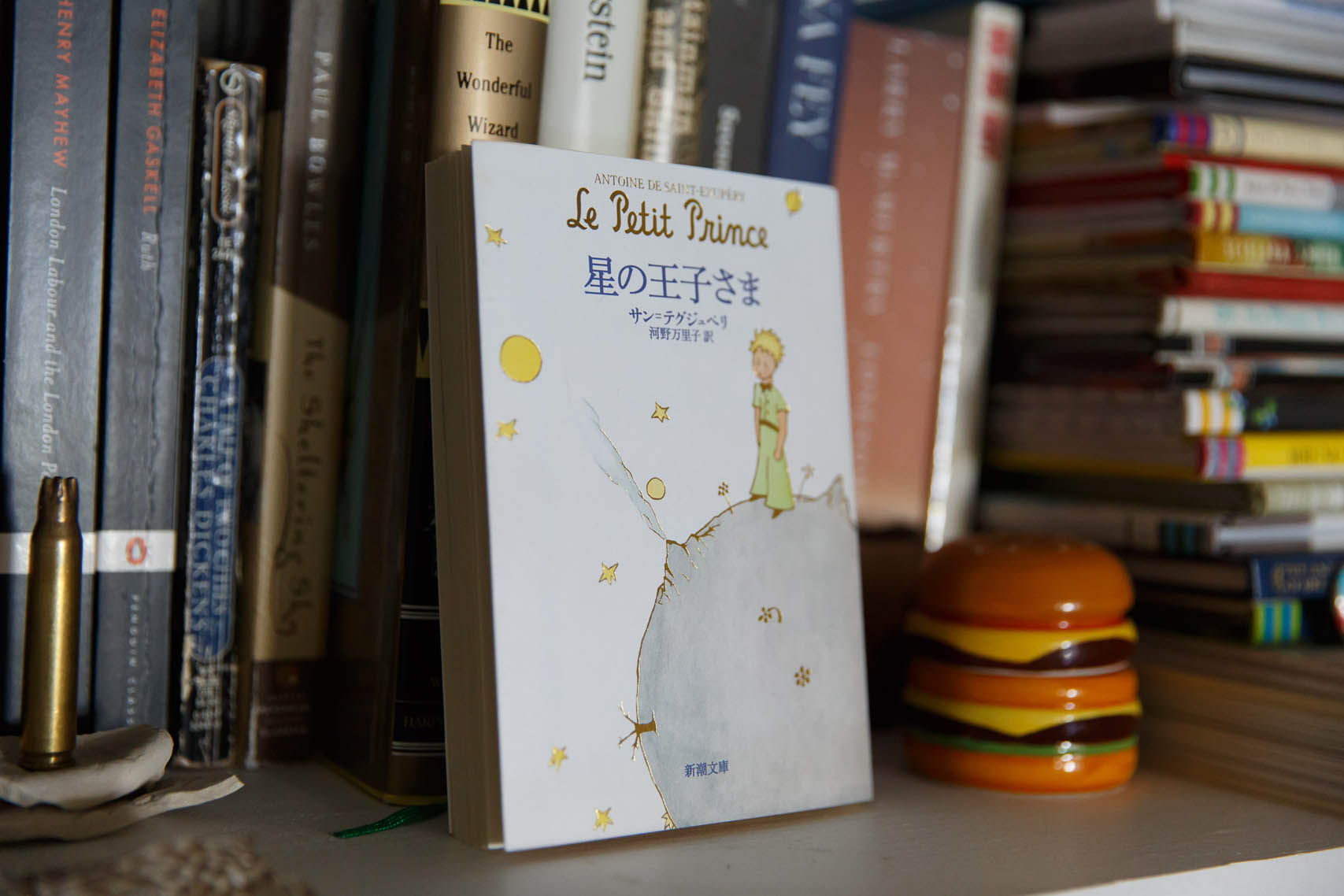 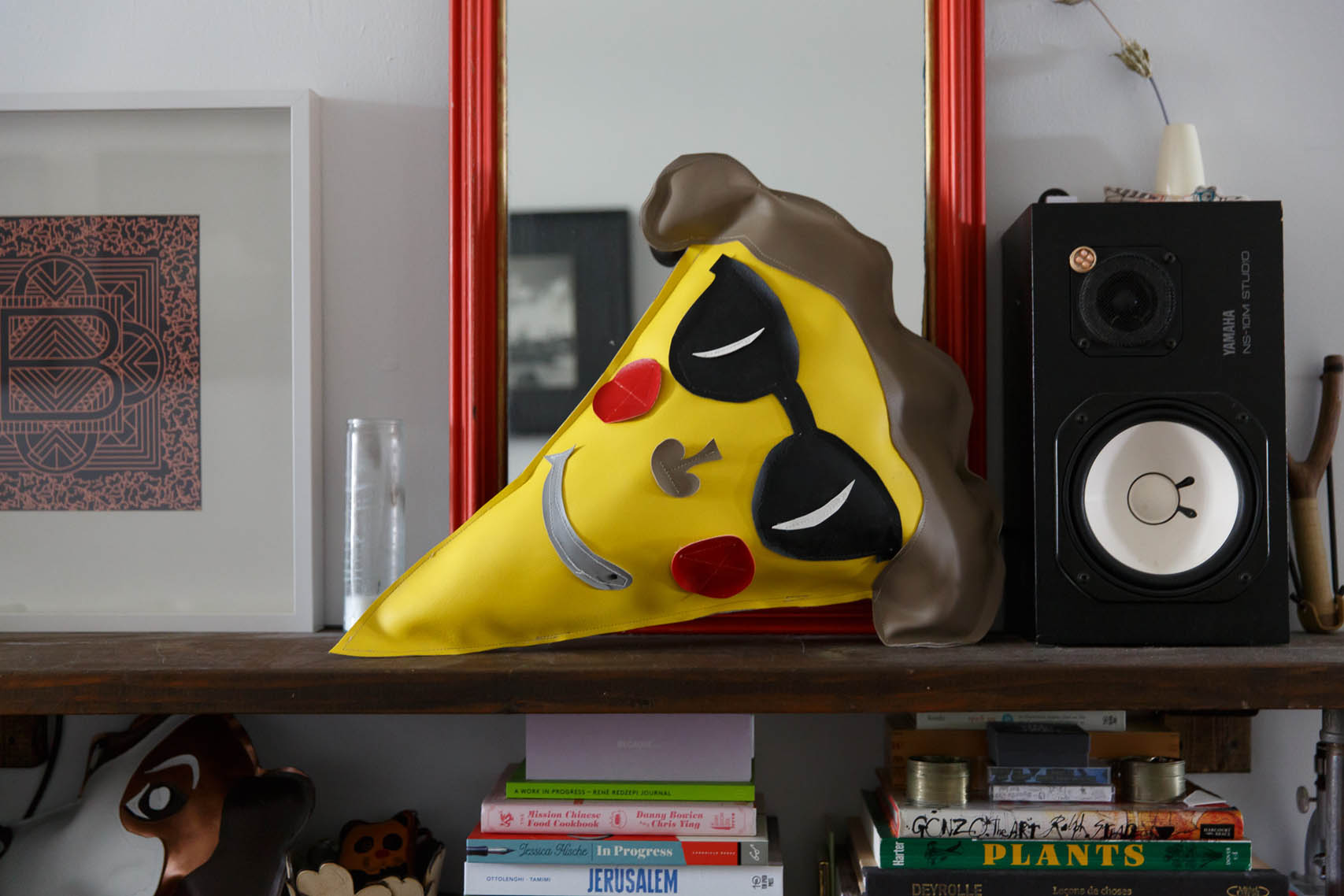 JASON: We went to Naples on our honeymoon. And we were like this is so good, let’s figure this out.

MOLLY: We spent six months super focused on getting married. Then when we came home from Naples and we were like ‘what’s our new hobby?’ So we started making pizza. We like entertaining and having people over, and nobody is going to say ‘no’ to pizza. We got excited about it. It just happened. 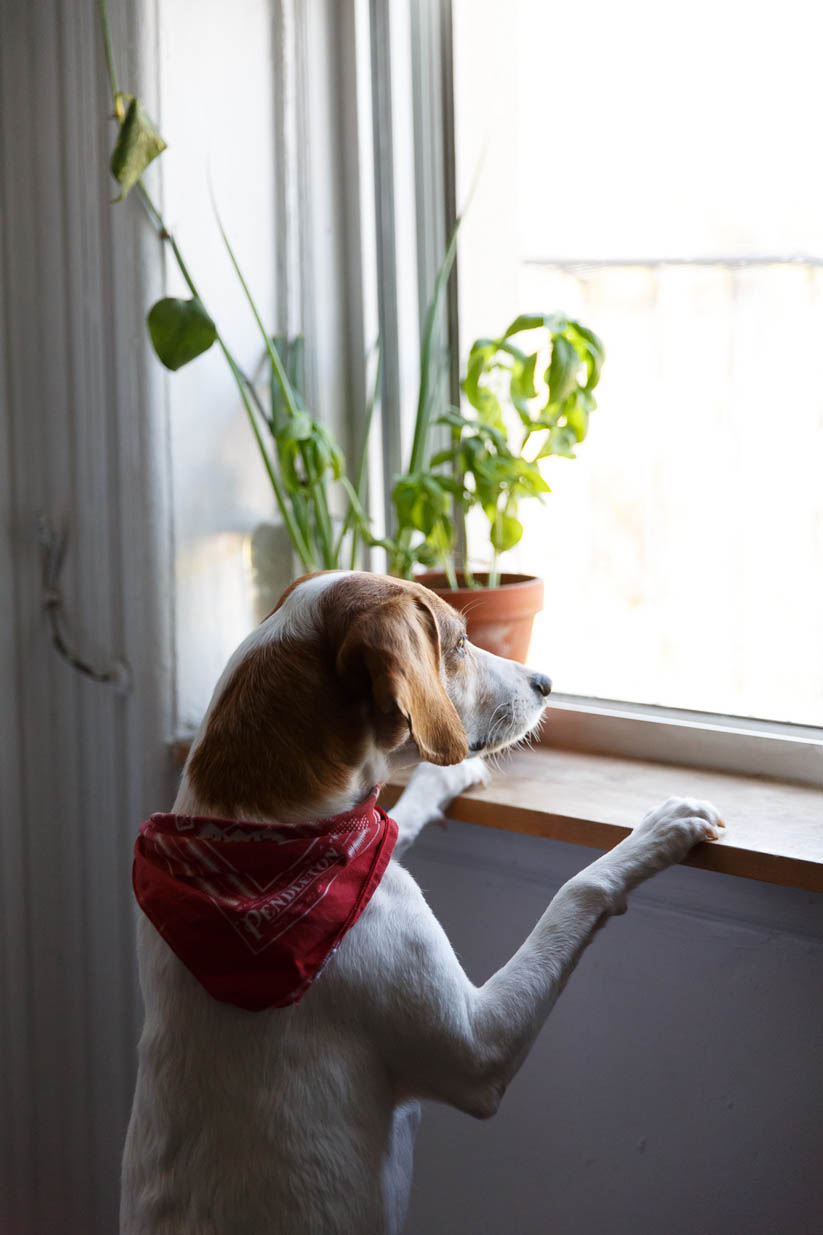 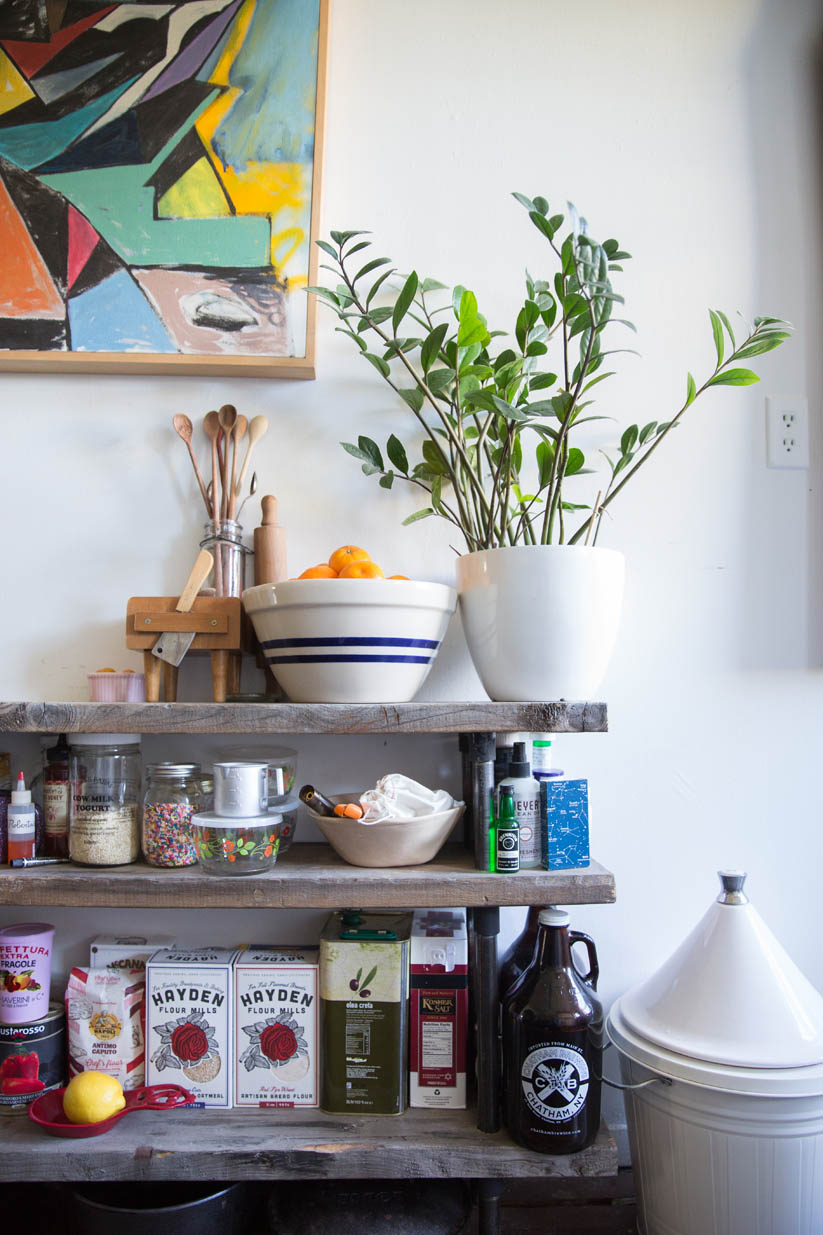 MOLLY: It was so random. It was on Halloween. Jason was like let’s go to Paulie Gee’s and get pizza. I was like ‘no, let’s just go home and order Minnie’s and watch tv.’ But he insisted on going. We ordered pizza and our drinks. Jason slides this box across the table and says ‘oh yeah I was thinking we could like get married or something.’ So I was like ‘oh ok sure.’ I knocked the wine glass off the table.

JASON: I was anxious. I spent a long time looking for a ring. That’s where our first date was.

MOLLY: It was really unexpected.

‘oh yeah I was thinking we could like get married or something.’ 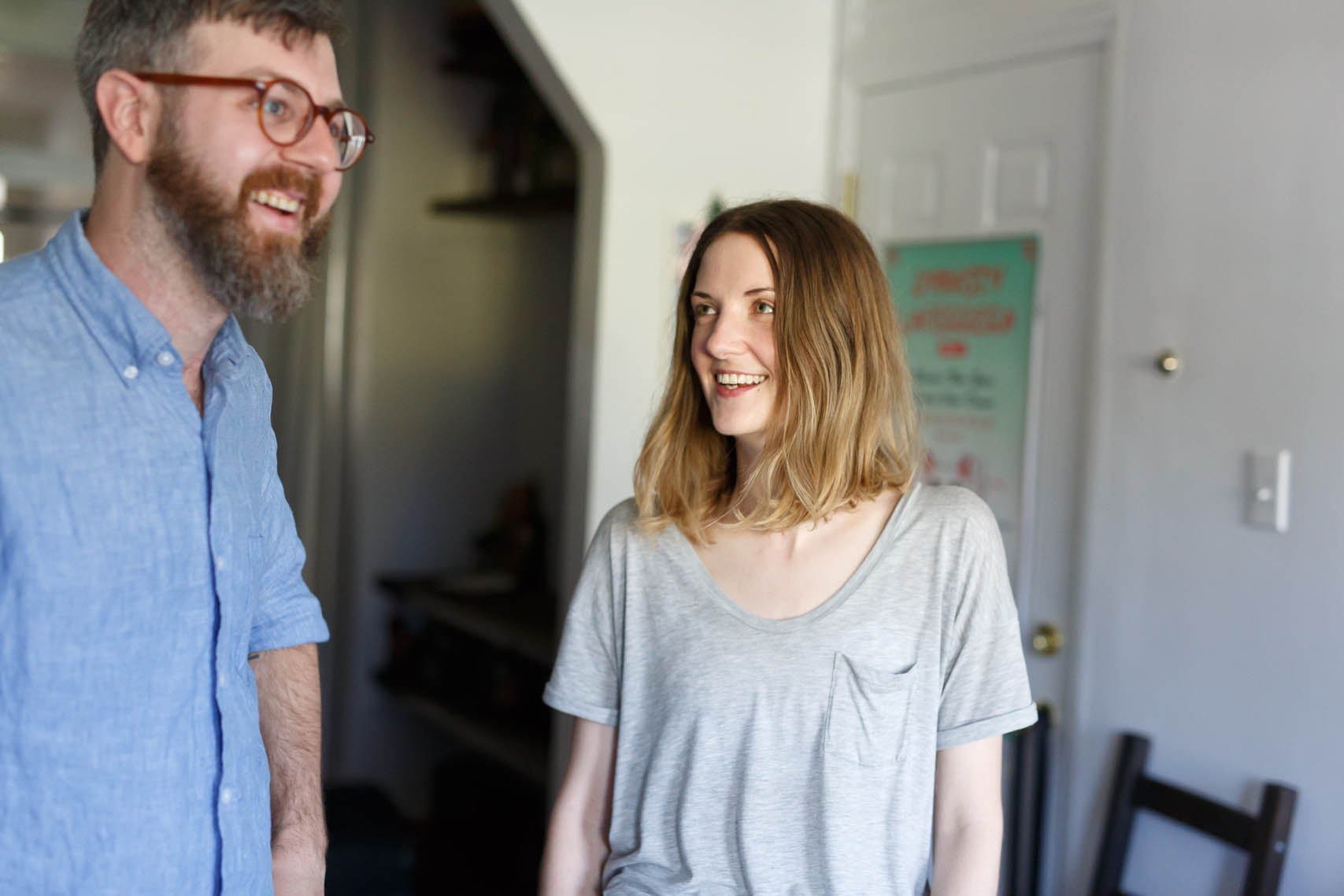 MOLLY: It was never a dream of mine to have to get married. It just made so much sense. Being married feels the same as it felt prior.

JASON: We got married in Richmond, Virginia at Richard Neutra’s house.

MOLLY: We were probably one of the last weddings there. 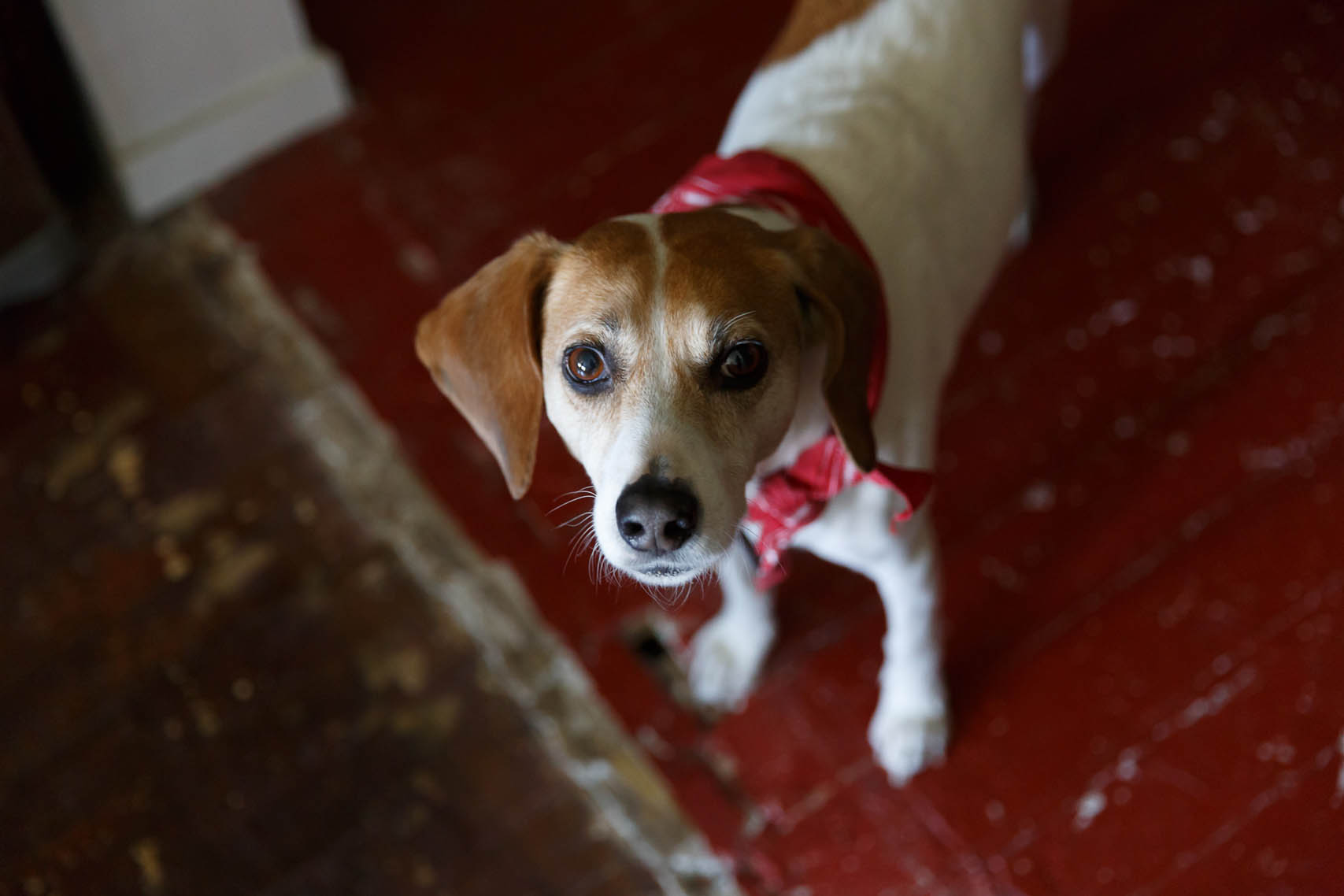 JASON: Friday we let off some steam. We try to do some stuff. We’ve been doing so much freelancing sitting in front of the computer working on Saturday. By 6, we need to get out of the house. We’ll go eat, hang out with friends, drink beers.

MOLLY: We went to a party last weekend and I was like this is so weird, I don’t like this. We’re much more of the ‘go to our friends house and hang out.’ Pizza. Go to the grocery store. Hang out on Sunday night. It’s really great. All my friends were on match.com and OkCupid and every weekend they had tons of dates lined up and that just was so not my style. I knew that when I found someone I would find it when I wasn’t trying and that is how all my relationships have worked. Naturally I would just meet somebody. 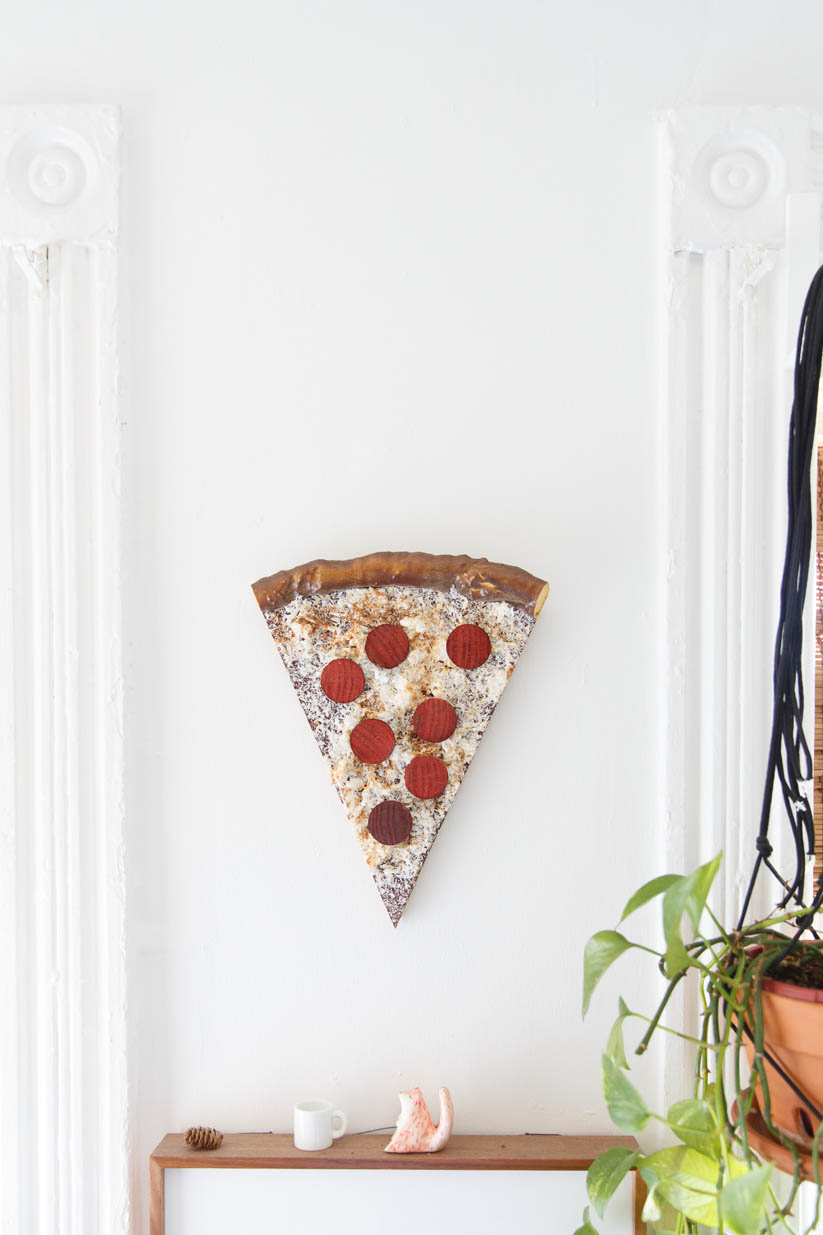 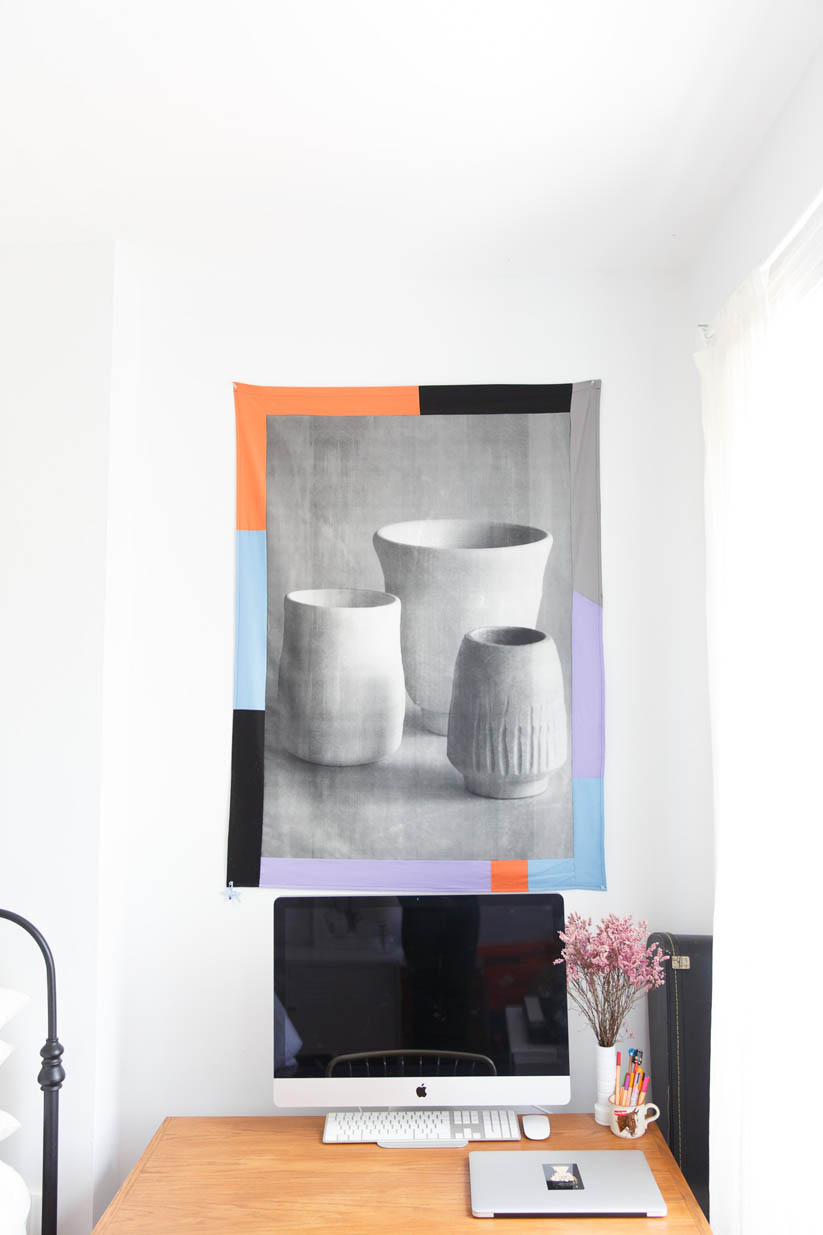 JASON: Sometimes things are frustrating, sometimes things are annoying and terrible. When we were first starting out with Pizzeria LaFerrera it was terrible. We had no idea what we were doing. It’s awesome to see the progress. Pizzas are never round. The first ones were gross looking like the shape of California. We would read these books and watch Youtube videos. The dough sticks and all the cheese slides off and it starts smoking. The fire alarm goes off. One time Molly whisper/yelled to me ‘we are never doing this again.’

MOLLY: It was the worst. Things were on fire and it was really stressful.

JASON: We get to meet really awesome people, that’s by far my favorite part of Pizzeria LaFerrera. You know those friends that you meet in New York and you make plans with once a month but someone always bails? We are forced to hang out with our friends once a week. There is something about knowing how your partner reacts to things. We don’t go overboard or get stressed out about things.

There is something about knowing how your partner reacts to things. We don’t go overboard or get stressed out about things. 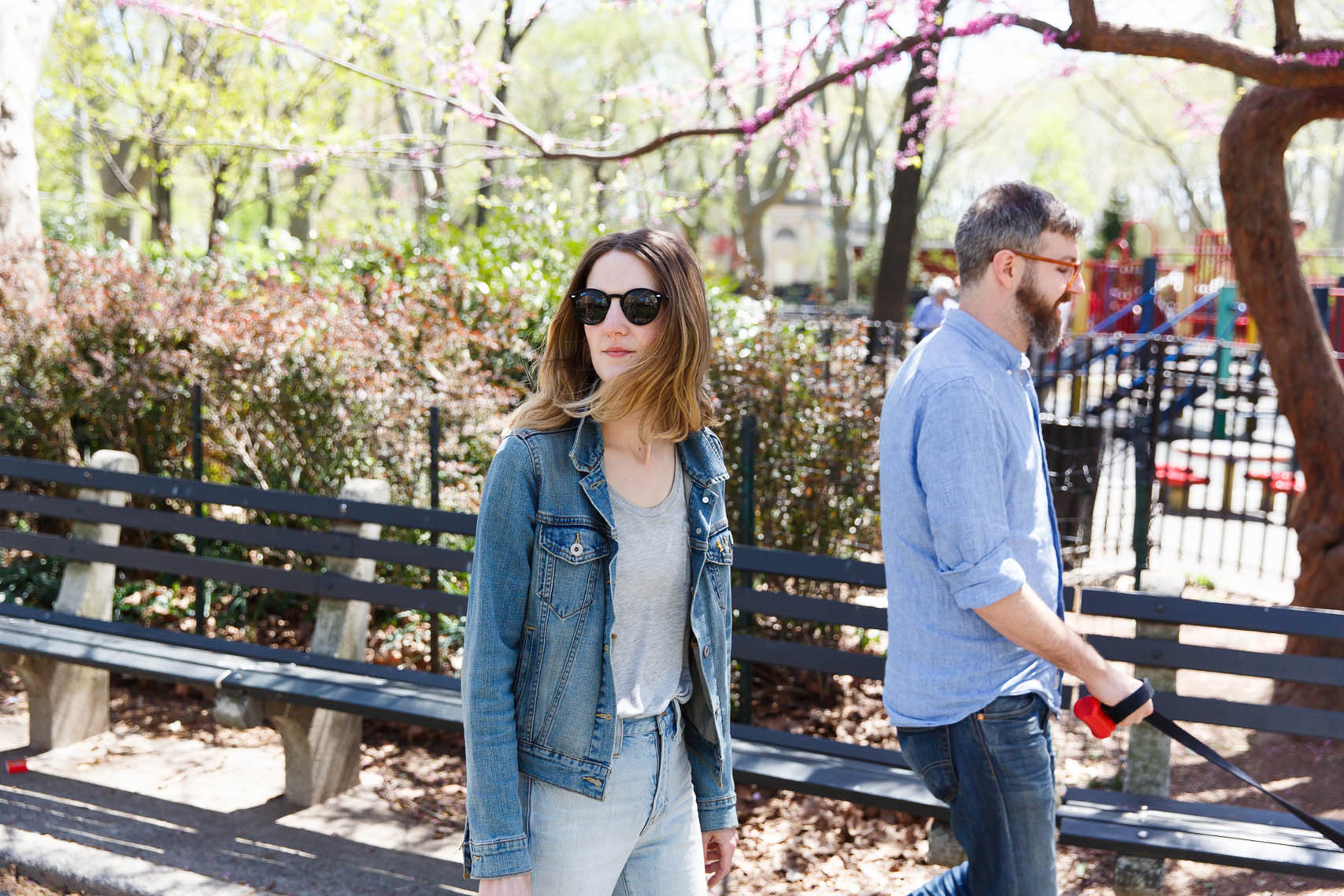 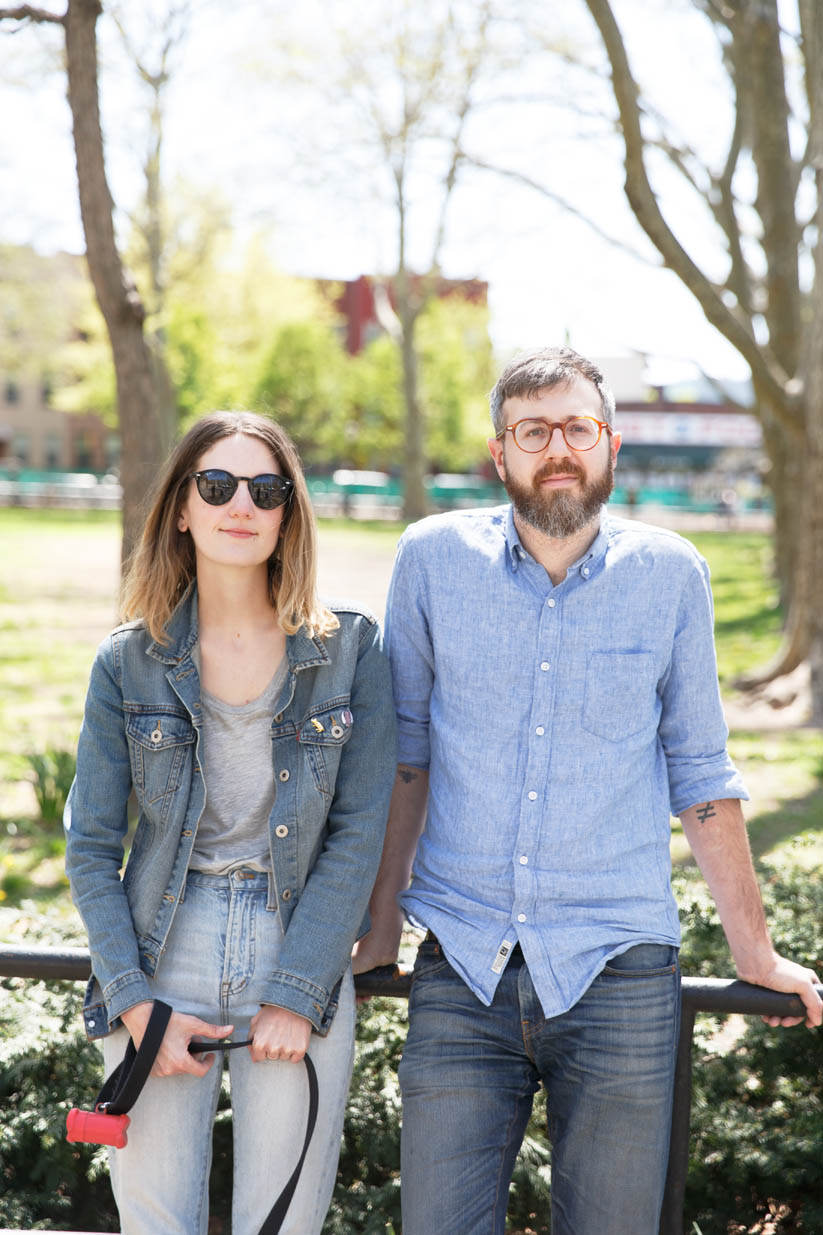 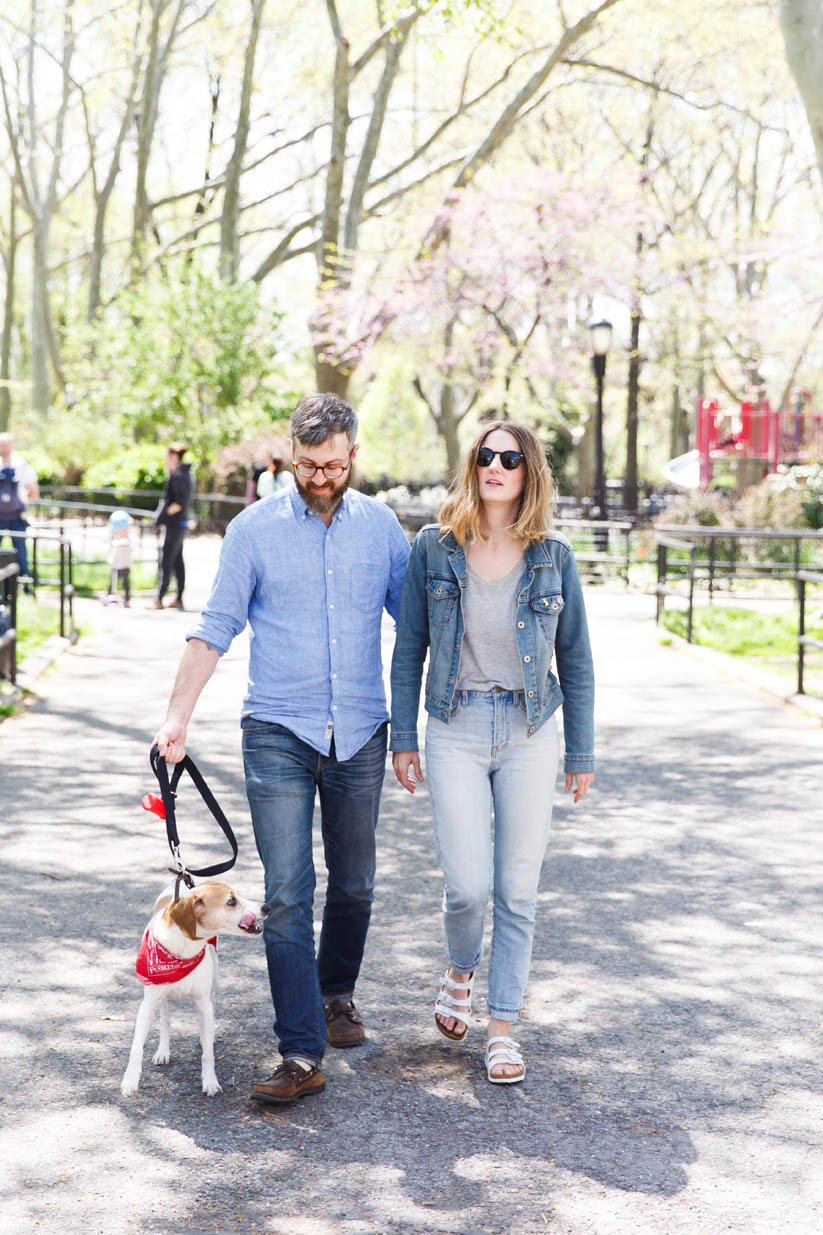