Interviewed at their home in the West Village, Michael Yuasa is the founder of a men's underwear brand, YUASA, and digital strategy agency, Antarctic. James Nemastil is a designer by trade and is currently with Tory Burch. 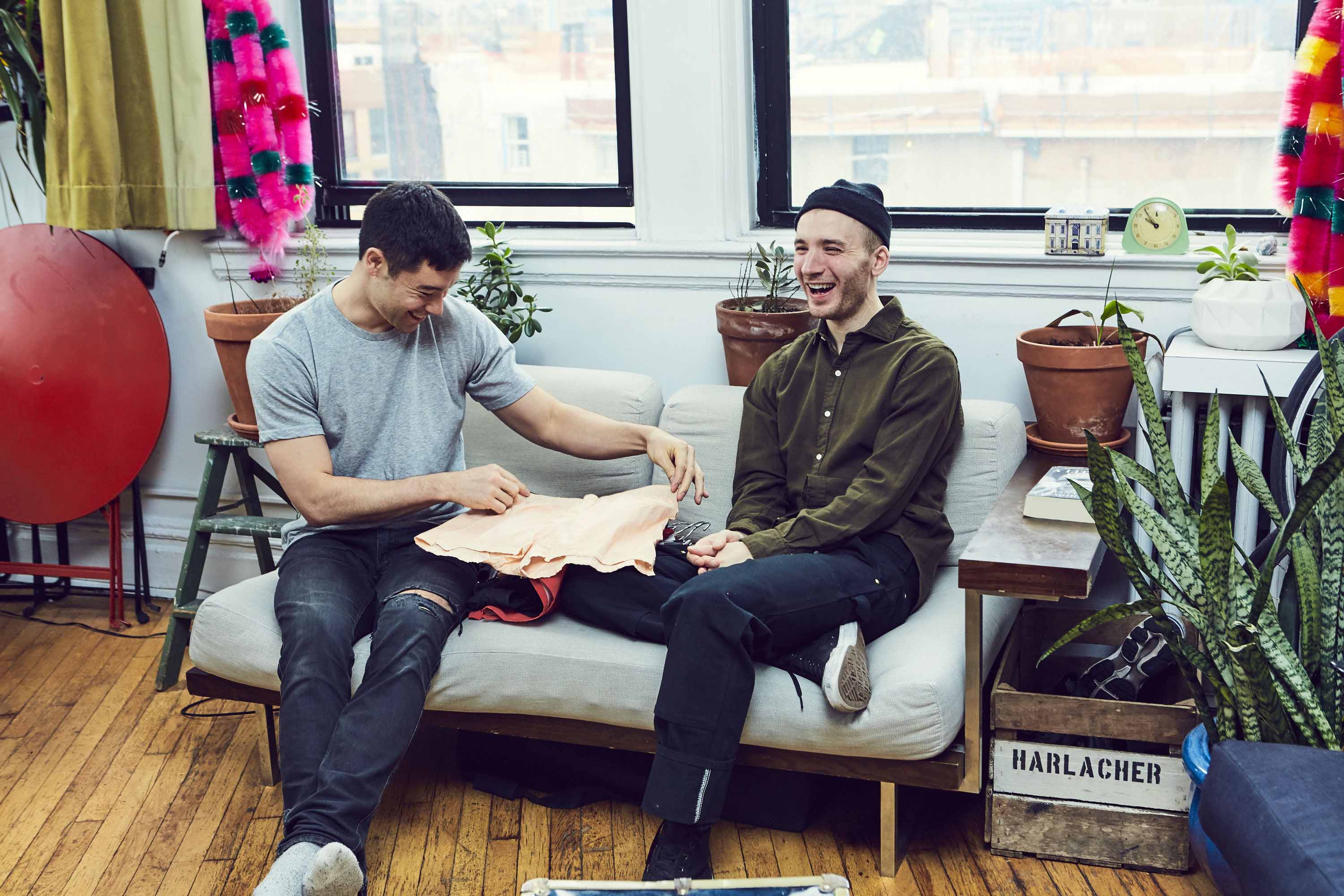 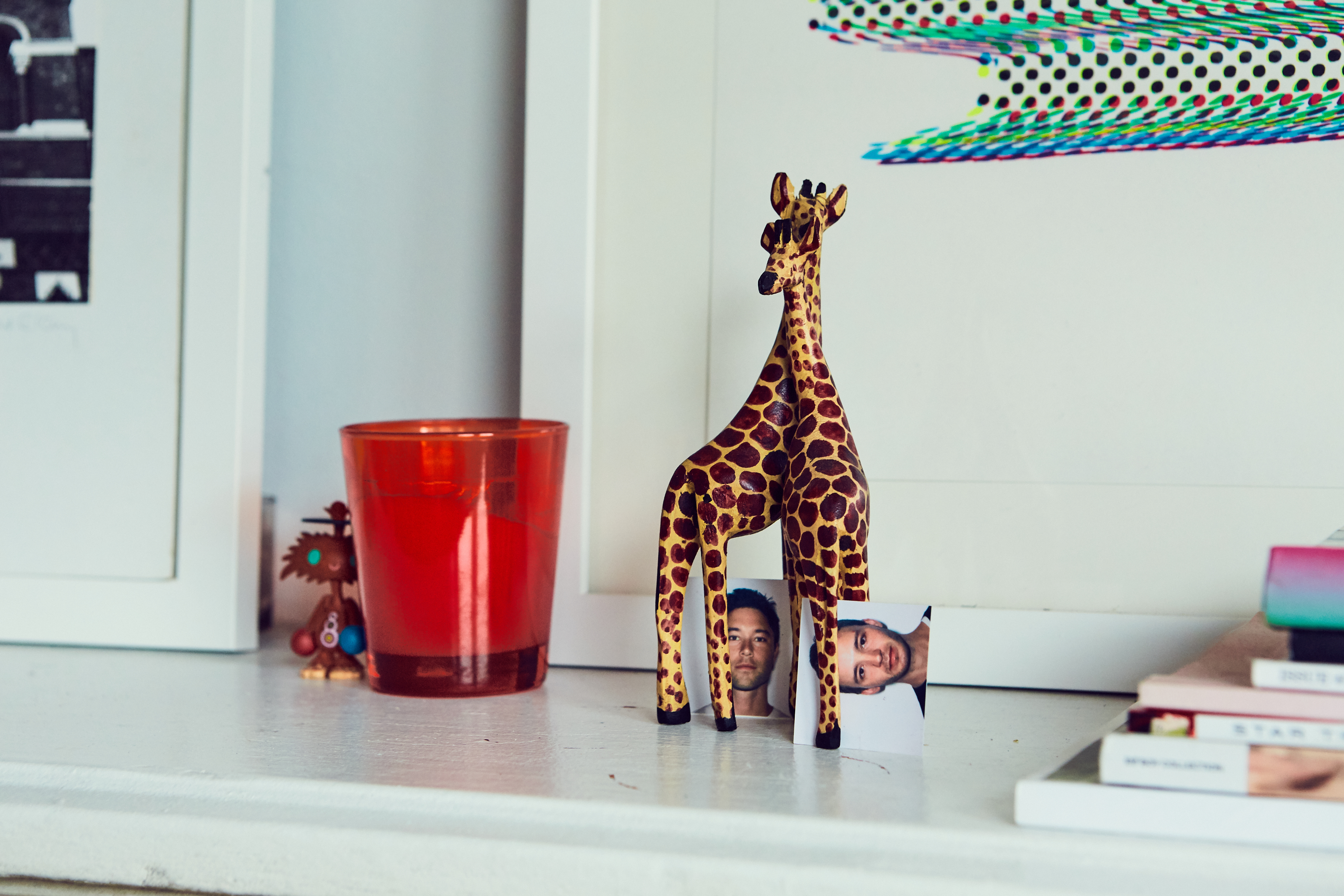 JAMES: Michael will say we met on Twitter, which I do remember that interaction and I found it really bizarre that someone was approaching me on an app that wasn't made for messaging back and forth. I remember being like, "Can we take this into text messages? This is probably easier." He's like, "Oh, no, no. Twitter's easier for me." I was like, "Who the fuck is this guy? What is his deal? You're making it really difficult." I think we physically met outside of a bar. I went to college with one of Michael's exes, so I actually knew of Michael for a long time. Then we just started talking.

MICHAEL: James was dating somebody at the time.

JAMES: Yeah, I was dating someone, and dating is, by definition, so different for every different relationship. I've dated people in between dating Michael, and Michael's done the same thing. I guess the solidification of the relationship was when we moved in here two years ago.

TWP: How did that happen?

MICHAEL: I was living in an apartment in the Lower East Side with Derek, my best friend, and our other friend Shawn. It was a three bedroom apartment with no living room, it just had a big, long hallway and a small little kitchen. I was like, "Fuck this, I can't live like this anymore. This isn't happening."

JAMES: Looking back it was really bad. I was living in Chinatown with my sister in a two-bedroom. She was not his number one cheerleader because Michael didn't have an address of his own and because he was needing a lot of places to stay, I think she was surprised.

MICHAEL: I had the flu one day and I stayed home the whole day and she was there.

TWP: Is that when you started apartment hunting together?

JAMES: No, actually ... Well we did start apartment-hunting and everything we were looking at was the typical railroad apartment and so expensive. Then we started dog watching for our friends, Michael was like, "Hey, James, I'm going over to Johnny and Jasper's and I'm going to watch their dogs. You should come stay a few nights." Then it's like we were staying here with the dogs, which was kind of cute the layout was pretty nice. Then they called us or texted us, and they're like, "Hey, actually, we're not coming back and we're staying in L.A. Do you want to take the apartment?" 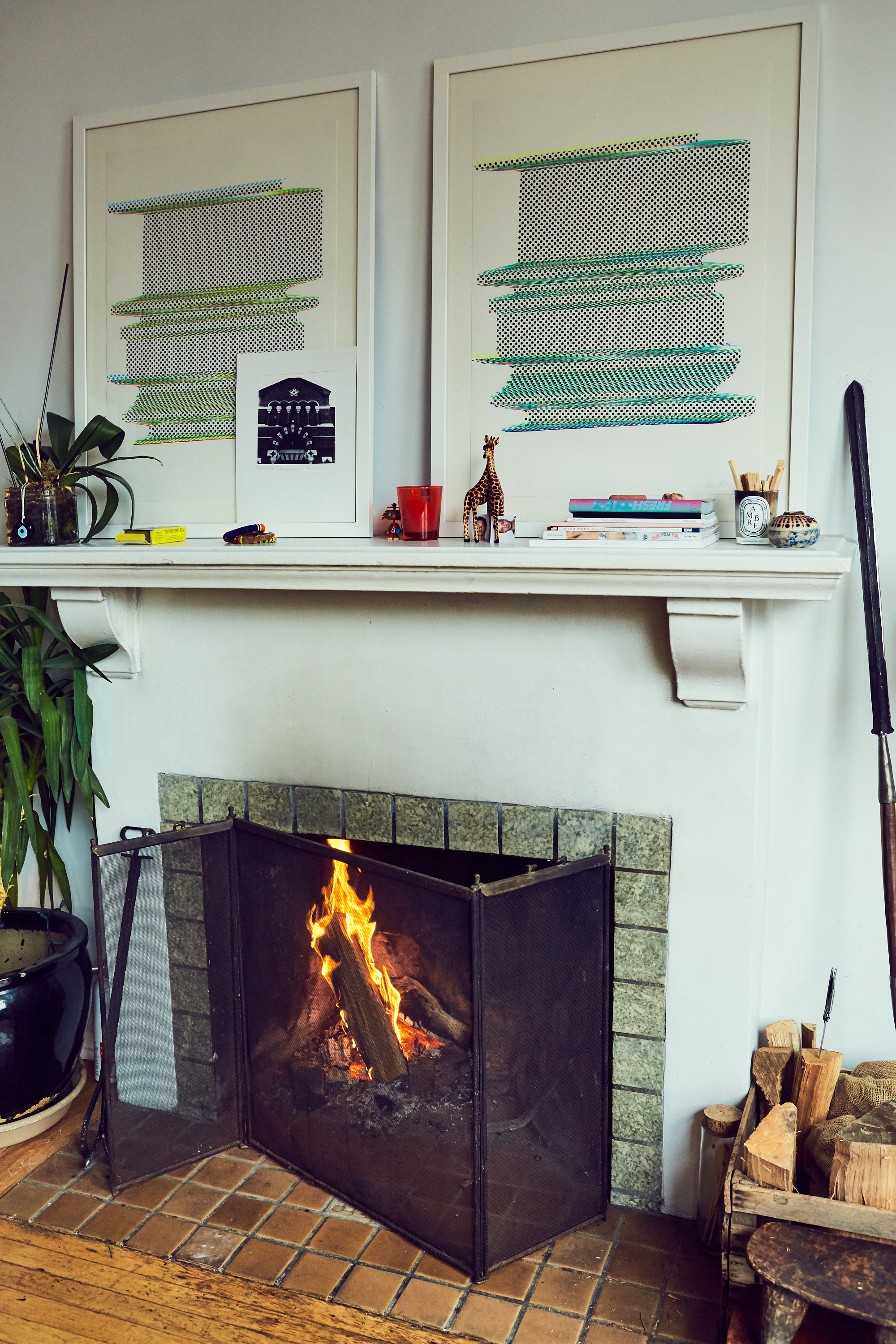 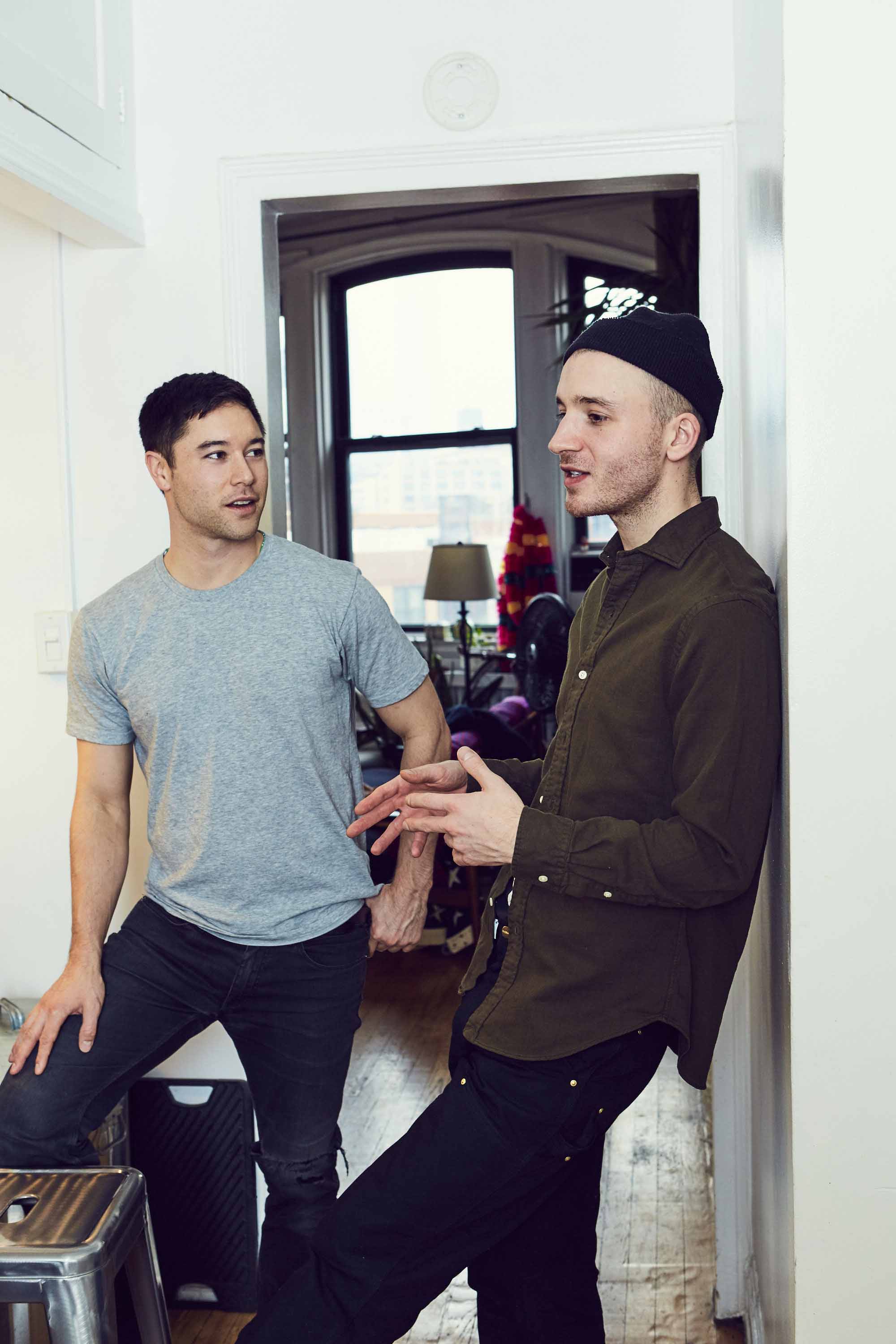 JAMES: I went to Parsons and I moved here from Ohio and in college I was not less focused on what was happening in school, but I was equally as focused on meeting people outside of school and being at companies for the same amount of time as I was in class. I was interning a lot and trying to meet as many people at different companies as I could. One company I was at, Derek Lam, contacted me after college to do a collection with him.

JAMES: I was actually working at the Standard Grill at the time, on my second day of training as a bus boy. I was in the locker room, I remember I was changing and there were three shifts you had to do for training, I was getting ready to do my second one like, Okay, I just got this email from Derek and I remember texting Michael asking him, "What I do?" He's like, "Get out of there! What are you thinking? Leave." I left and started on that project for six or nine months. Then after that project I started at Tory Burch and I've been there now for four years. I'm only reminded of that because LinkedIn is now sending me "Happy Anniversary" messages. 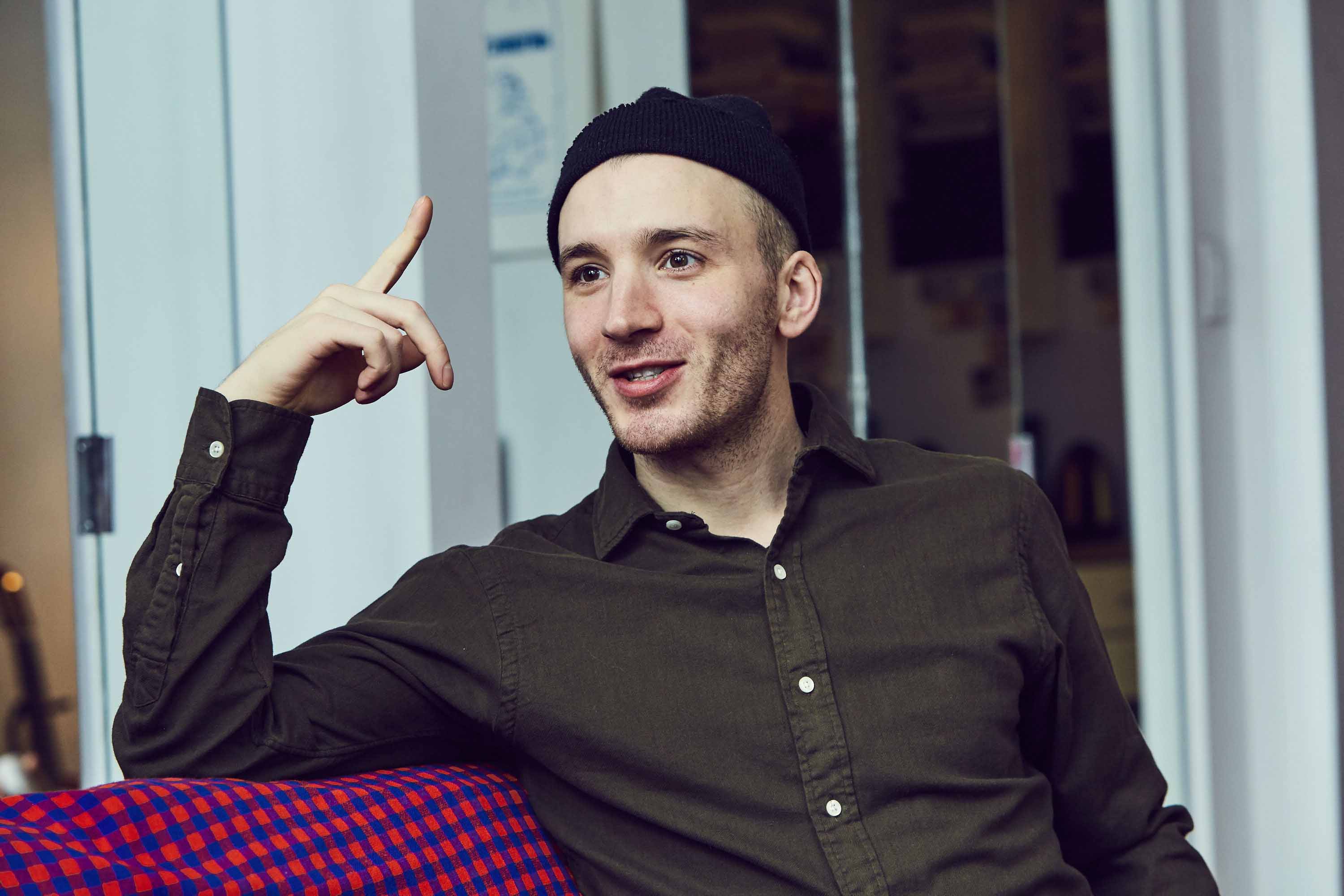 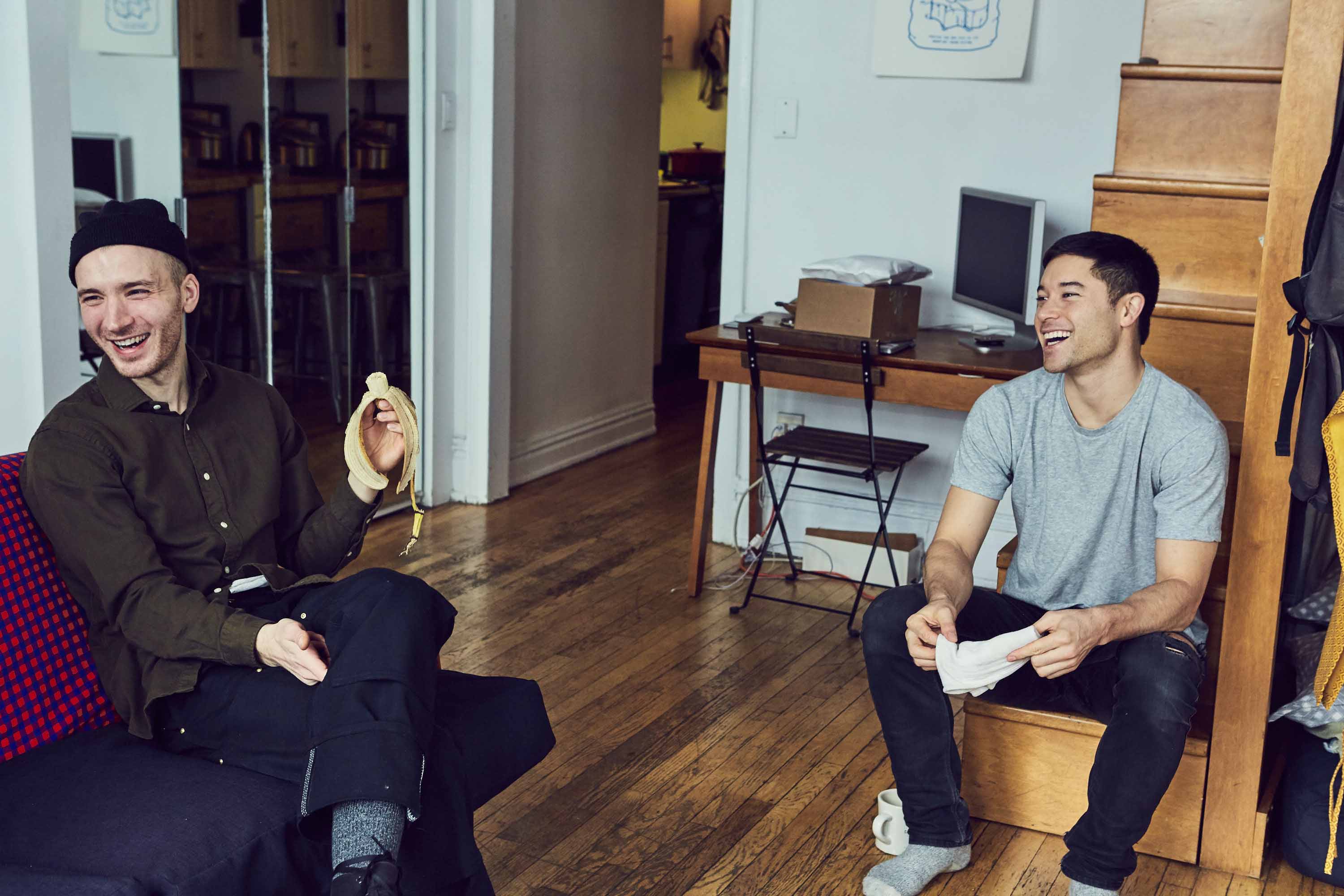 MICHAEL: I have a menswear line, called YUASA Underwear. I have all these styles of boxers. I feel like I'm not appropriately dressed to be selling underwear right now... I started the line right when I moved to New York in 2010 but I got the product late 2012. It's all men's underwear, a single style of short-cut boxers. I didn't fully understand the market and so I just did one product in seven colors. It's one short-cut boxers in seven colors, but they're perfect. Now that I understand how it all works we're doing a bunch of other styles. I feel like I can put the peddle down on the advertising and the marketing and the sales will go up, because I have a market identified, which is all gay men. I've got my Fire Island crew, I got the gay man underwear profile.

JAMES: I think Michael's discovered that you can really position any product to any one at any time. That's kind of an interesting part of the retail industry and fashion. You can find a market for anything if it's packaged the right way or if it's delivered in the right tone. I think there's a lot of possibility to be creative and have fun. You can decide to do it and just the action of doing it can lead to so many funny, weird, interesting, places and people. 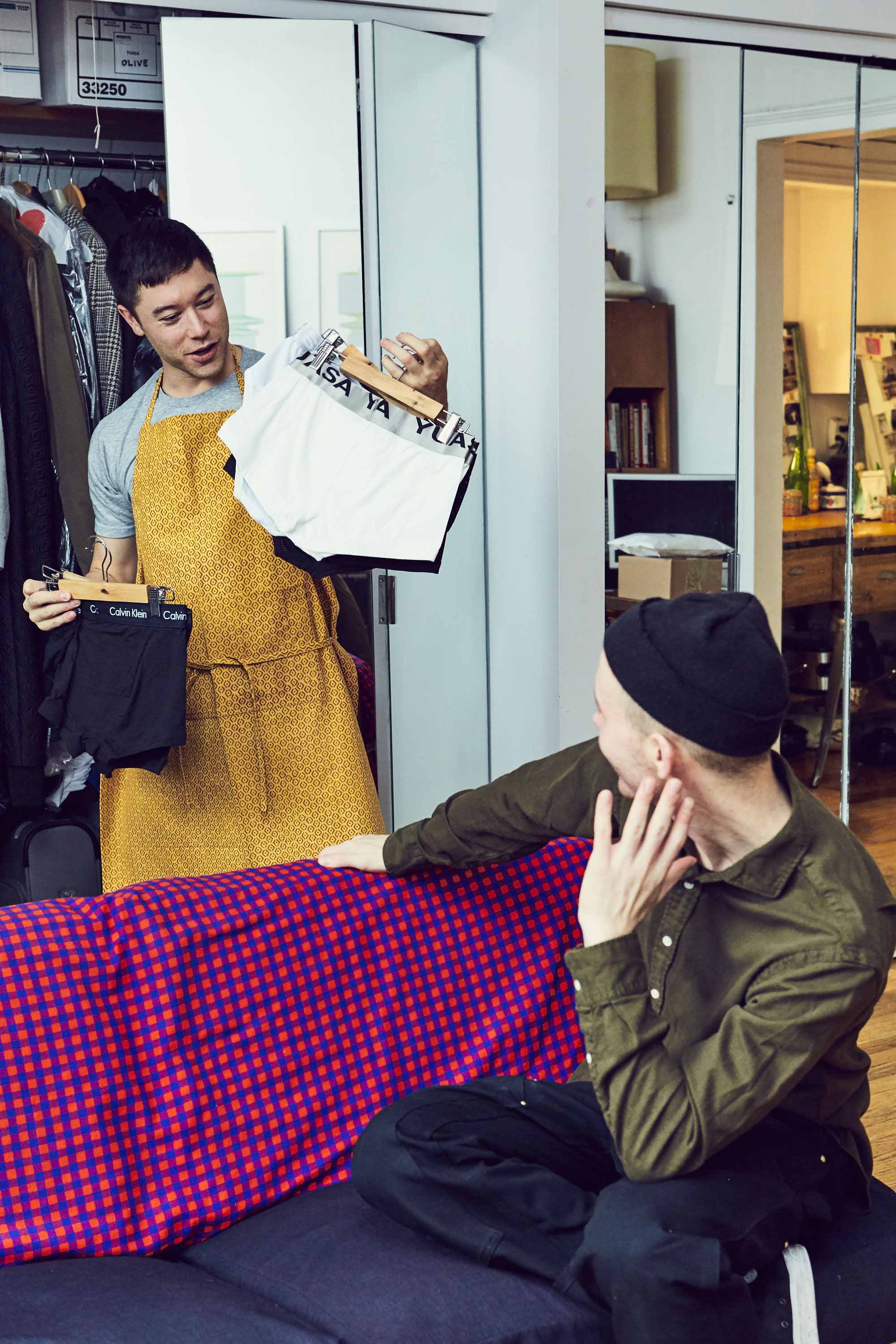 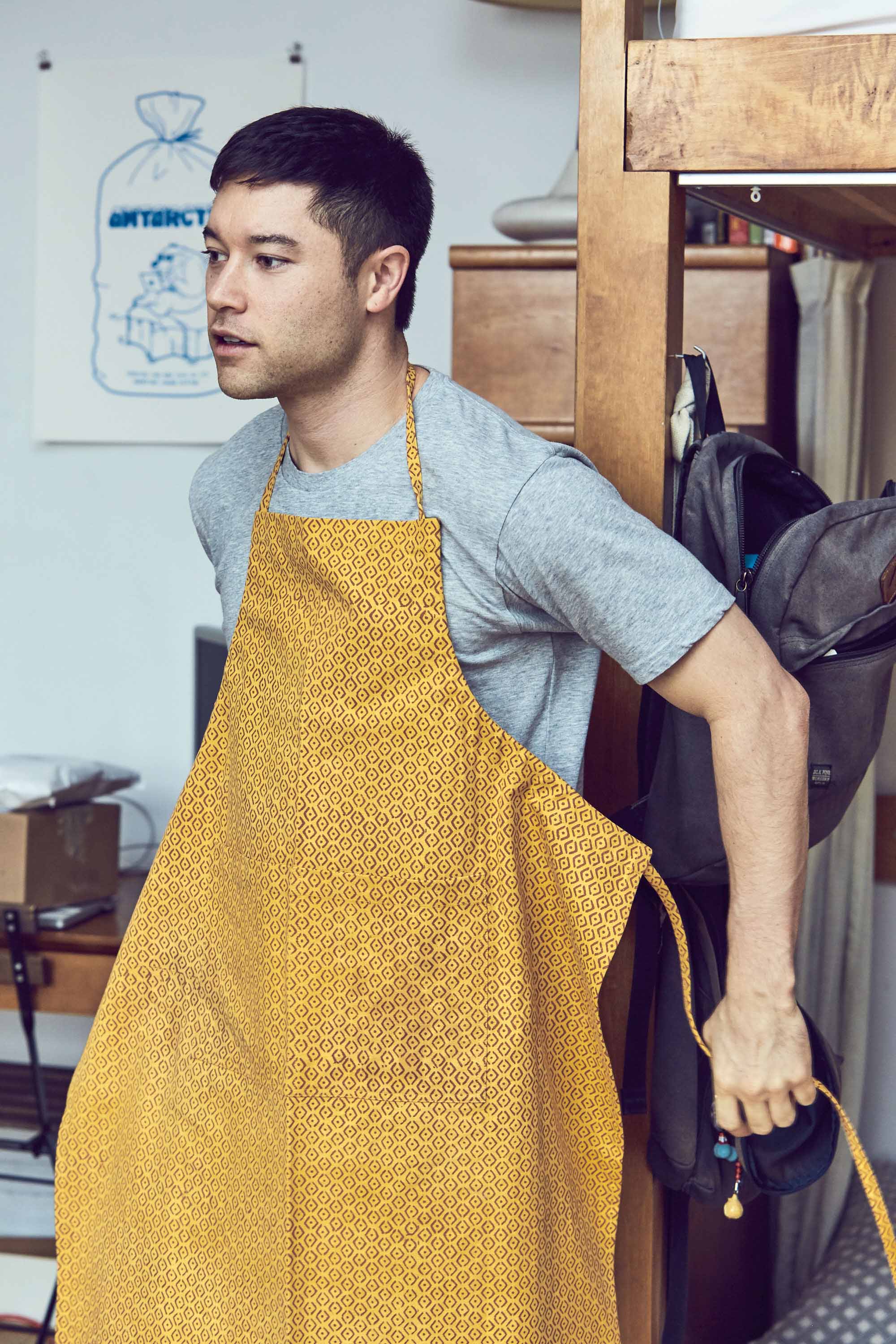 TWP: What is it like running YUASA and Antarctic?

MICHAEL: They are two totally separate businesses. Antarctic is all people. People are the product the company makes, right? You have your developers and your strategists and your designers and your project managers, there's not a physical product. The product's what's made from those people so it's a lot of hands-on management. Whereas the underwear line, the clothing line, is a product and it sells itself a little. I don't have to worry as much about what everyone's thinking or managing people. I like advertising and marketing so in general that's why I think both work, but they're two totally separate things so I have to change my thinking. One's a product that's supposed to be fun and shiny and it's exciting and you can talk to people about it, but then all the Antarctic stuff's really business-to-business which is inherently more serious. It's more buttoned up. 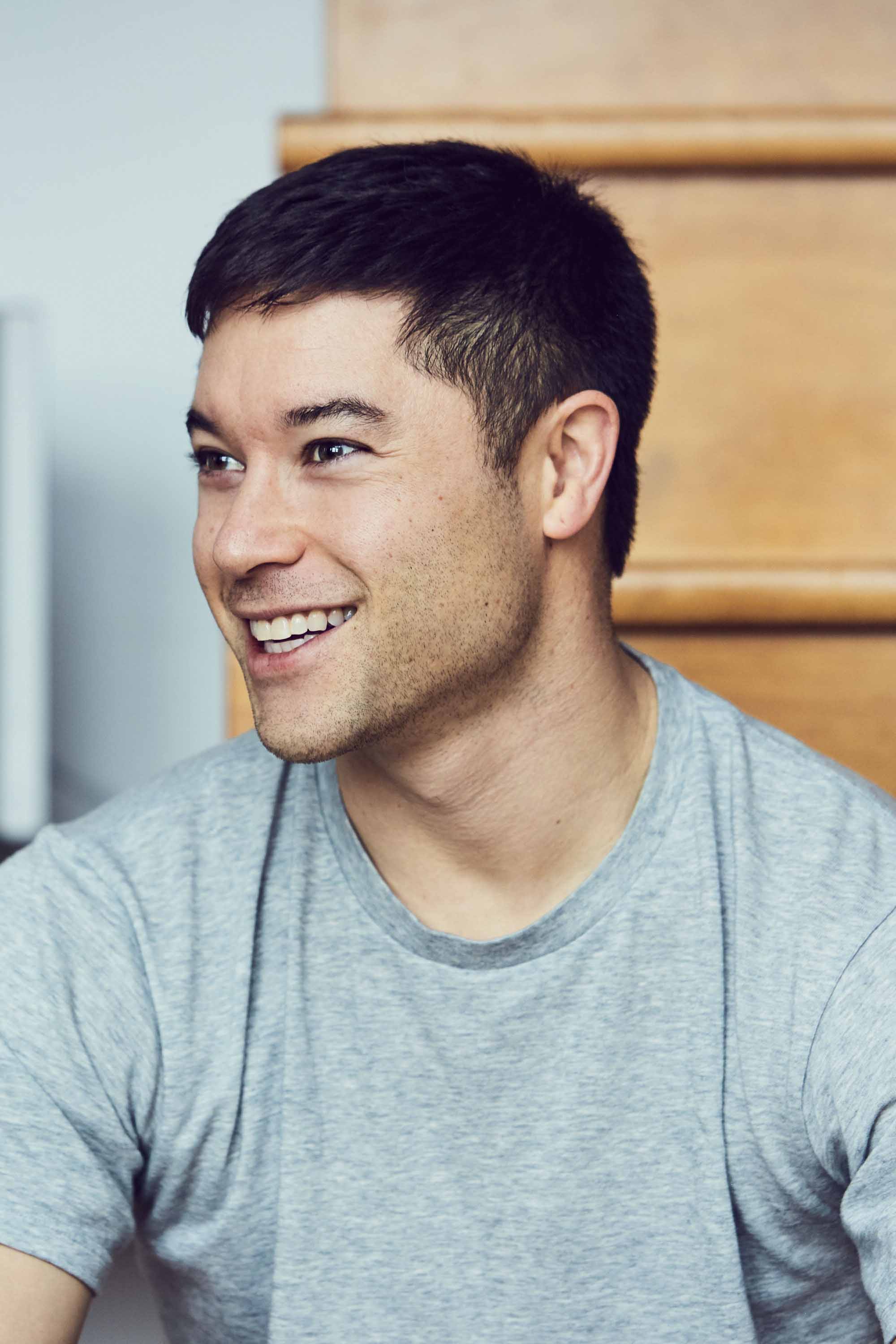 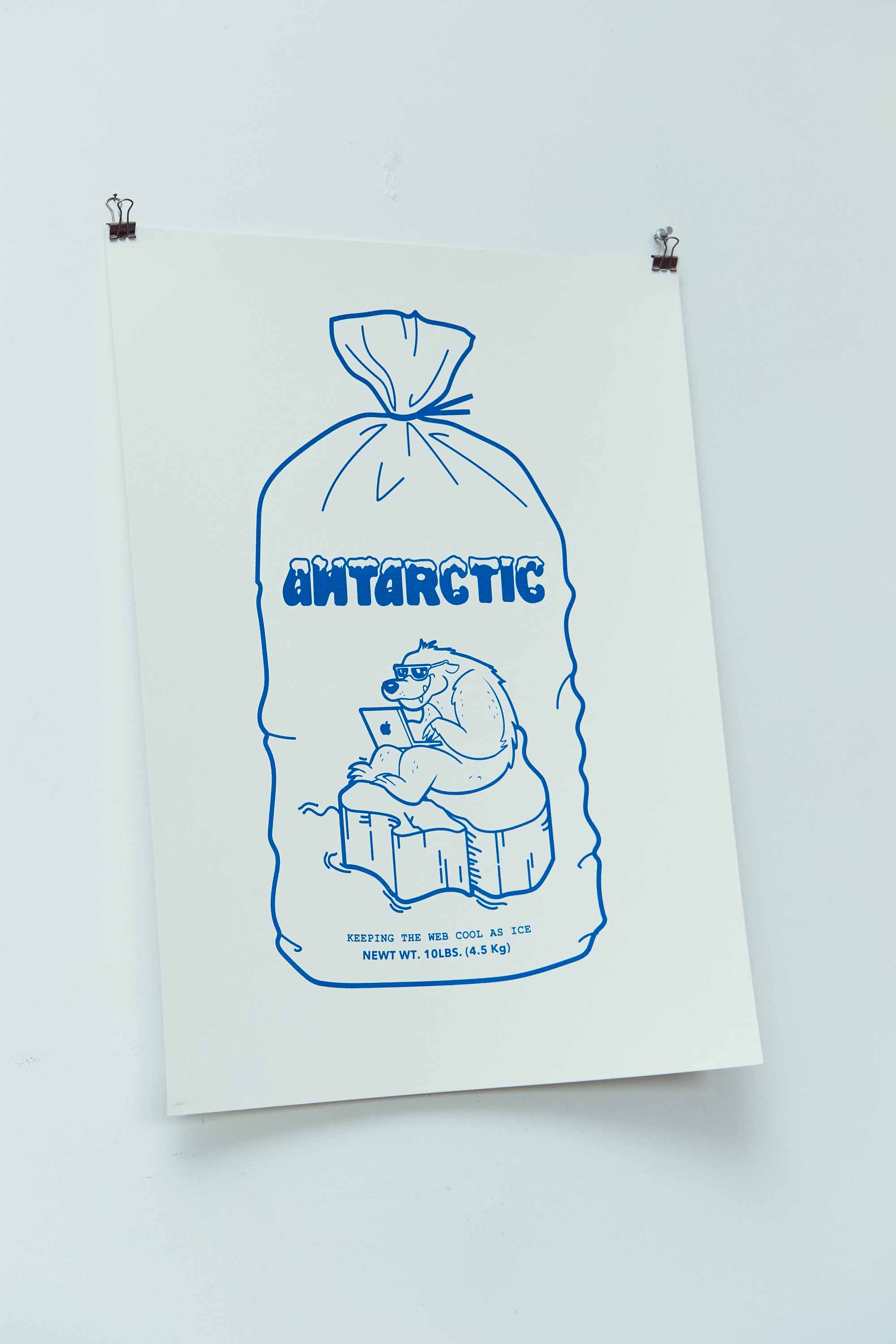 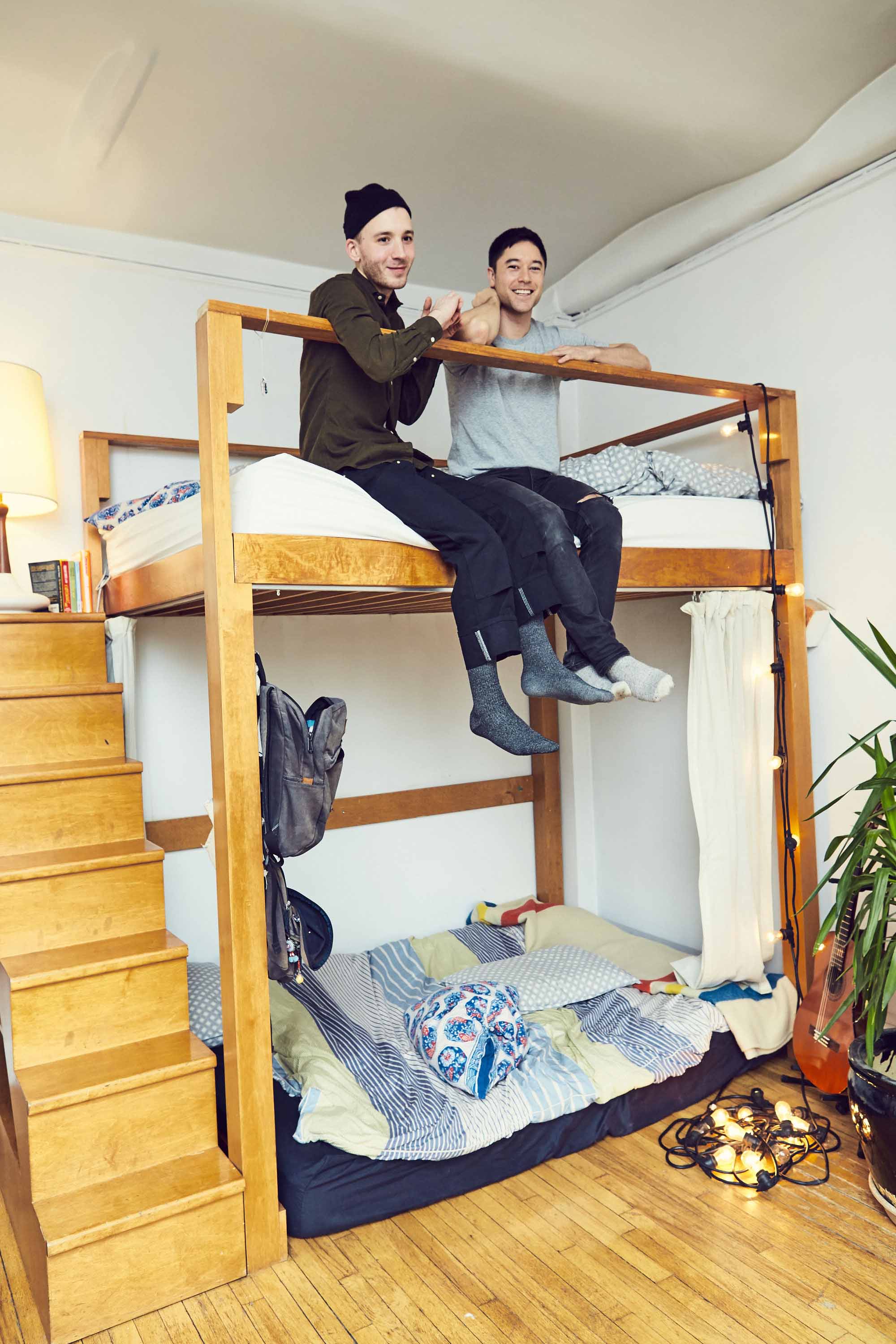 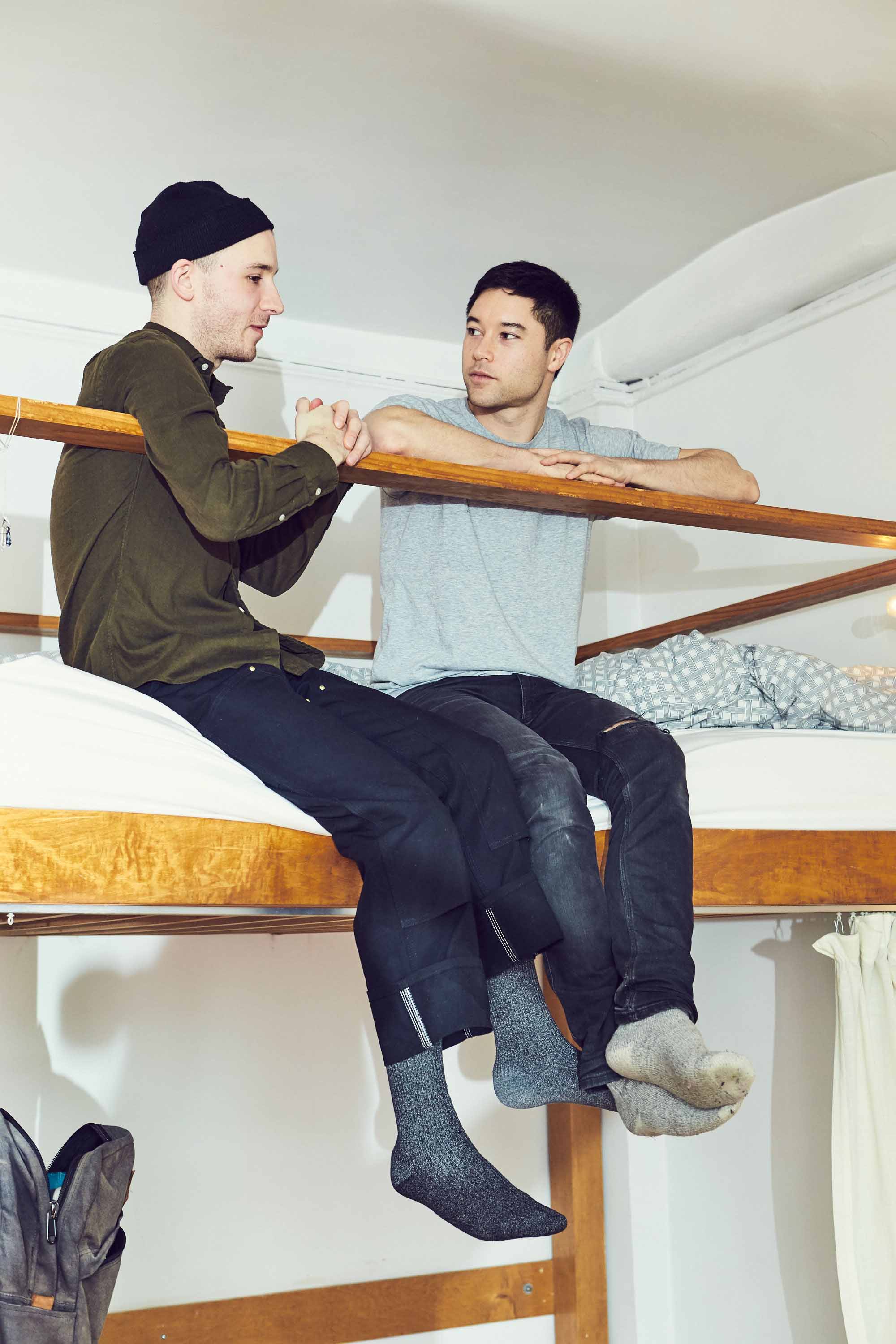 TWP: What is an average day for you guys?

MICHAEL: I wake up first six out of seven days and then I tend to kiss James' face and try and get him up for the next 30 minutes. Sometimes it works, sometimes it doesn't and then he gets upset with me. Then I'll bring a coffee to him. Then I guess James goes to work because I'm working at home right now. Then I just do a bunch of stuff all day. I usually prep dinner every night.

JAMES: We have a Hansel and Gretel thing happening where I'll come home and I can see exactly what Michael's done because there's underwear, there's a P.O., there's like some remnants of a new business starting, there's diner going...

TWP: What have you learned from being with each other?

MICHAEL: I'll counter that with Fashion Week, when James taps out for two weeks and comes home at midnight or 1:00 in the morning and leaves at 6:00 a.m. it's not perfect, it’s the reality.

JAMES: And it's a different job when you walk into the door you have to switch gears.

Wanting to be in a relationship means having support for each other. 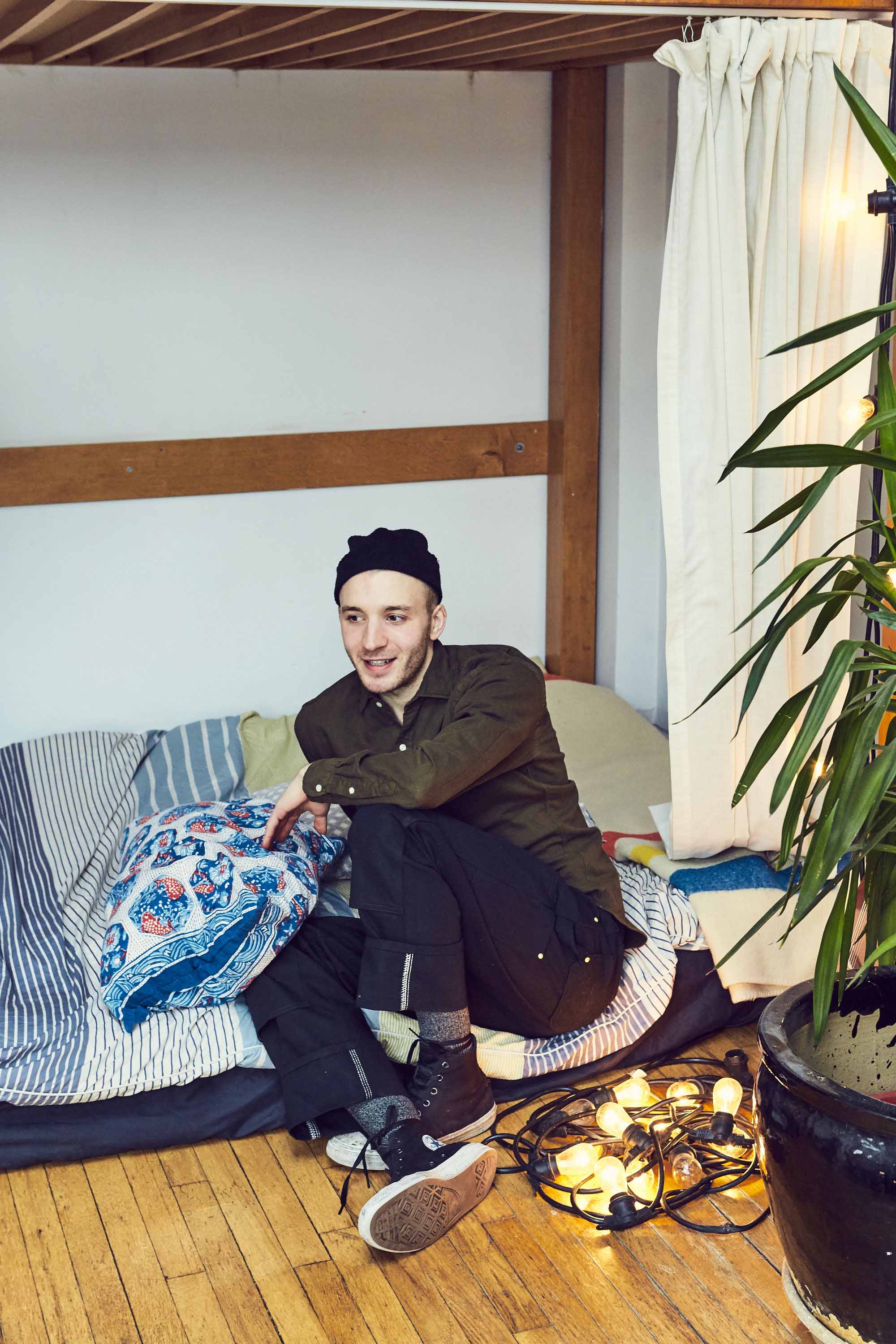 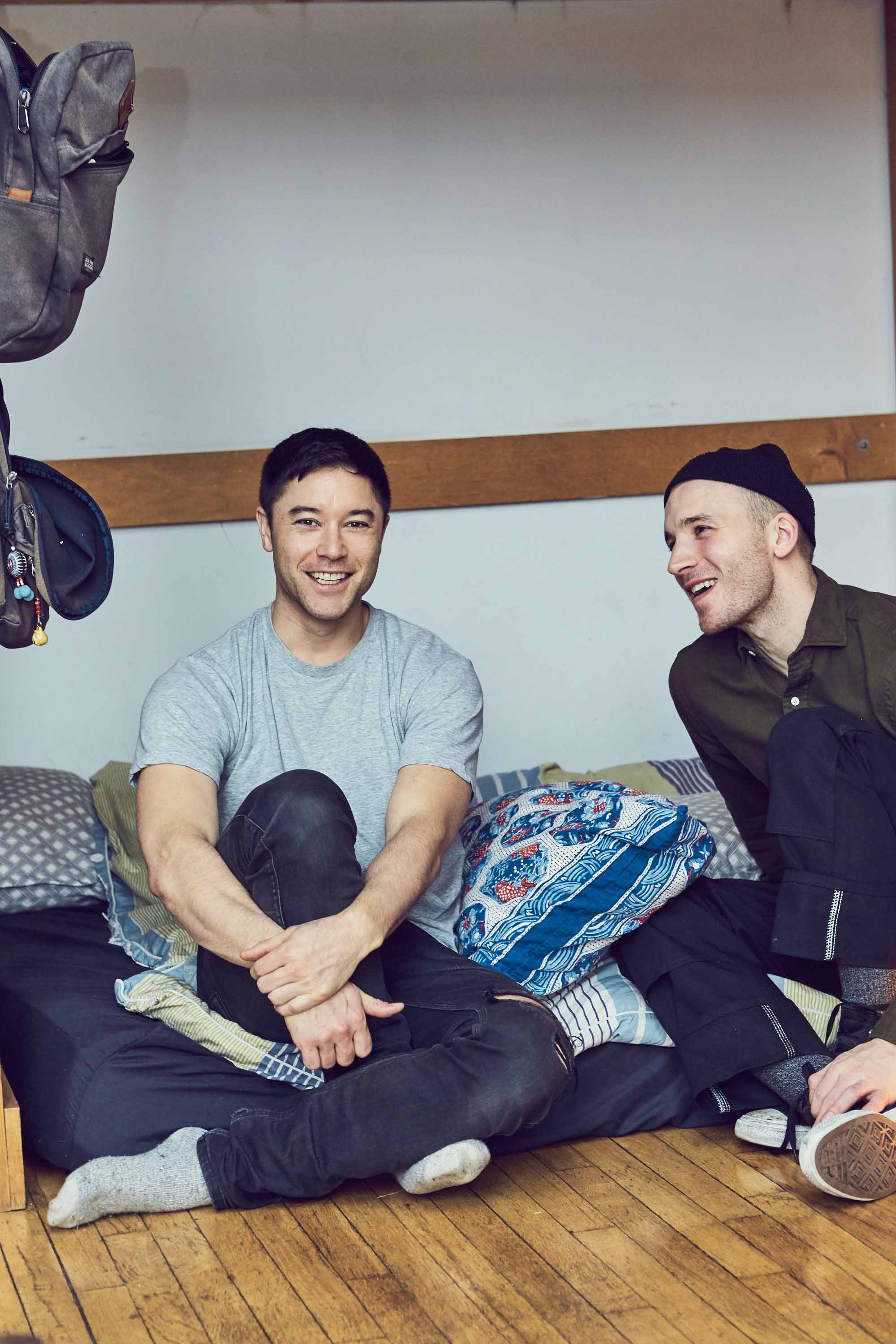 MICHAEL: I love how imaginative James is. There's this long narration or whole world going on in his head that he creates.

JAMES: Not the fish. It was a comic strip illustrated by Winsor McKay from 1905 to 1911 in the New York Herald. It was about a boy who would fall asleep. Each page was him falling asleep and at the very end him waking up and so each week there was a new story continued about his dreams. 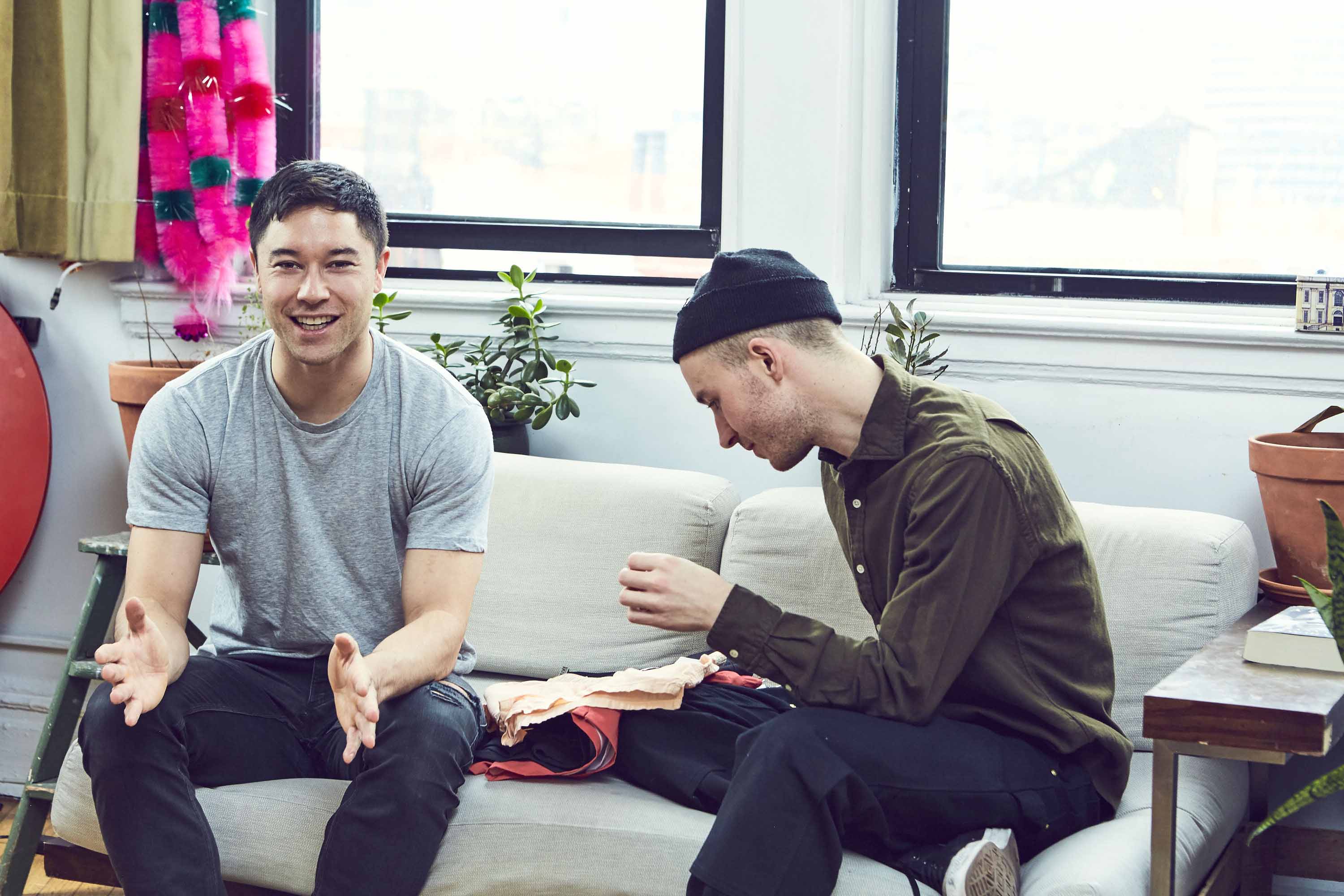 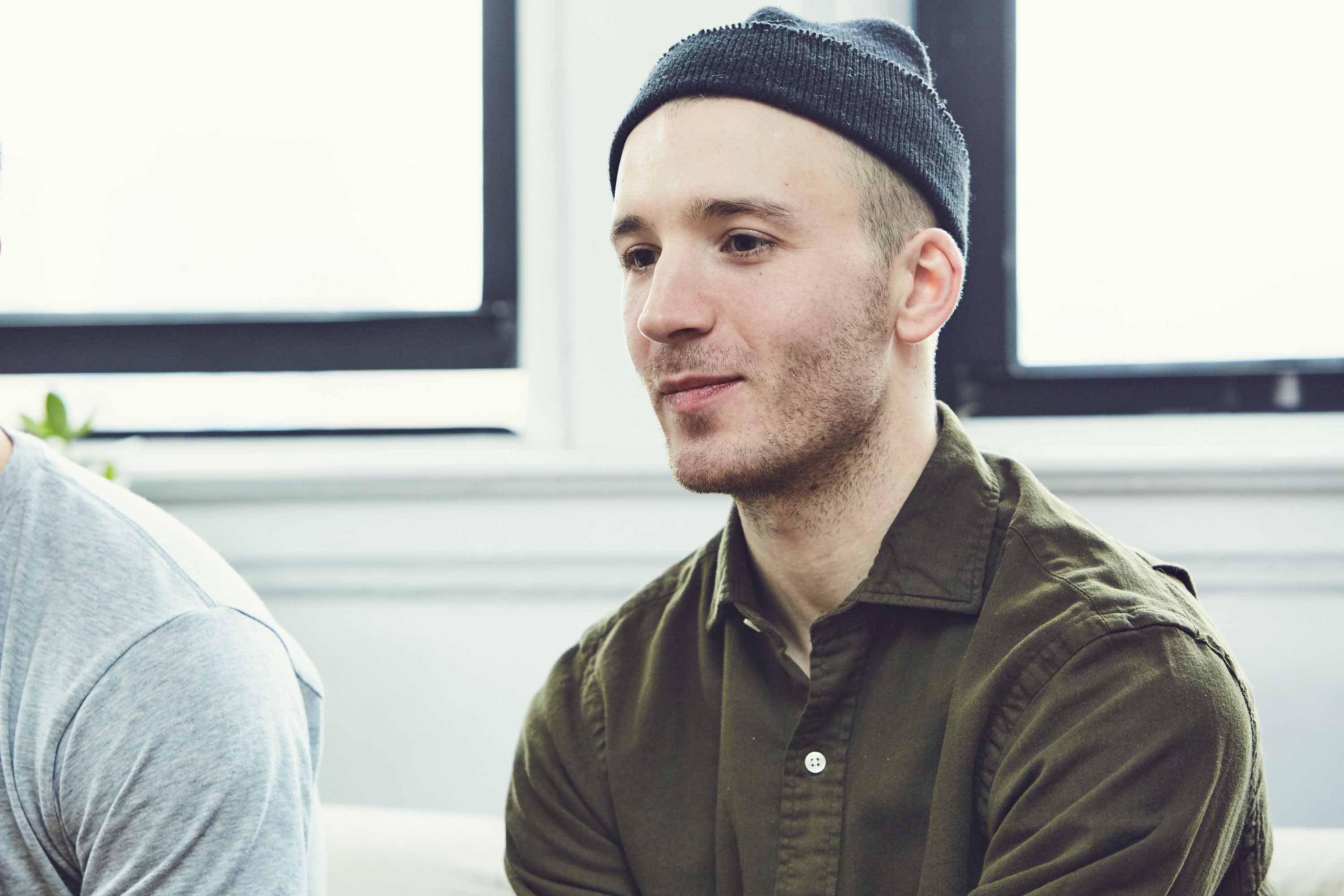 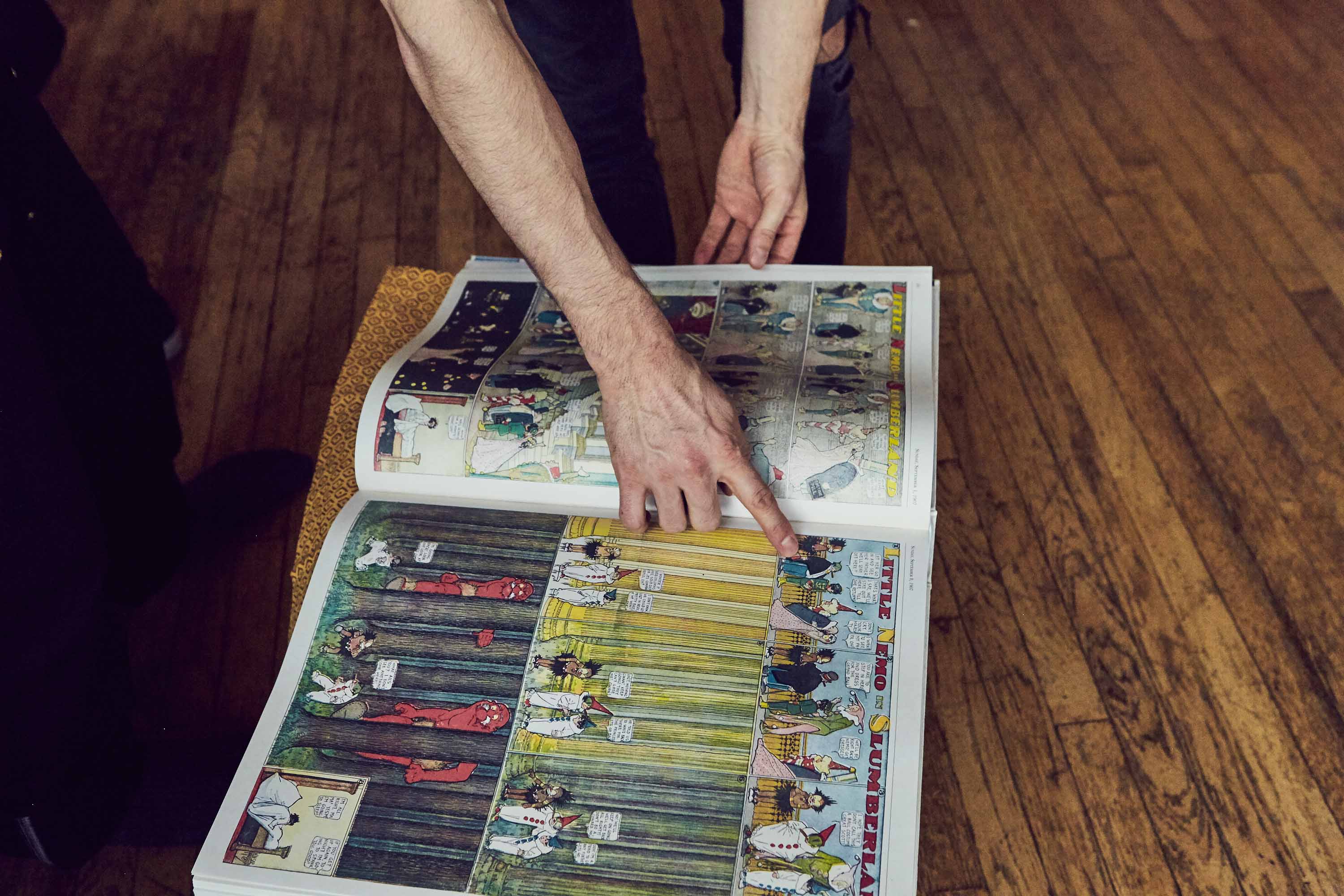 JAMES: My favorite thing about Michael is his unstoppable amount of energy to do. If he wants to do something he's not going to wait for anything, he'll begin to pursue it immediately which I think is really inspiring because I'm a little more shy. Michael has a ton of ideas. I think we get a lot of exciting things done whether it's my idea and Michael executes or his idea and he runs with it.

TWP: Do you two ever fight?

JAMES: We've learned to drop certain things and pick it up in a couple days. I think once you see situations happen a few times over you're like, "Okay, I'm not going to ask him to clean up all of his shoes all over the floor." You need to give each other a moment to think to get something resolved. Sometimes you need space. 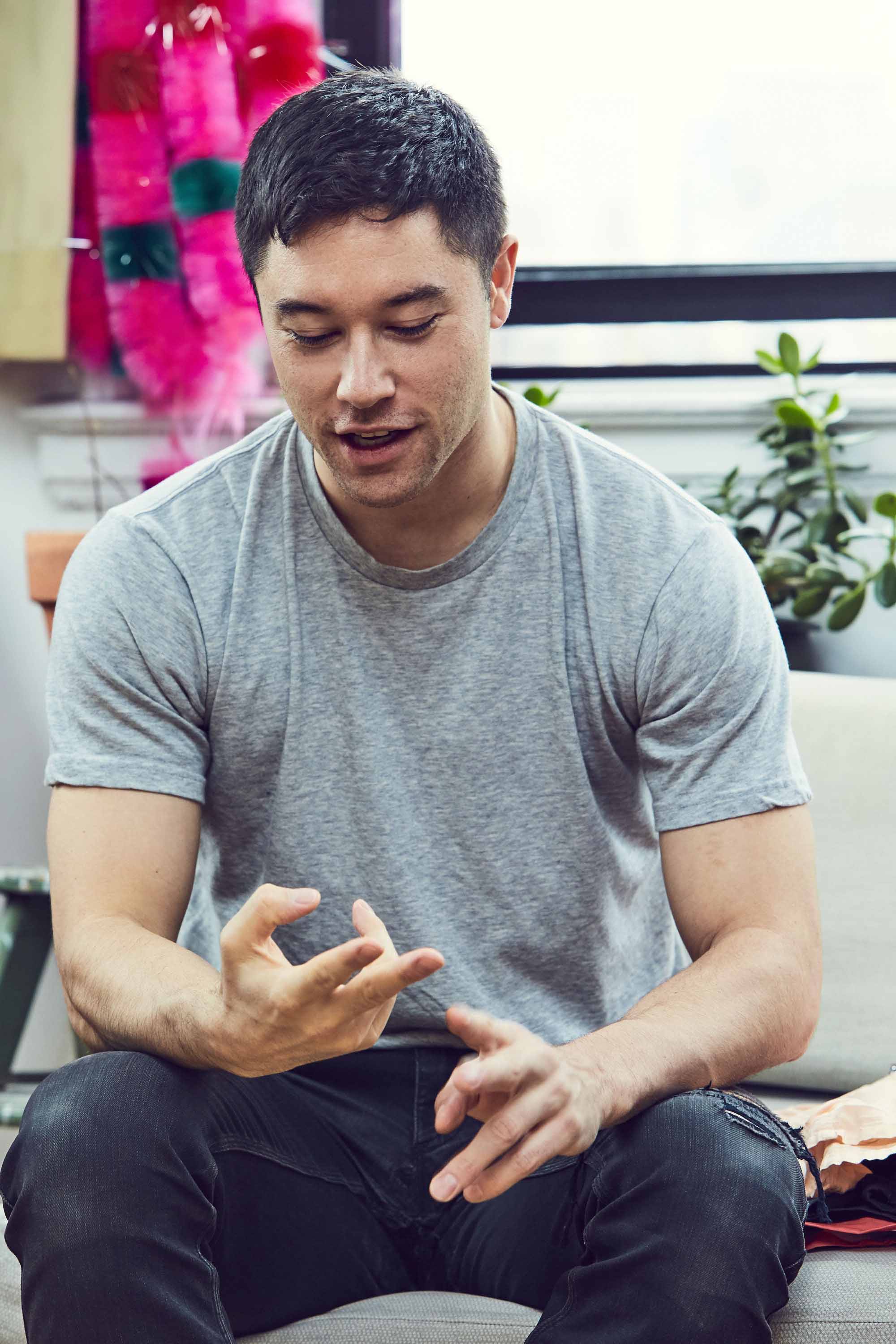 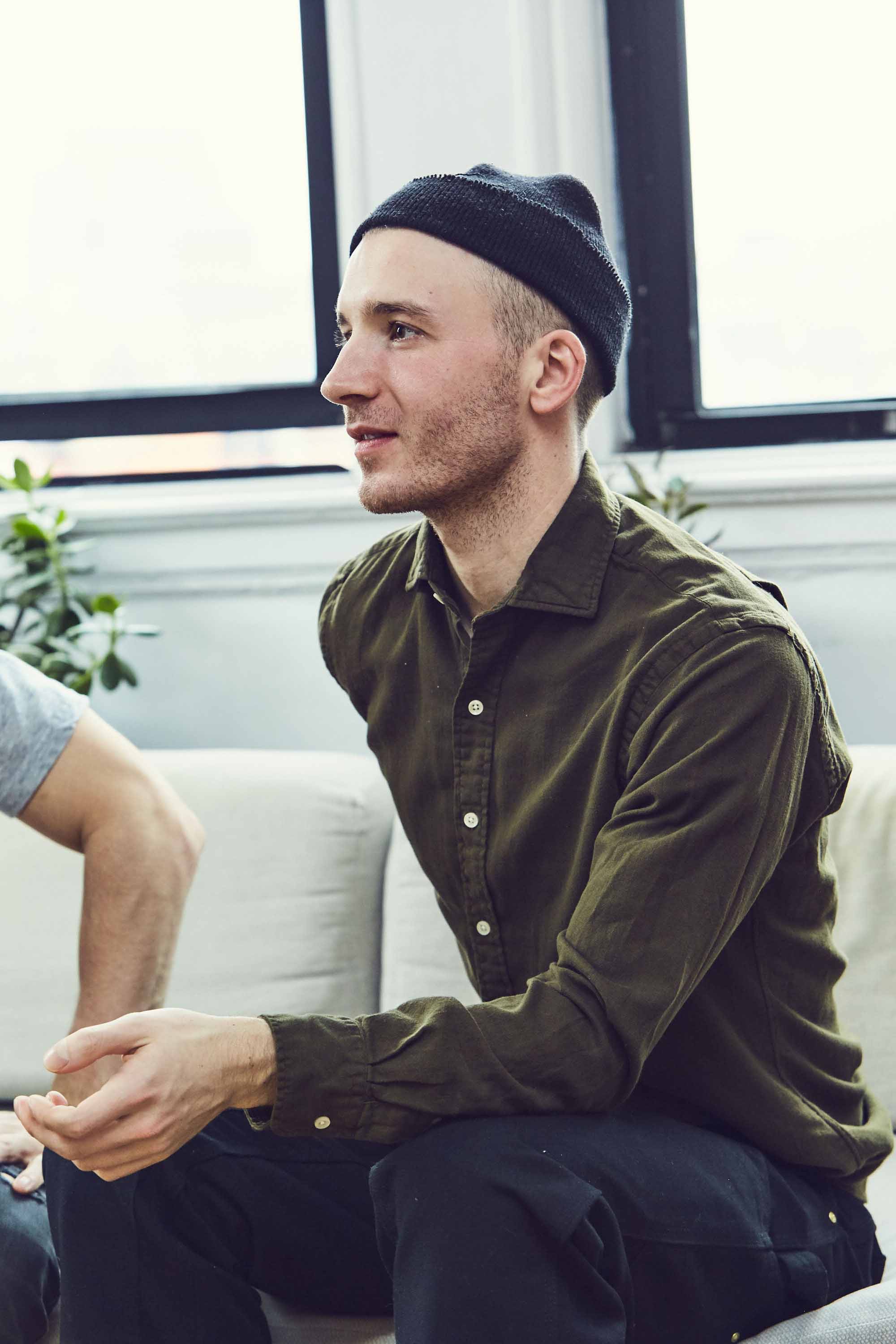 Dating, in New York, is crazy.

MICHAEL: Is everyone single? No, but I think it's a little more loose. It seems like most of the relationships are partially open to some degree. It's not a total deal breaker if something happens, you know what I mean?

JAMES: I think gay people are defining their relationships by their own rules and not following how heterosexual couples have defined theirs for so long. Gay people are like just doing it- 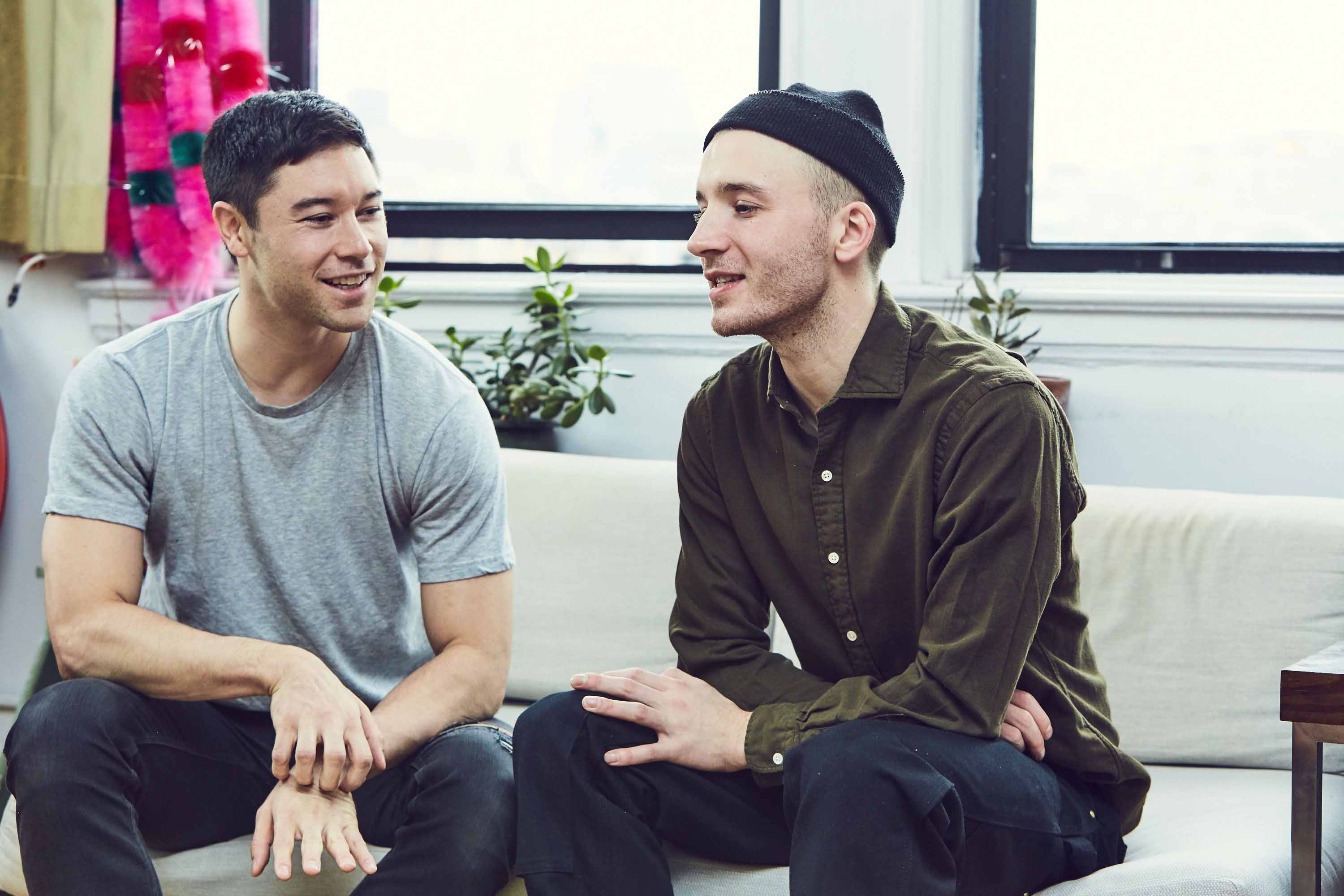 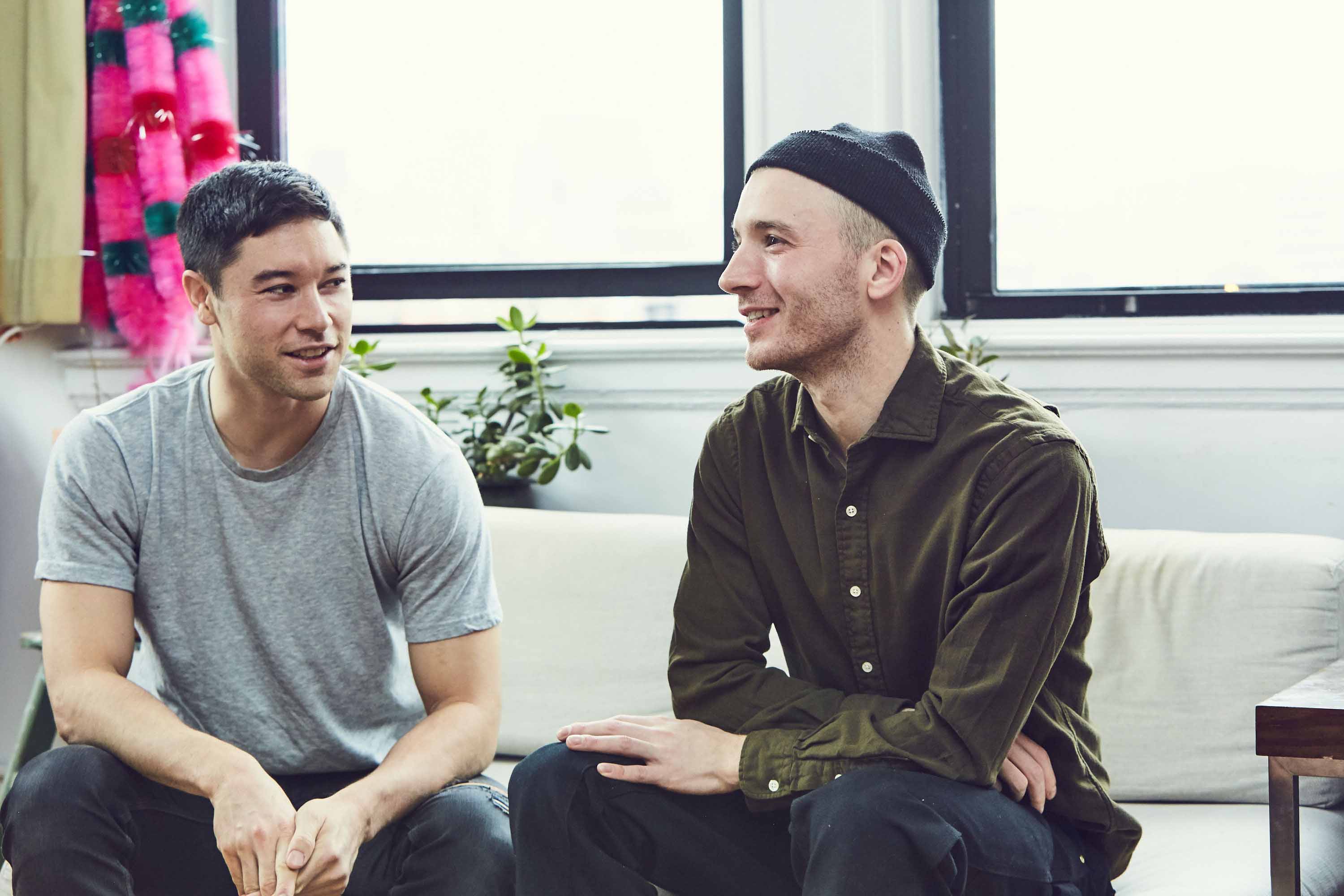 MICHAEL: We don't give any thought to bad things or get too stressed about the future. I'm really excited about our spice collection so if I did have a thought it would be like, "How would we ever divvy up the spices?"

JAMES: We don't really have any big ominous things that we need to talk about with each other. If bad things happen we’ll get there when we get there. I try not to cloud my thoughts with worry about those kinds of things.

MICHAEL: Eventually I'd like to buy this apartment and get a place Upstate and then mortgage it and use the money to grow the businesses. I'm excited about the future and seeing James create more. James is at Tory, and which is great, he loves it, you know, but I like seeing his own creative work. That's what I am really am looking forward to. I want to see more of James' creative, always, I love it.

I'm excited about the future and seeing James create more.