Interviewed at their studio and home in Brooklyn, Adam Frezza & Terri Chiao are known as CHIAOZZA (pronounced like "yowza") a collaborative duo whose work explores play and craft across a range of media. 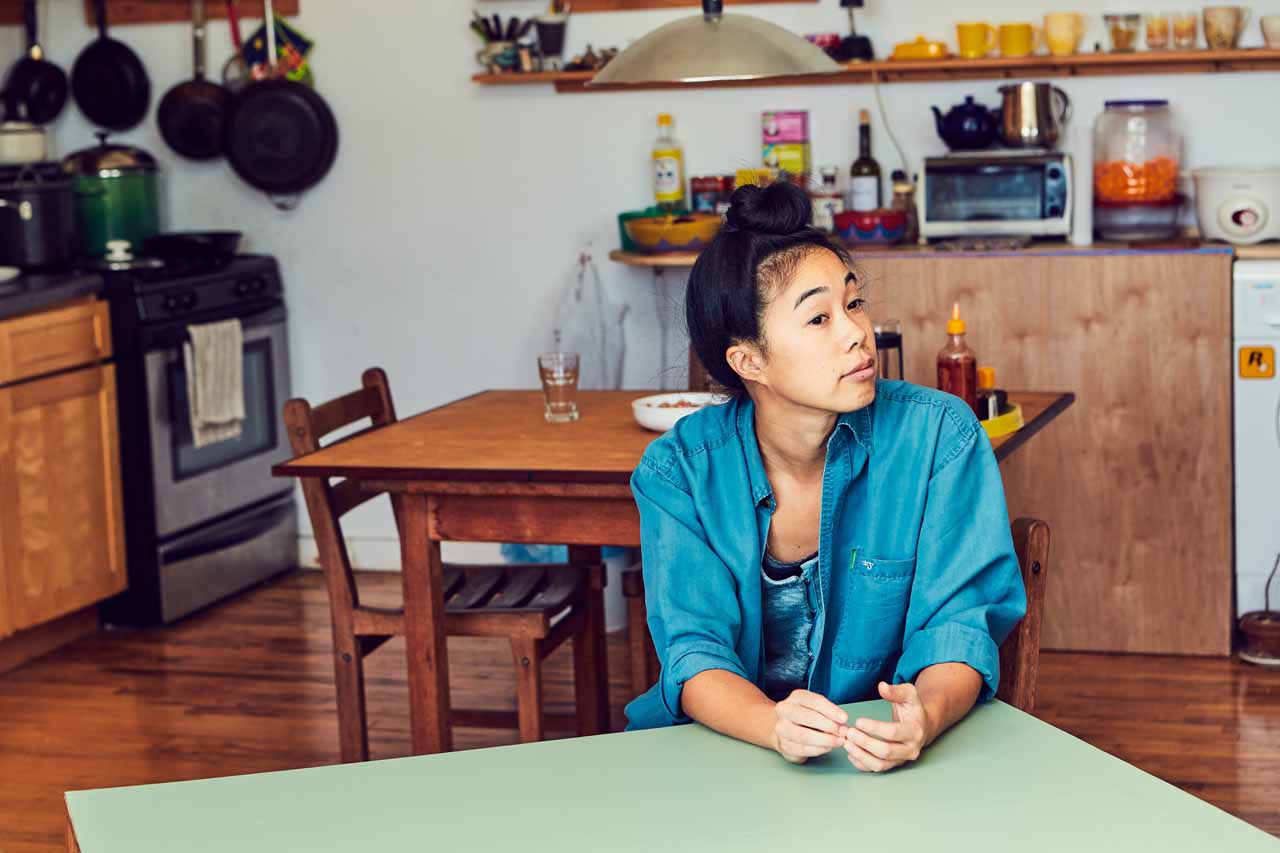 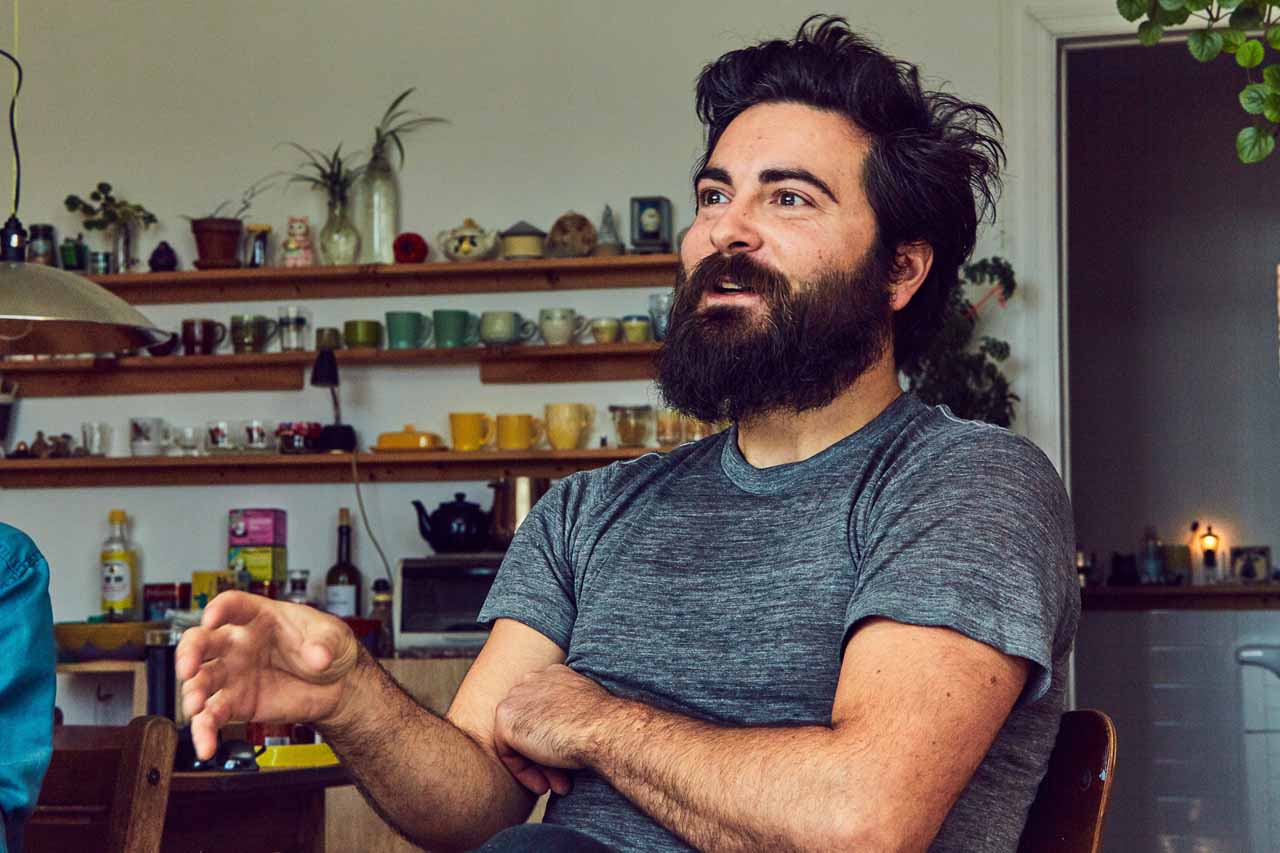 ADAM: In 2011, September, on a rainy Saturday night (laughs) we went independently with different friend groups to Winnie’s in Chinatown. We were singing songs and noticed each other. After the night wore on I creeped in on a song Terri was singing. That’s how we met and then we started dating shortly after that.

TERRI: When we met I was really ready to meet someone.

TERRI: I was open to talking to a stranger. We met at Winnie’s and he came up to me after singing and told me that he thought I was beautiful. My friend told me I should go talk to him, I did and we were standing outside and then went for a walk around Little Italy. Adam told me 3 things about himself: he’s divorced, he loves animals, and he’s dead single. I was like oh… this guy sounds kind of cool. From there, for me, maybe two days later I happened to be in the neighborhood where he worked, so I dropped in. I did all of these things I probably wouldn’t typically do.

ADAM: and I was like oh someone likes me! Then we had some ‘let’s get some wine and hangout dates.’ Terri’s middle name is ‘Pao-Tien’ so I took Batman’s “POW!” and made “PAO!” from cut-out paper, framed it and gave it to her.

We met at Winnie’s and he came up to me after singing and told me that he thought I was beautiful. 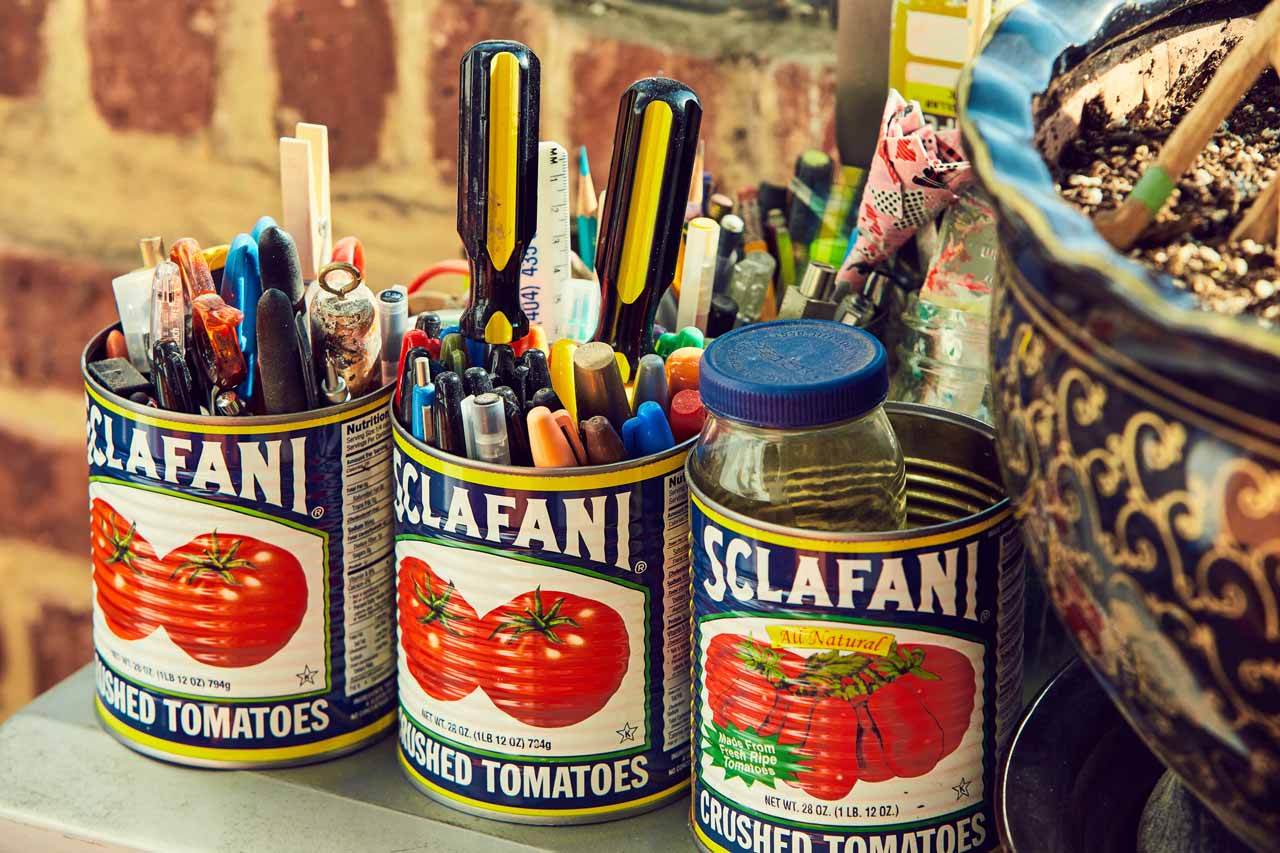 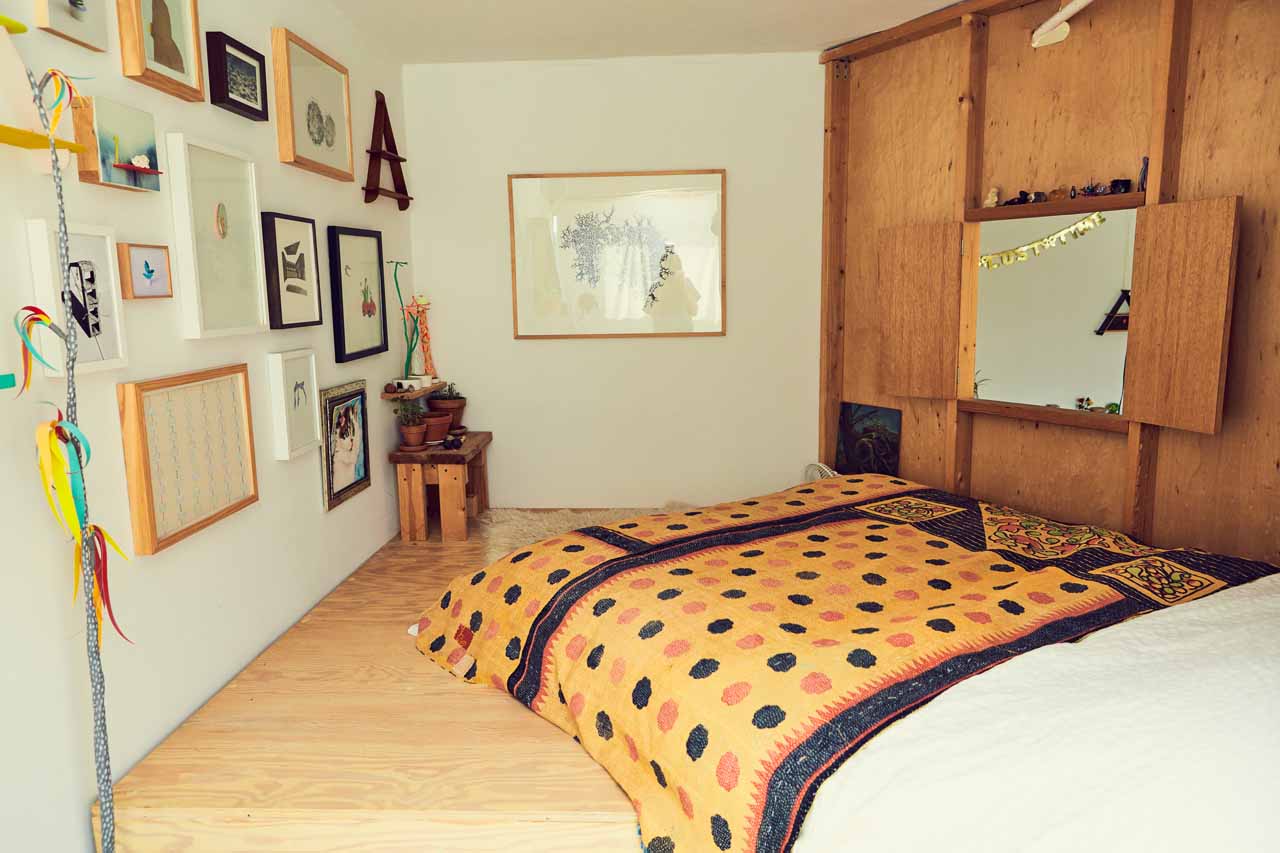 TERRI: When we met I had just left my full time job as a designer at an office/studio and was starting to switch from seeing myself as a designer to seeing myself as an artist and ultimately what that might mean for me. I wanted more freedom in the work I was doing. When Adam and I met, he was the first person I introduced myself as an artist to. A lot of the ways we would hang out, we would make little funny things. It started a lot with cooking. The first thing was making a frittata and I was really into single colored foods. We made a pink frittata. I asked him to cut up some cherry tomatoes, and I turned around and he had arranged them in a constellation. In my head I thought, “He’s the one.”

When Adam and I met, he was the first person I introduced myself as an artist to. 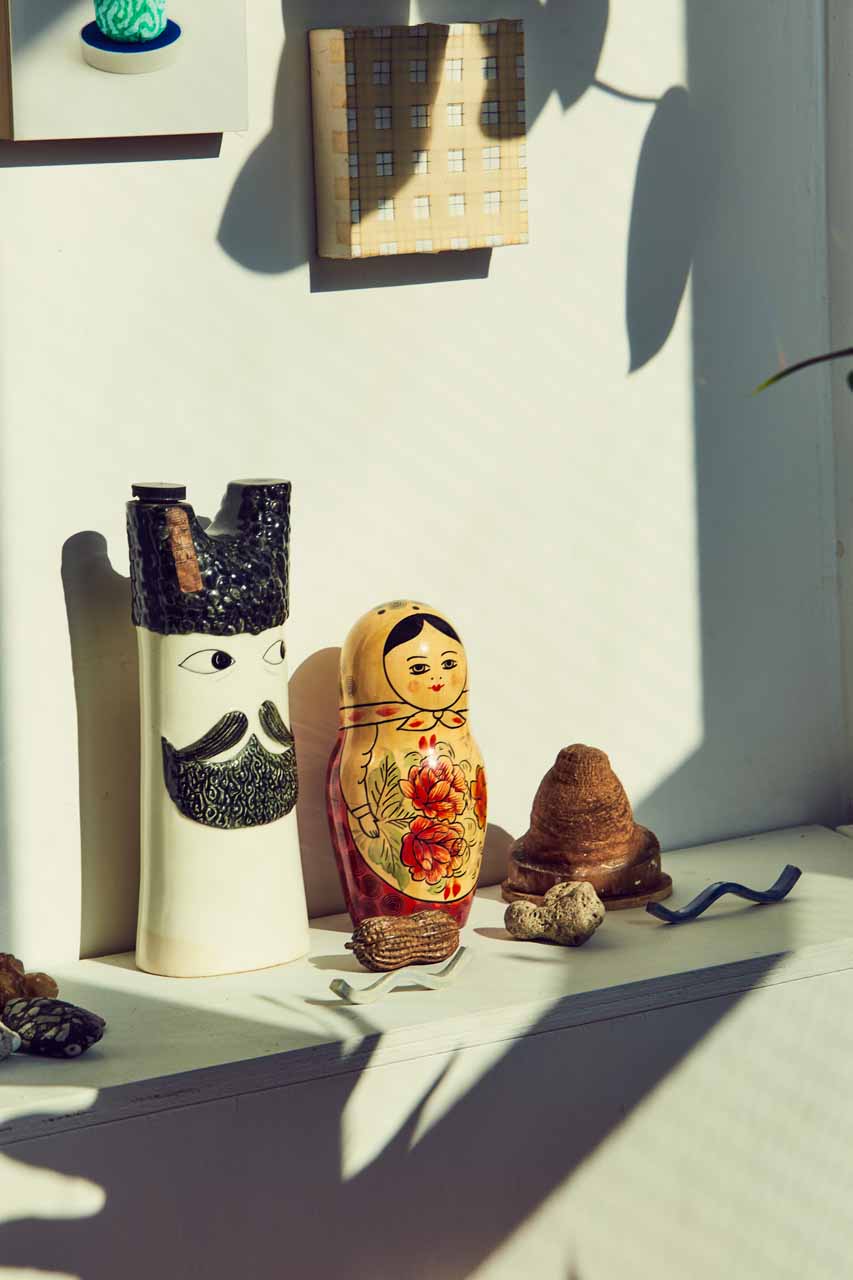 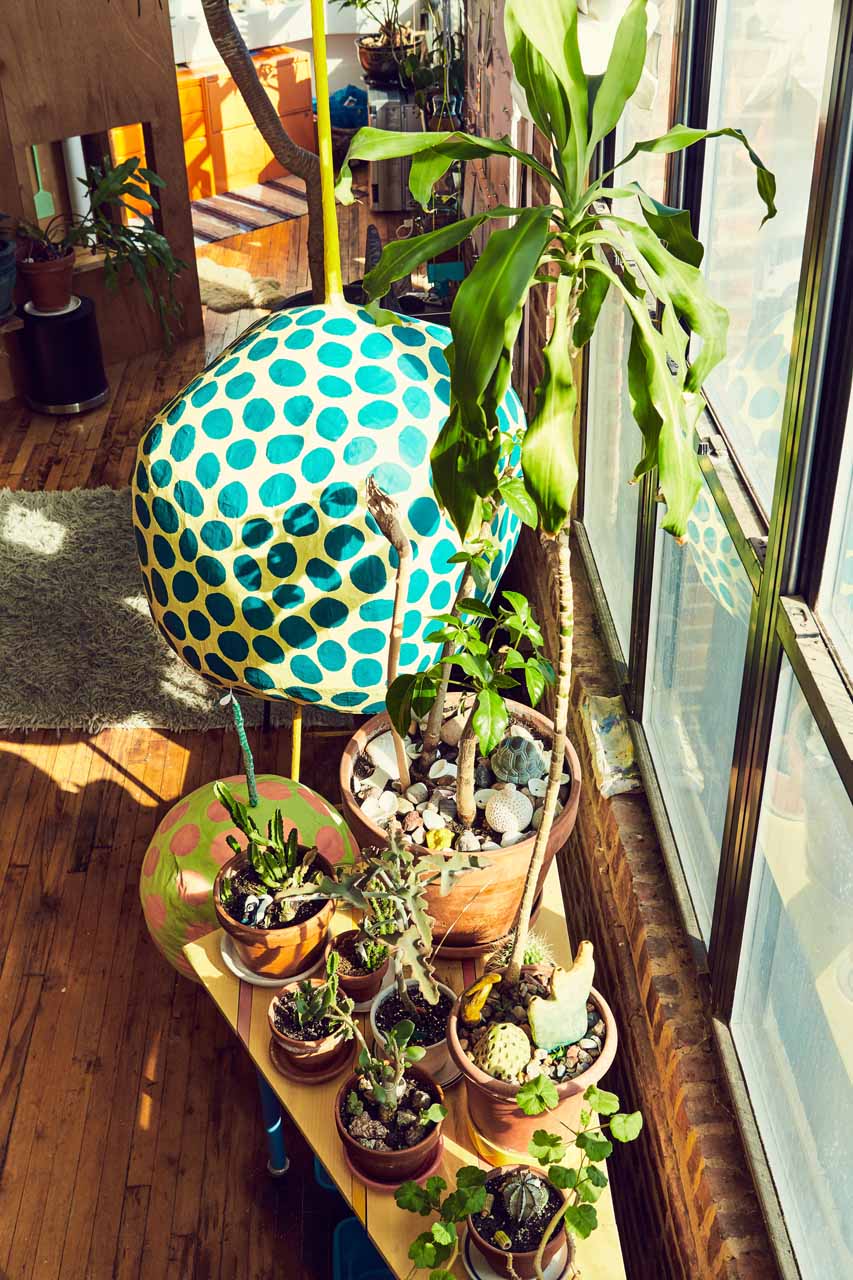 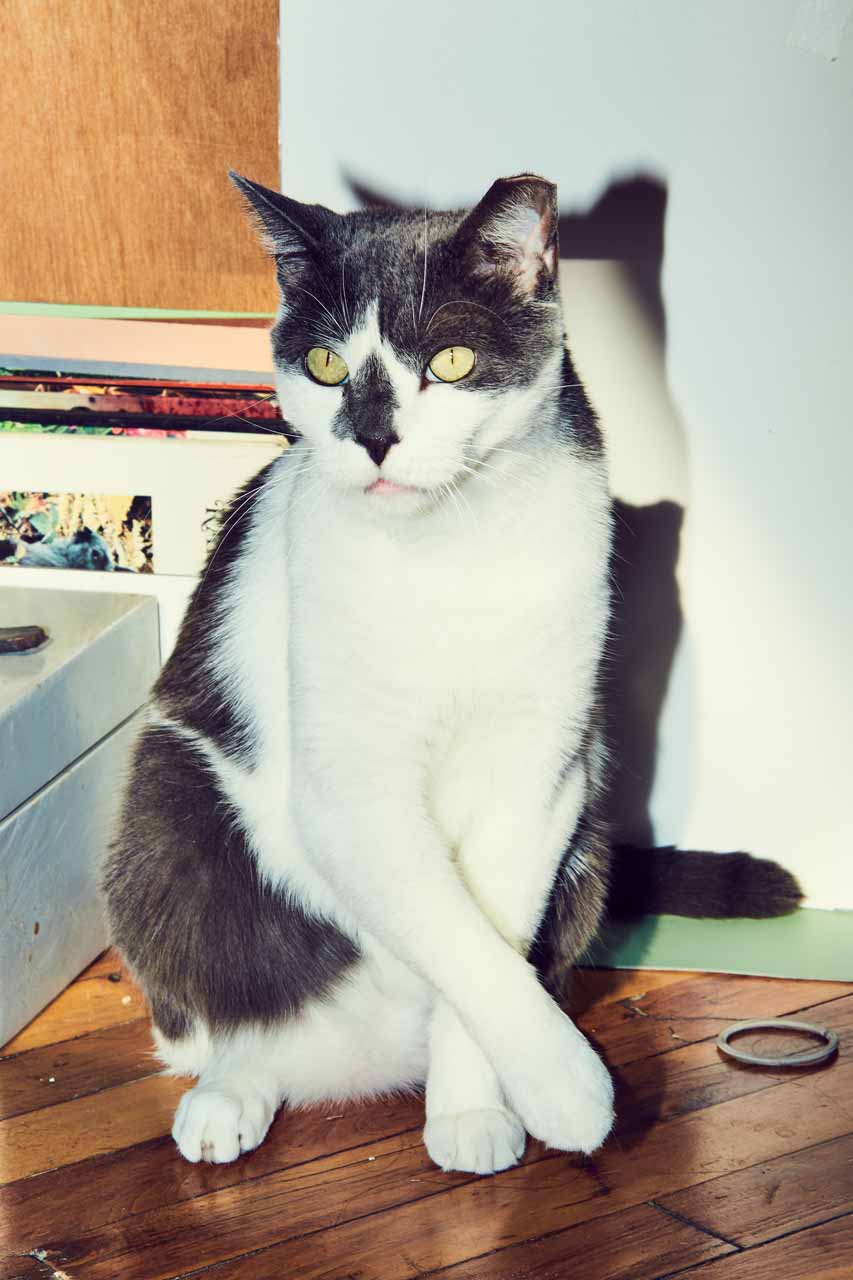 TERRI: One of the collaborations we did was make pancakes. I was trying not to eat gluten at the time, which was really difficult. The pancakes we made weren’t fluffy but they had these cool patterns on them so we thought they would look really cool as prints. So we rolled ink on them and made prints. I think we encourage each other to actually do the "stupid" ideas. That was the first thing that we made together that was starting to enter the collaborative art.

ADAM: We treated our play seriously. The next day, Terri was working on a model for this web project called Parallelograms. Parallelograms will give an artist an image and the artist will respond with an interactive image that is put on the internet. Terri had to build a model and she wanted to put house plants in there rather than a figure to show scale. So we started making paper plants. We photographed them on 8.5 x 11 seamless on our iPhones. We had this little portfolio of sculptures that we used to apply for different opportunities. That was our first project together. Wave Hill is a garden in the Bronx that showcases emerging artists. It was the first opportunity to discover the challenges of making something like this.

I think we encourage each other to actually do the "stupid" ideas. 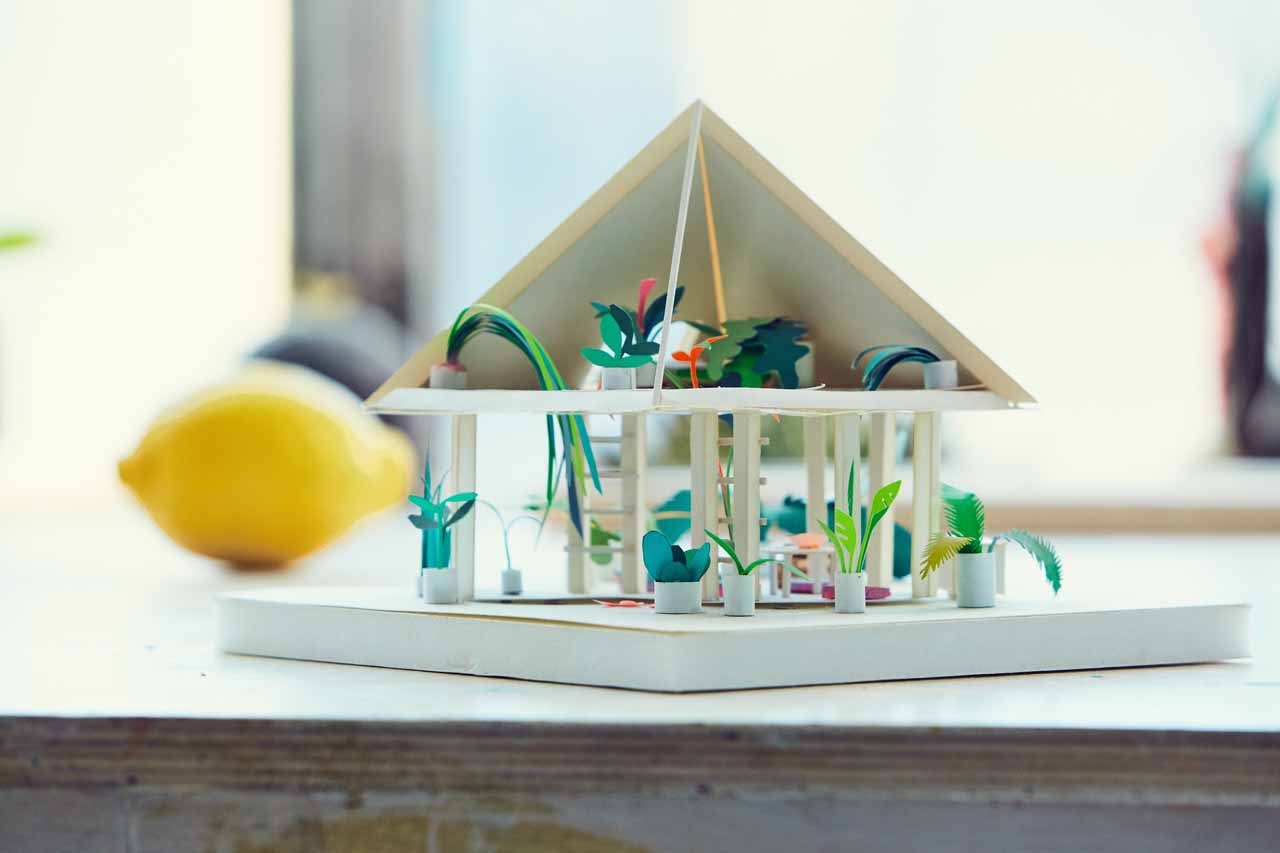 ADAM: Before we actually lived together we were spending every night together but had two apartments. Then we had to accept ‘ok, this is going to happen.’ There was even a year where we were going to move in and Terri went to see a movie and had a slight existential crisis, I got a phone call and she was like ‘I’m not ready.’ and I was like ‘Are you breaking up with me?’

TERRI: I think it had a lot to do with the fact that I had an extra room that was being Airbnb’d and we were working together and his apartment had become a solace. So the thought of everything being in that one place and not having anywhere else to go felt too small.

ADAM: In the long run, it was a good thing. A slow transition. 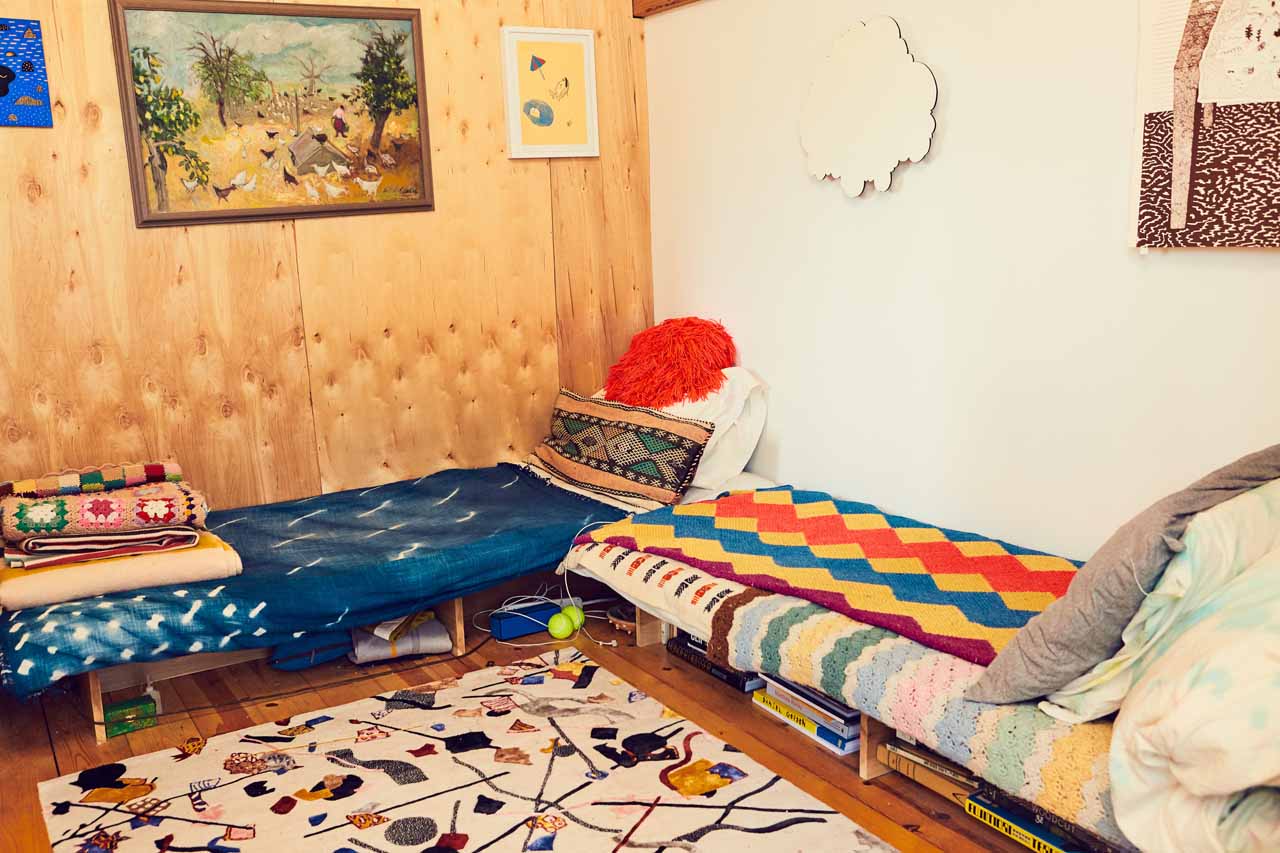 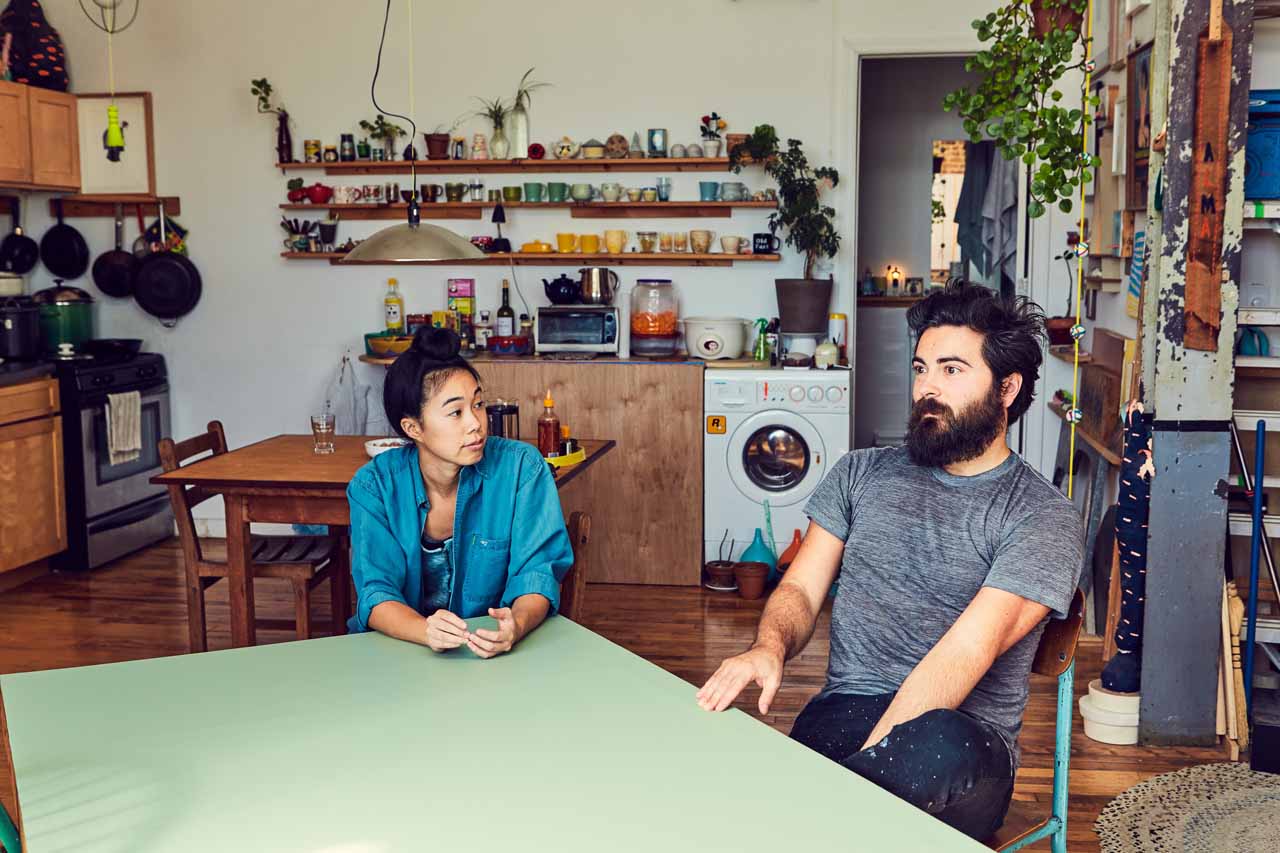 TERRI: It was pretty gradual. For the first couple years we kept the cost down of having our own studio together so we had part time jobs and spent the other part of our time making silly experiments together. Two years ago we got commissioned to do a large public art piece at Adam’s alma mater in Florida, and that was the thing that led us to both agree to quit doing part time gigs.

ADAM: The distractions of our jobs and Airbnb-ing would have prevented that project from ever fulfilling itself. It was a necessity to shut down distractions. Since then it has been like ‘What’s next?’ and we don’t always know the answer to that.

TERRI: The Paper Plants have made a long life of itself. It was one of the first things we did and every time we change scales or mediums, there is another aspect of that work to investigate. I feel very connected to the subject matter. We love going for walks and being outside. We love places that have beautiful rocks and beautiful trees. The paper plants project has kept us connected to those things.

ADAM: When we talk about inspiration as a word and try to define it, it is often about the origin of a project or the end product. I think everywhere in between there the inspiration has to exist and remain vibrant and active. You don’t isolate inspiration.

We love going for walks and being outside. 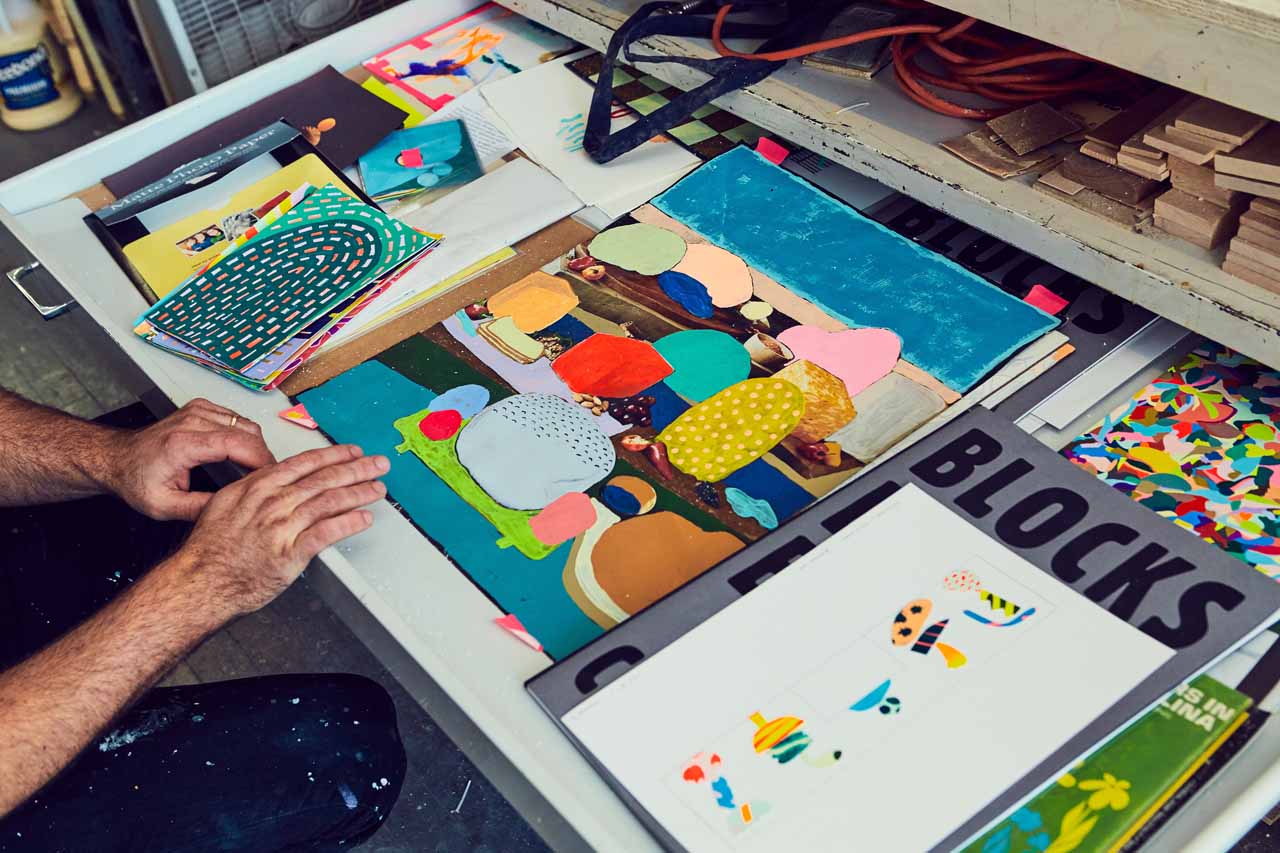 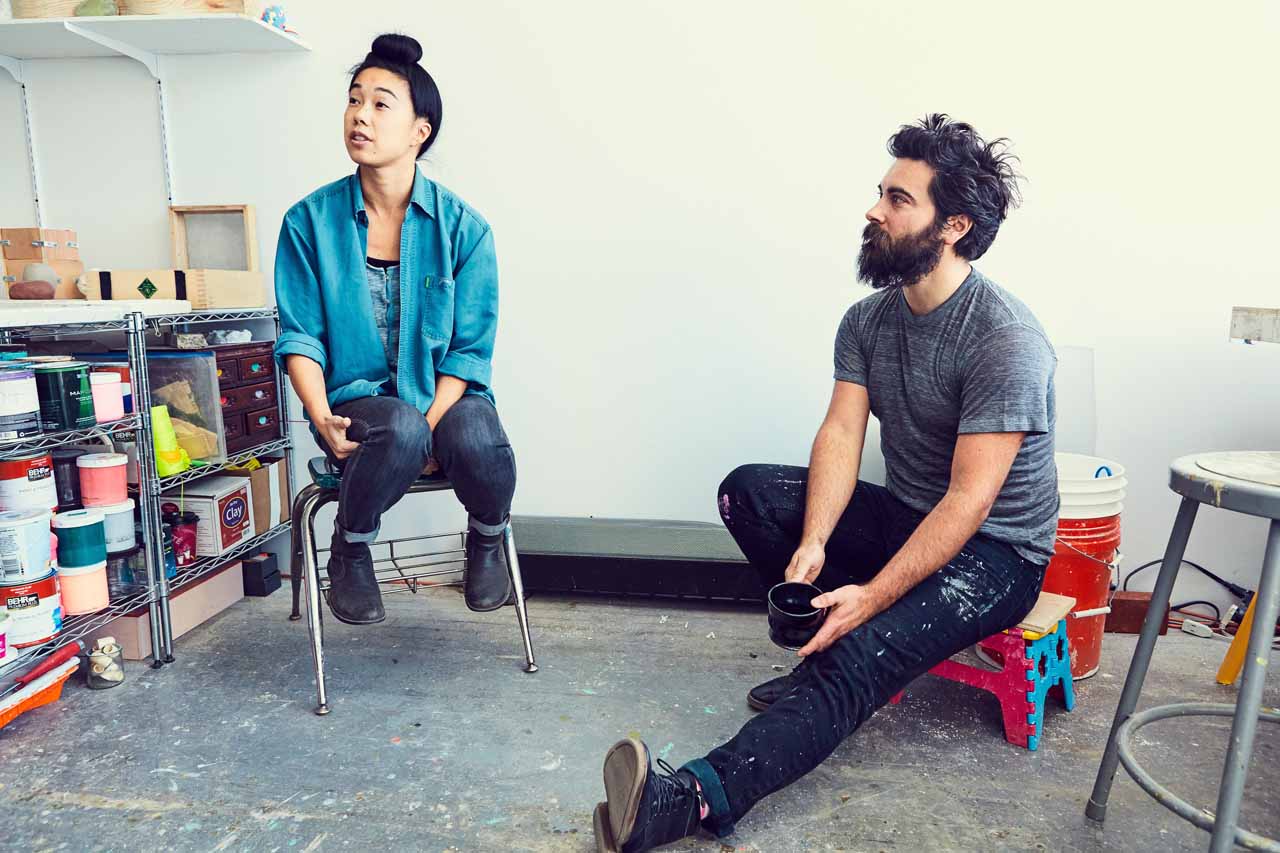 TWP: How do you balance growing individually with growing together?

TERRI: One thing that is really important that we set up is that when we go on residencies, which we try to do once a year to get out of our routine and explore new ideas, is that for the first part of that residency we de-collaborate and explore our own ideas independently. It has been really important to give ourselves some independent thinking time. Sometimes really great projects come out of that and often it does evolve into work that we do together. A good example is the Cairn project, the large public stone piece in Florida. It started on a residency one summer.

ADAM: I was collecting stones from a riverbed, painting them, and photographing still lifes of colored rock stacks. Later, we took the same stones and used a mold to make multiples of those stones in concrete. Our first Instagram post is the sculptures made from those concrete stones.

TERRRI: A lot of times we work in between different scales. Often times people will ask us to make a sculpture that they’ve seen of ours bigger. We’re not premeditating that transition from a model to something else, but often that happens.

It has been really important to give ourselves some independent thinking time. 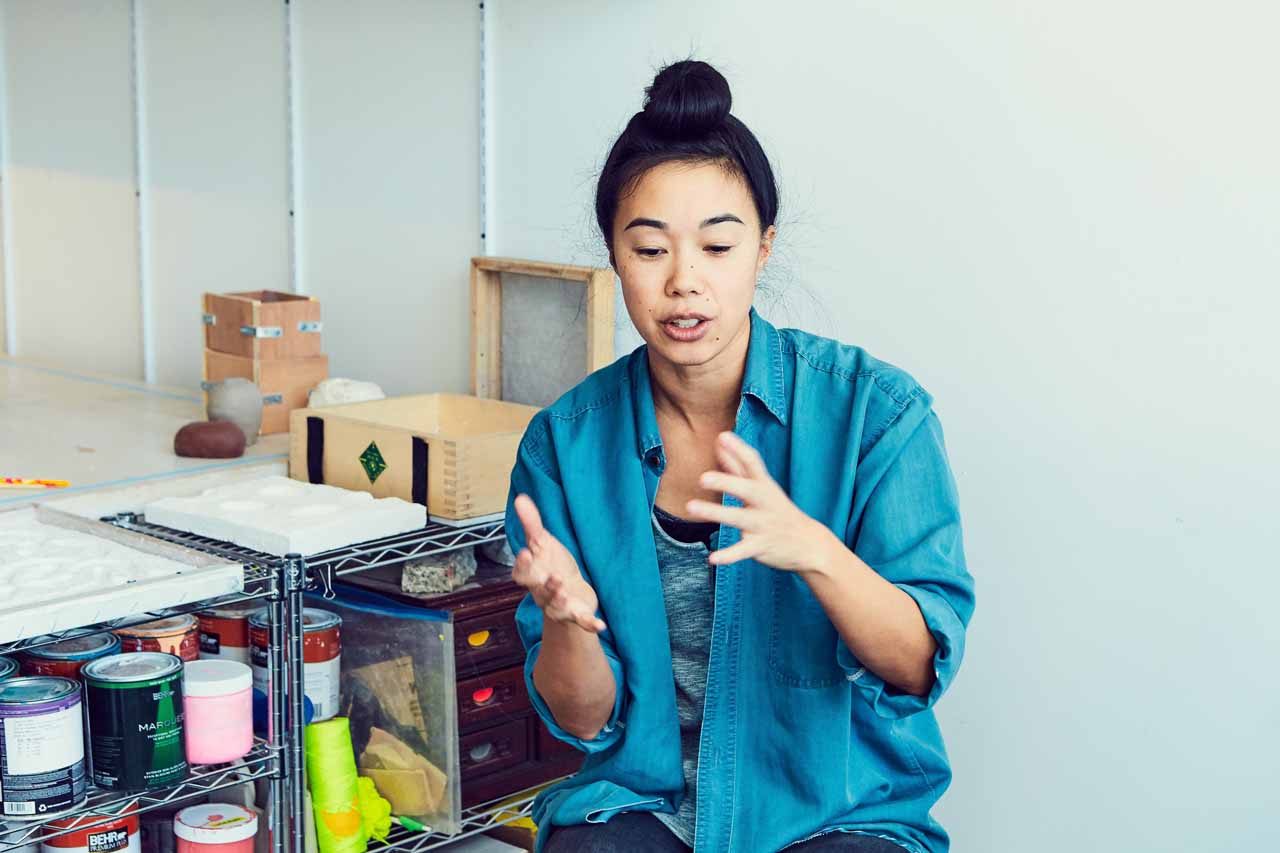 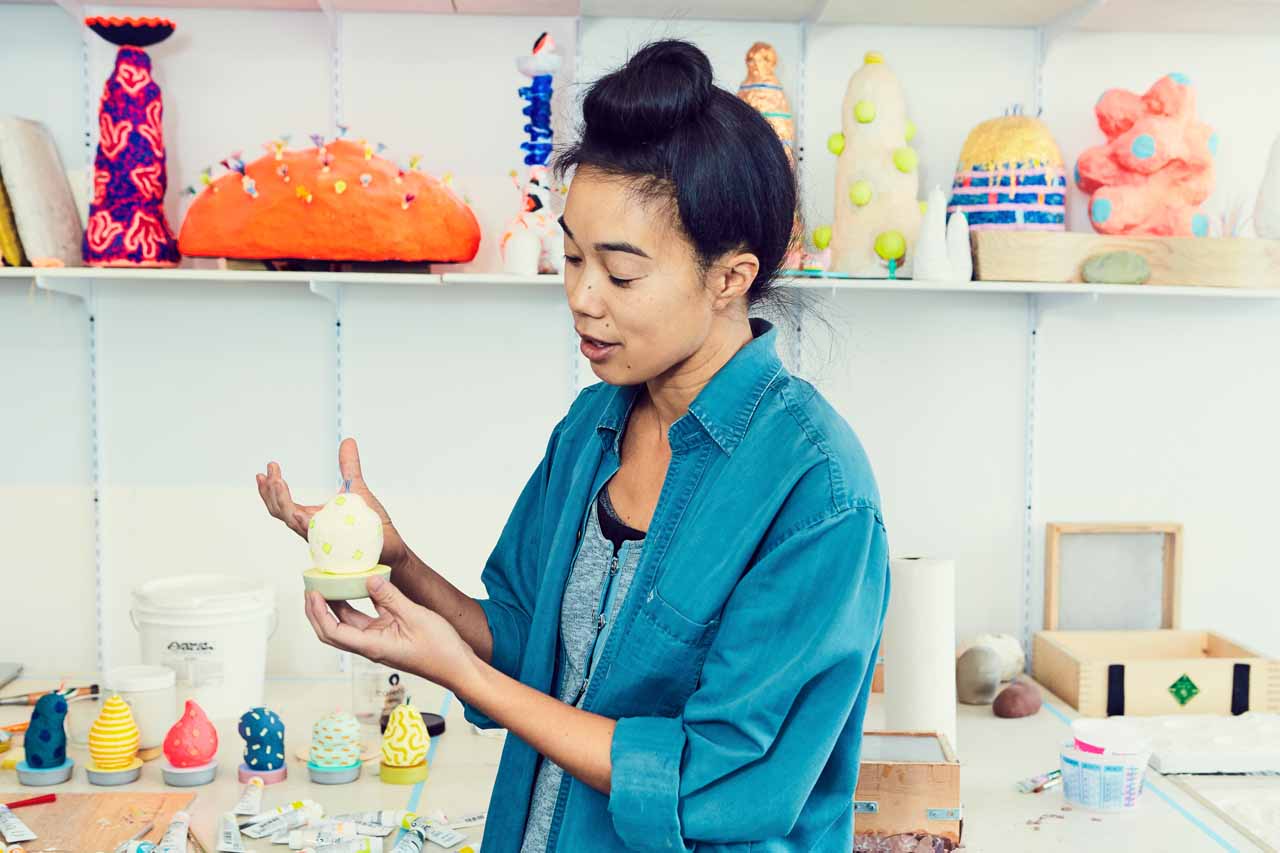 TERRI: We have to make a schedule for ourselves, it’s easy to forget what you have to do.

TWP: How important is having a mentor?

ADAM: Super important. One of our great friends is this painter Arnold Mesches, 93 years old. He was one of my professors in grad school and he has been a wonderful, tough love mentor. People who persevere are artists. 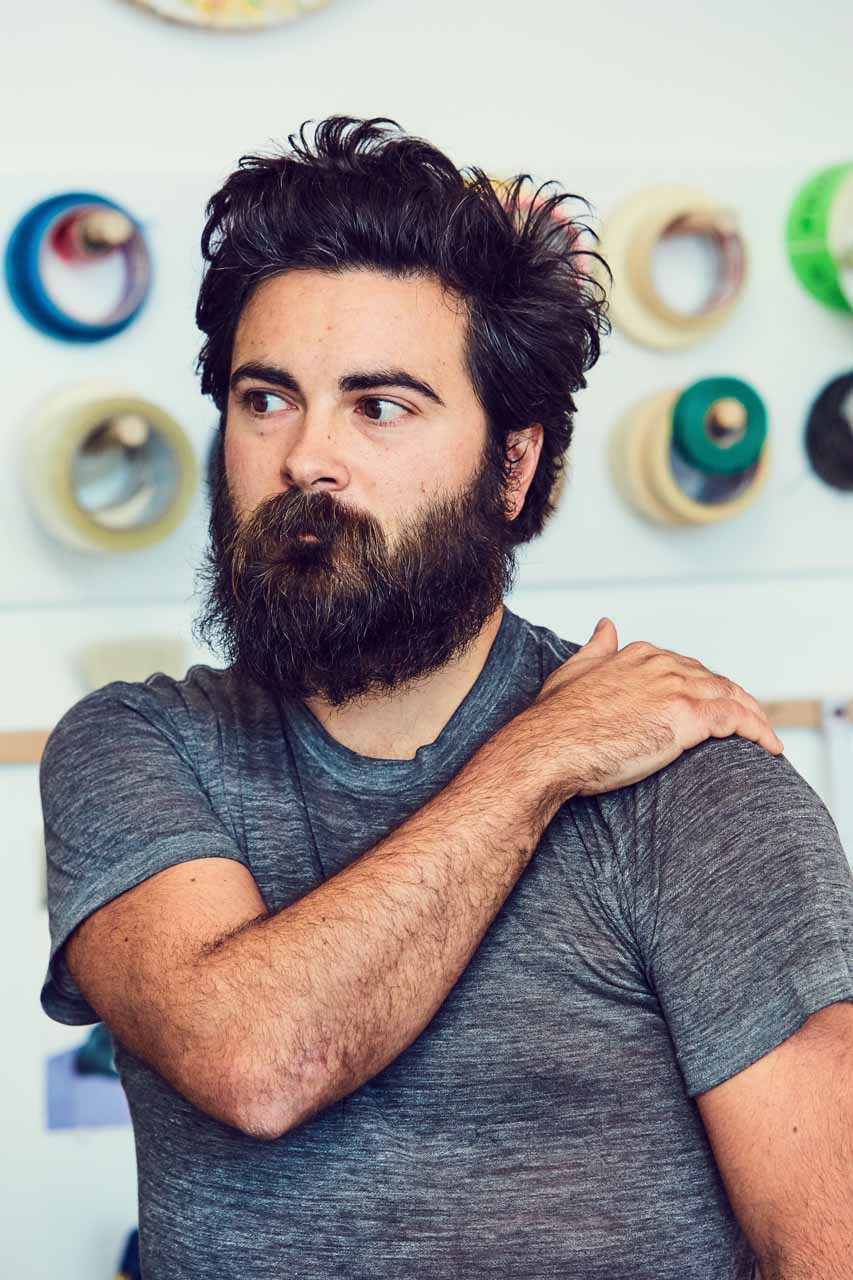 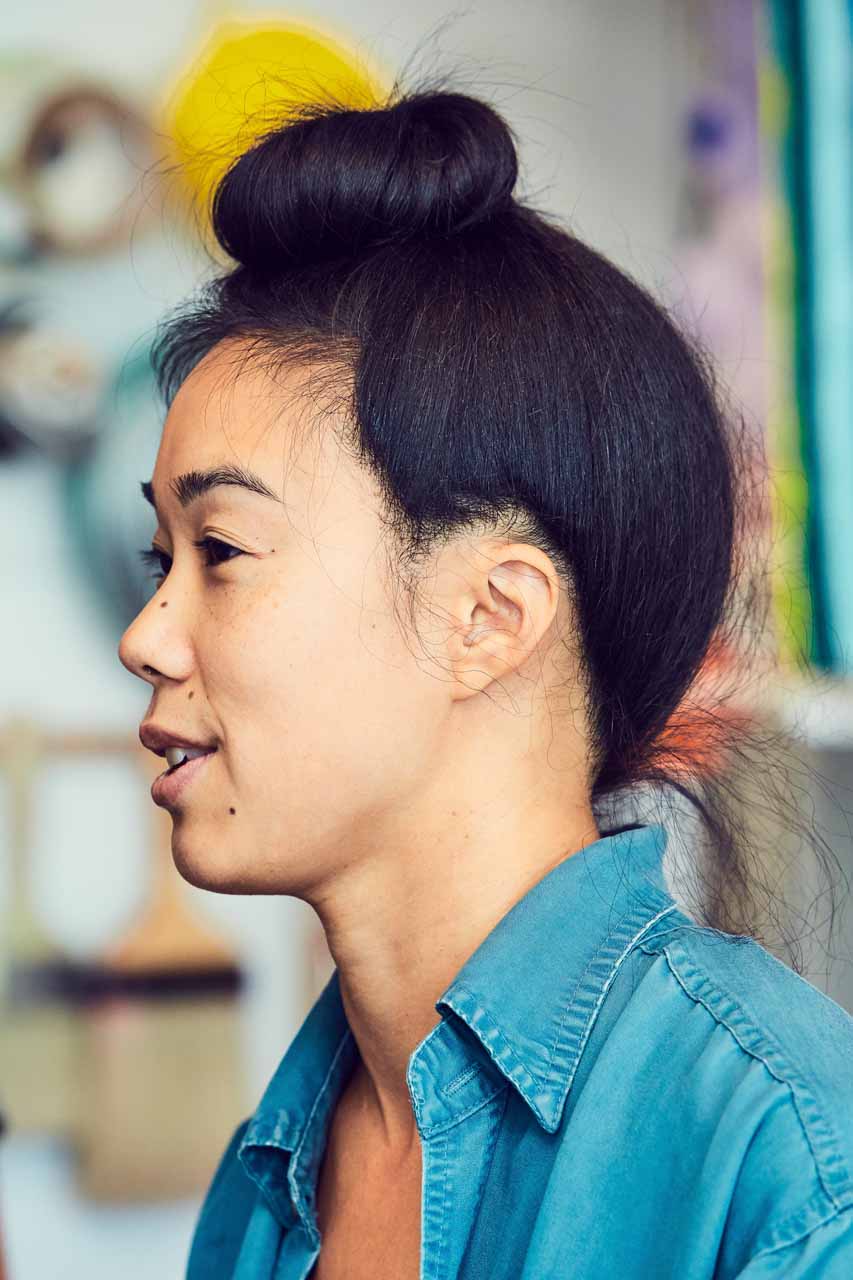 ADAM: We spend every minute together. Whenever it’s Valentine’s Day, we’re just like it’s like every other day. For the first three years - I think it’s still on the calendar --

TERRI: “Hot Date Night” there was too much pressure. We changed it to ‘Time Together.’

ADAM: Recently we were invited to this little house that organizes groups of families that work together, and it came up that some people want to turn the switch off and not work, just be together. I likened it more to a dimmer. There are times where we have to really work. If the work dims down, we can be more together. We’re never checked out.

TERRI: In my past relationships that didn’t work, I’ve been critiqued for taking the person for granted. In this relationship, I’ve been aware of not doing that. That translates to recognizing each other, and recognizing what the other is doing for themselves and others.

ADAM: And a generosity of spirit. We’re equally as focused on what each other is getting. I feel lucky that we’re not bean counters. It’s not ‘you cook dinner, I’ll do the dishes.’ Maybe this month I’ll cook dinner and do the dishes and you’ll feel the flow and just know when it’s your turn.

We’re equally as focused on what each other is getting. I feel lucky that we’re not bean counters. 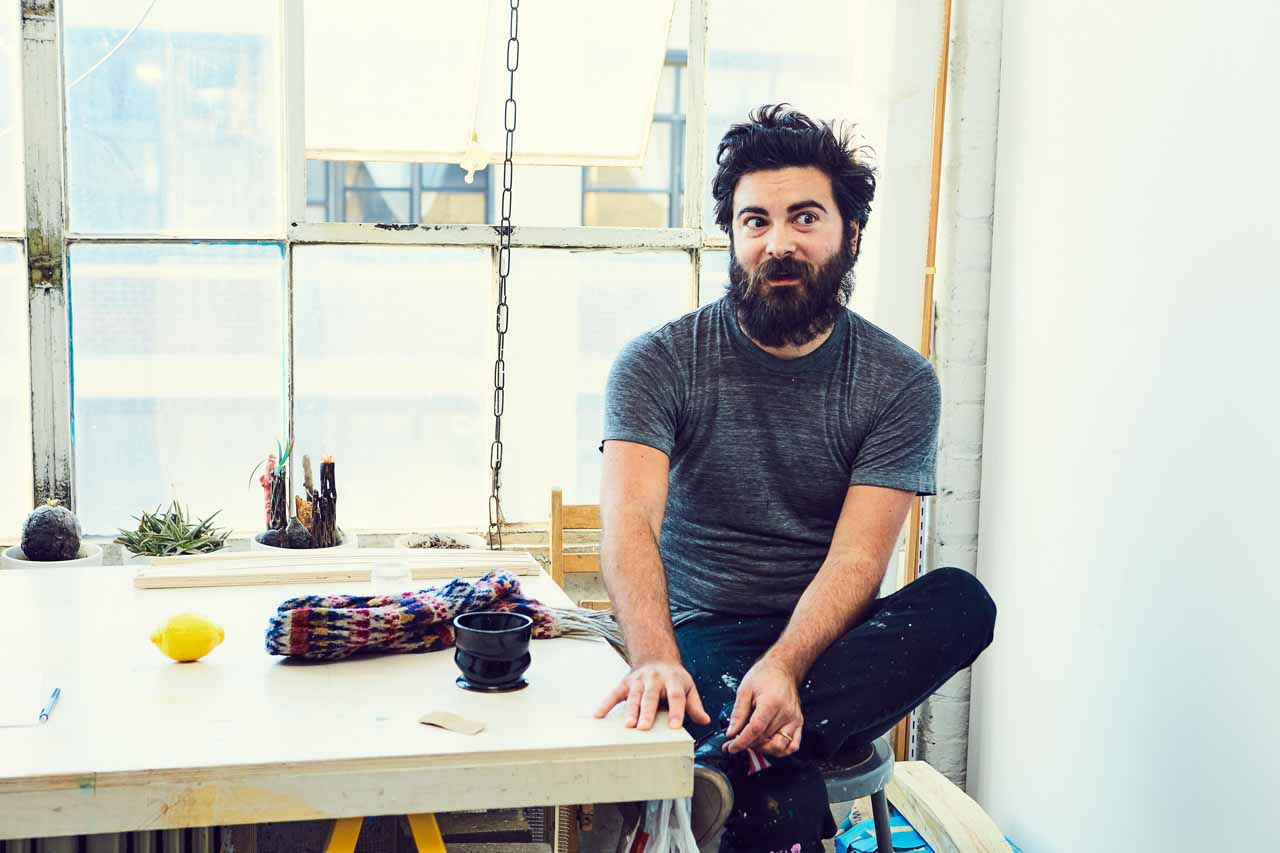 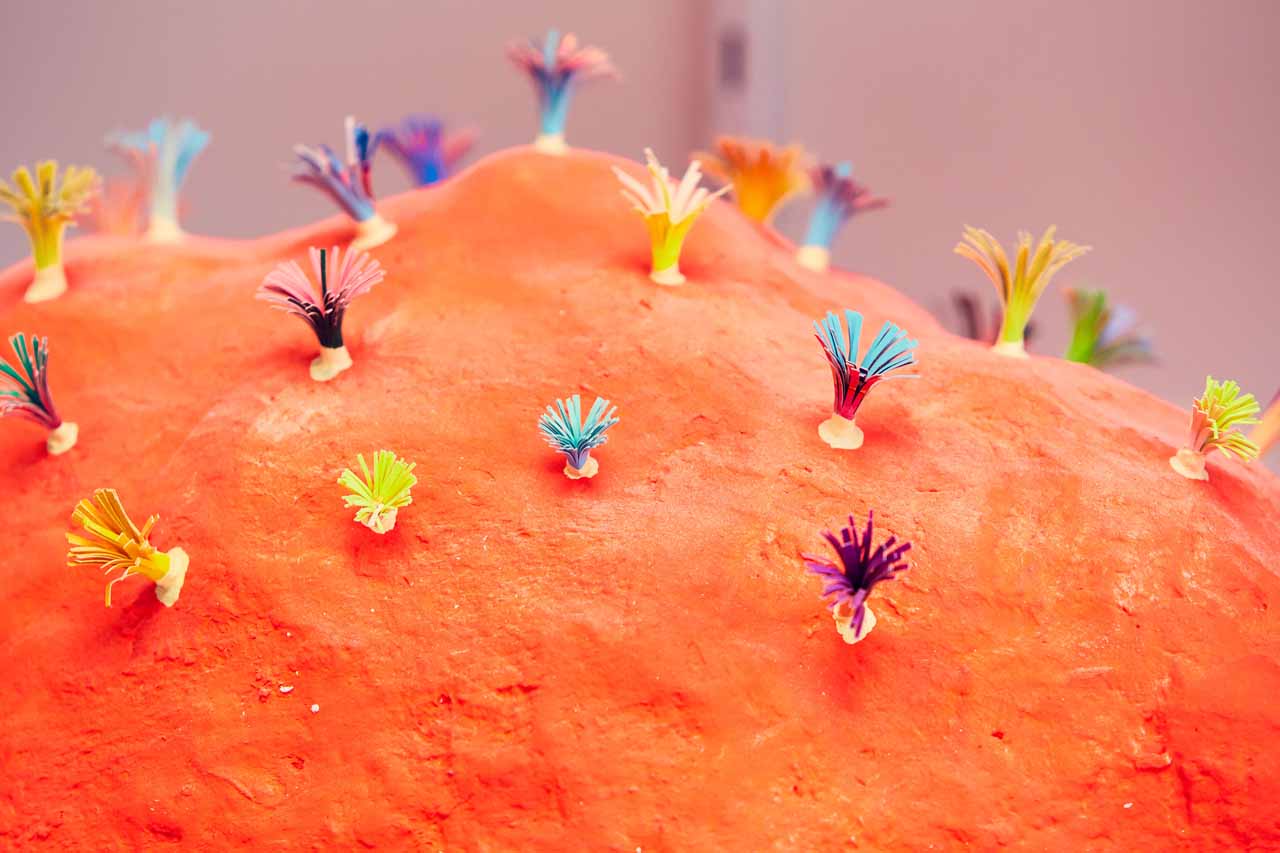 TWP: Do you ever have any disagreements?

ADAM: We have this thing now that we use as a phrase ‘paint it blue.’ Often we will be working on multiple things at once, talking but also thinking through it together. It starts to get a little confusing when streams of thought are crossing over. I held up this object and said I think it needs to be yellow, and she said paint it blue. After multiple coats of paint, I held it up and said I think it needs to be blue, and she said ‘I said that an hour ago.’ So sometimes we don’t immediately see what we need even when encouraged or told that’s what it needs. So whenever we start to have a disagreement, we say ‘paint it blue.’ 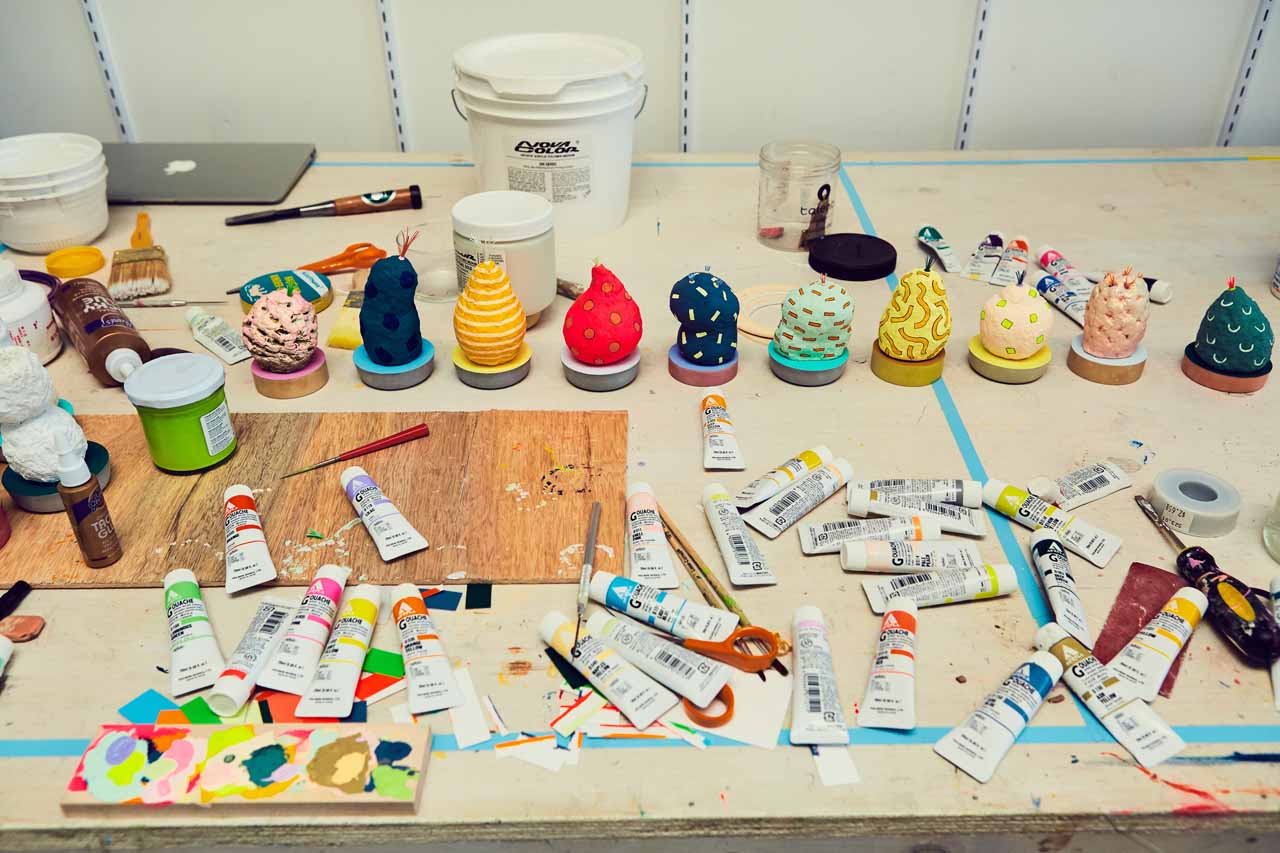 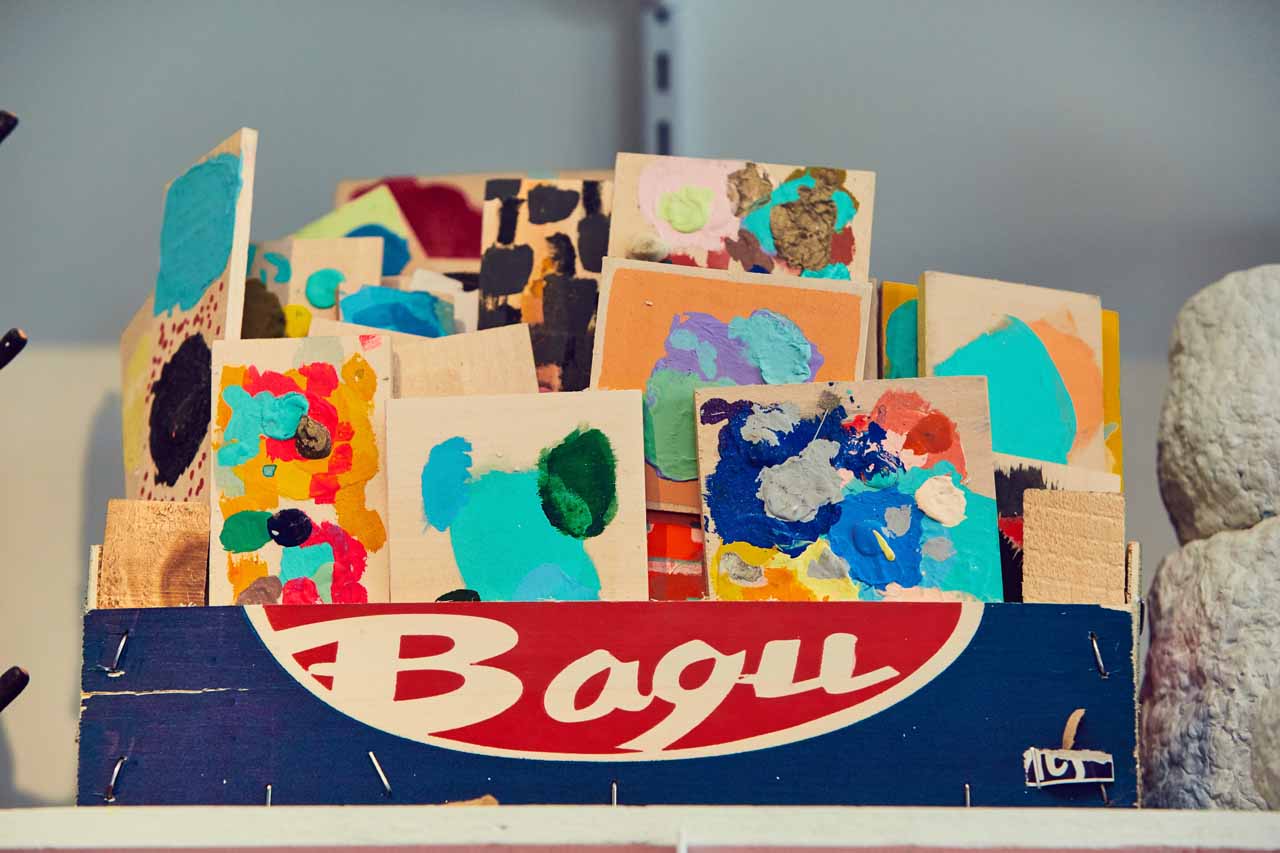